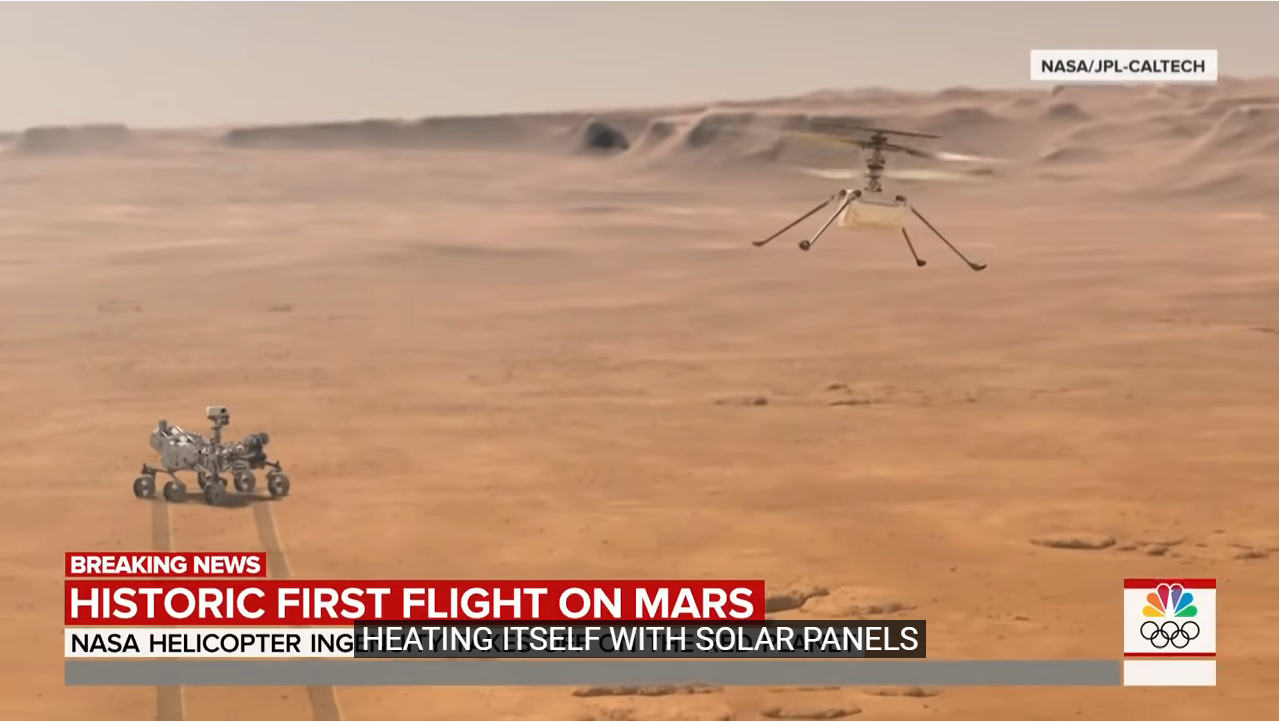 Two months ago, the rover Perseverance arrived on the red planet in a picture perfect landing. Now, at about 3:30 AM EST, its tiny rotorcraft took its first flight on a different planet successfully! Being the geek that I am, I can’t wait for more footage from its future flights as it goes exploring. 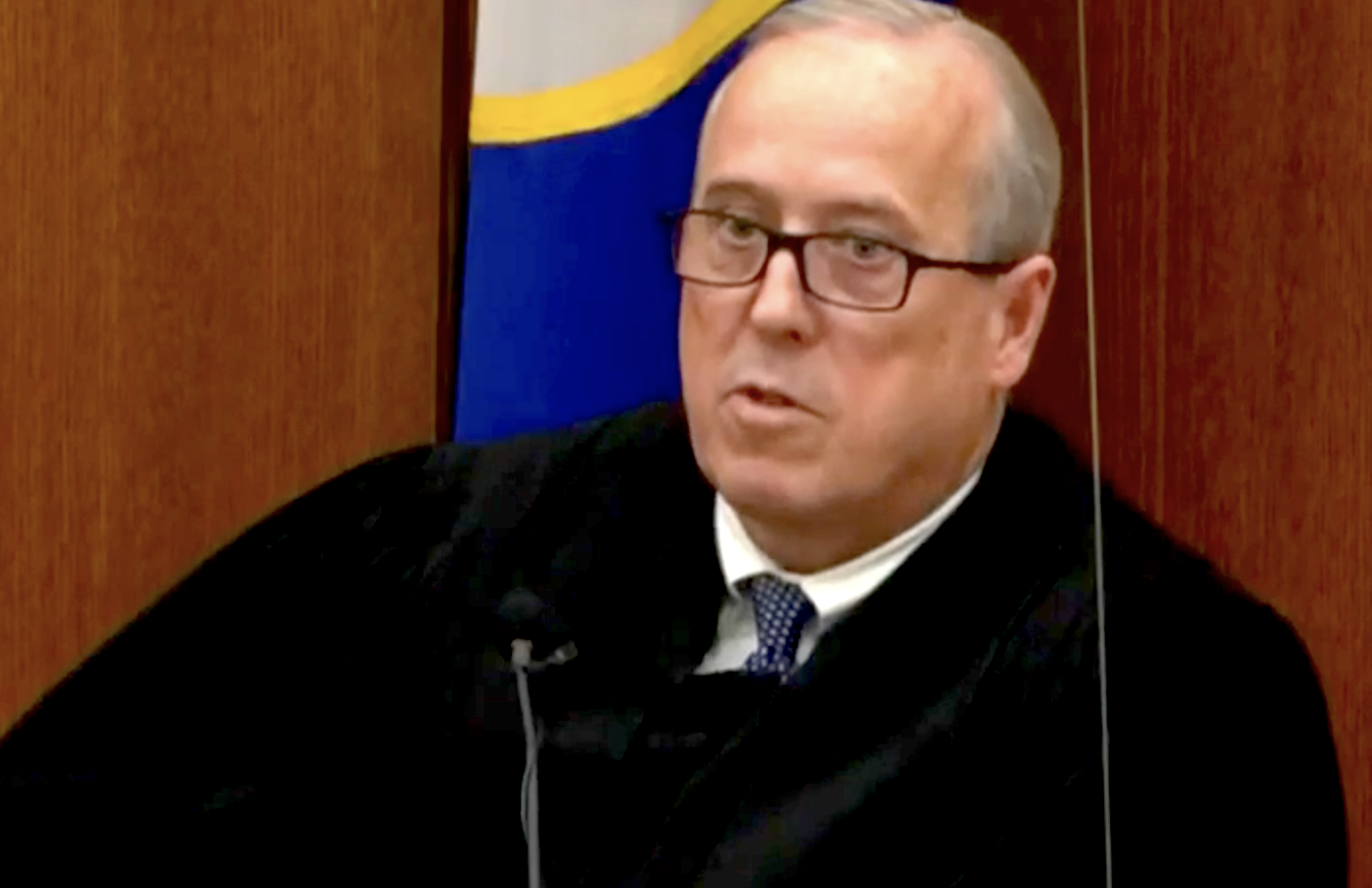 Over the weekend, right wing media apparently had a field day with an interview Rep. Maxine Waters did while she was at a protest for Daunte Wright. In typical right wing media fashion, they ripped her words out of context in order to gin up a racist rant about the things she says.

I haven’t been able to find a video from a neutral source, but I did find one that had the spontaneous questions and Waters’ responses without extra commentary. I’m not interested in feeding wingers’ YouTube revenues so I will link but not embed it for anyone who wishes to watch. The controversial remarks begin at around the 7-minute mark.

Waters was asked by someone in the crowd of cameras how the George Floyd trial played into their call for justice.

At the time she was asked and answered these questions, she was not on the loudspeaker but instead in a gaggle of cameras. The questioner framed the question and she answered within that frame. 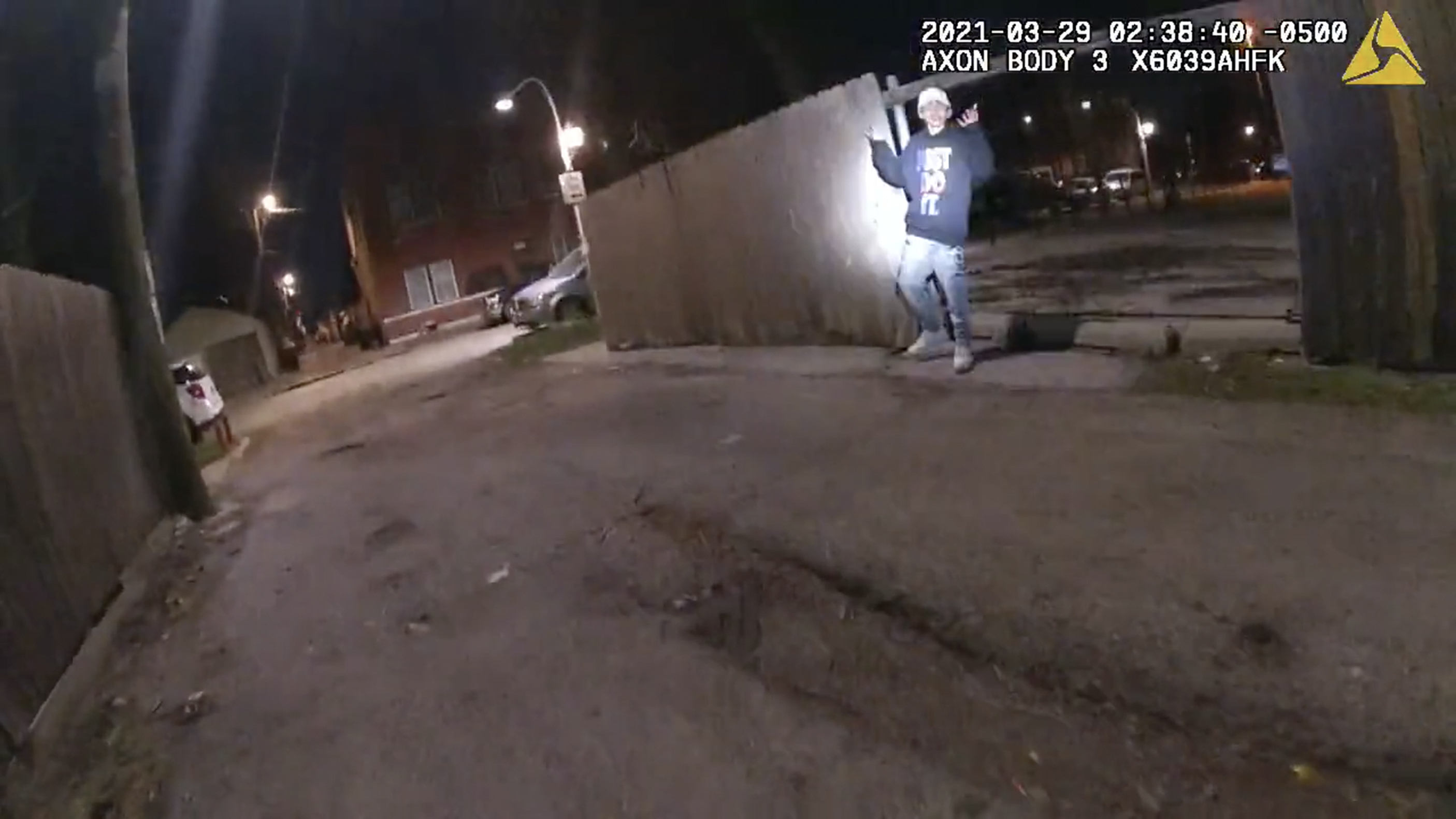 The death of 13-year-old Adam Toledo might well have made international headlines on March 29, 2021 – the day he was shot and killed by a police officer – had the emerging narrative been different.

Instead, early news reports of the incident relied on a police statement which said Toledo died in an “armed confrontation.” An image of a gun recovered at the scene was also released. During a bond hearing for the man who had been with Toledo when the chase began, prosecutors said a gun was in Toledo’s hand when police shot him dead.

Officers observed two subjects in a nearby alley, one subject fled on foot which resulted in an armed confrontation. One subject shot and killed. 2nd subject in custody. Gun recovered on scene. COPA investigating. #ChicagoPolice pic.twitter.com/bn7o2deAGS

END_OF_DOCUMENT_TOKEN_TO_BE_REPLACED 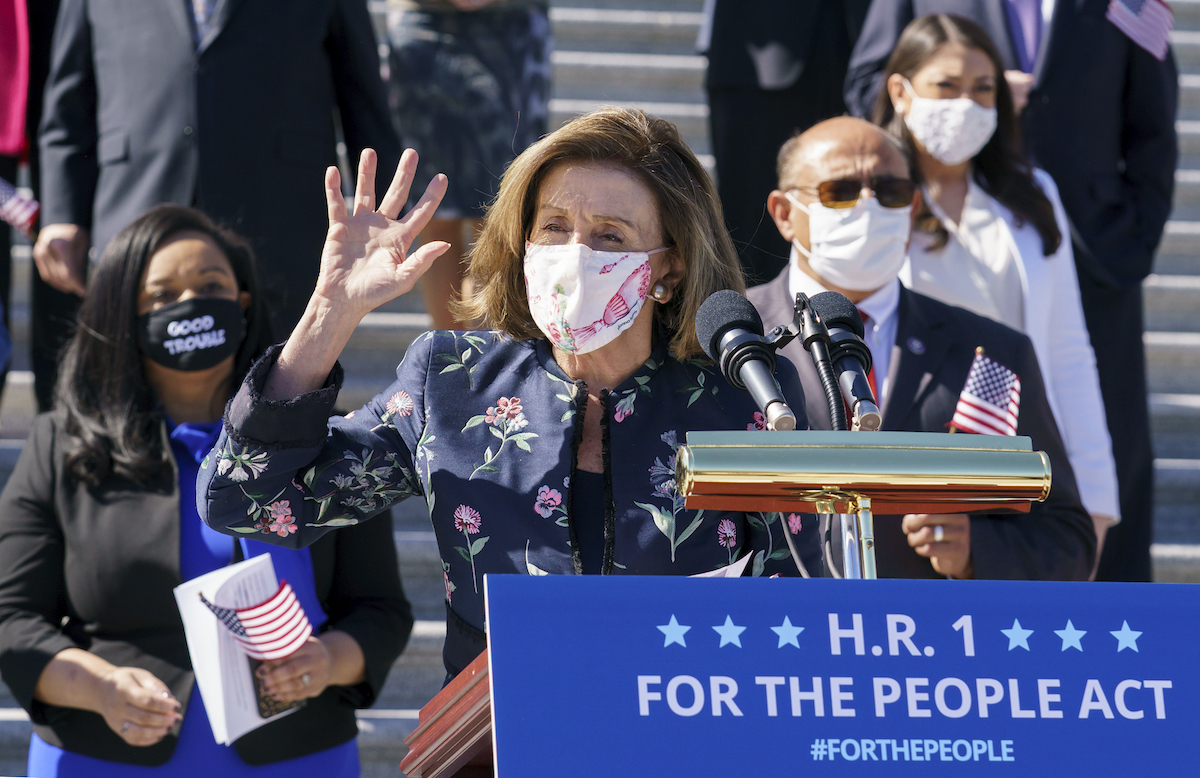 The recent national elections — conducted in the middle of the COVID-19 pandemic — highlighted difficulties Americans face to register to vote and cast a ballot. But the right to vote can be equally diminished when voters cast a ballot but their voice is diluted by gerrymandering and other means.

With the For the People Act of 2021 (H.R.1), sponsored and passed in the House by Democrats and unanimously opposed by Republicans, Congress is now considering legislation to address many of these problems.

These are not new problems. In my experience as a voting rights attorney who teaches the subject in law school, most of the voting rights problems addressed by H.R.1 have grown unchecked over the past 15 years. They result from the Supreme Court’s rollback of key voting rights protections, and state and local actions that made it harder for certain groups of people to vote or to have their voices matter. 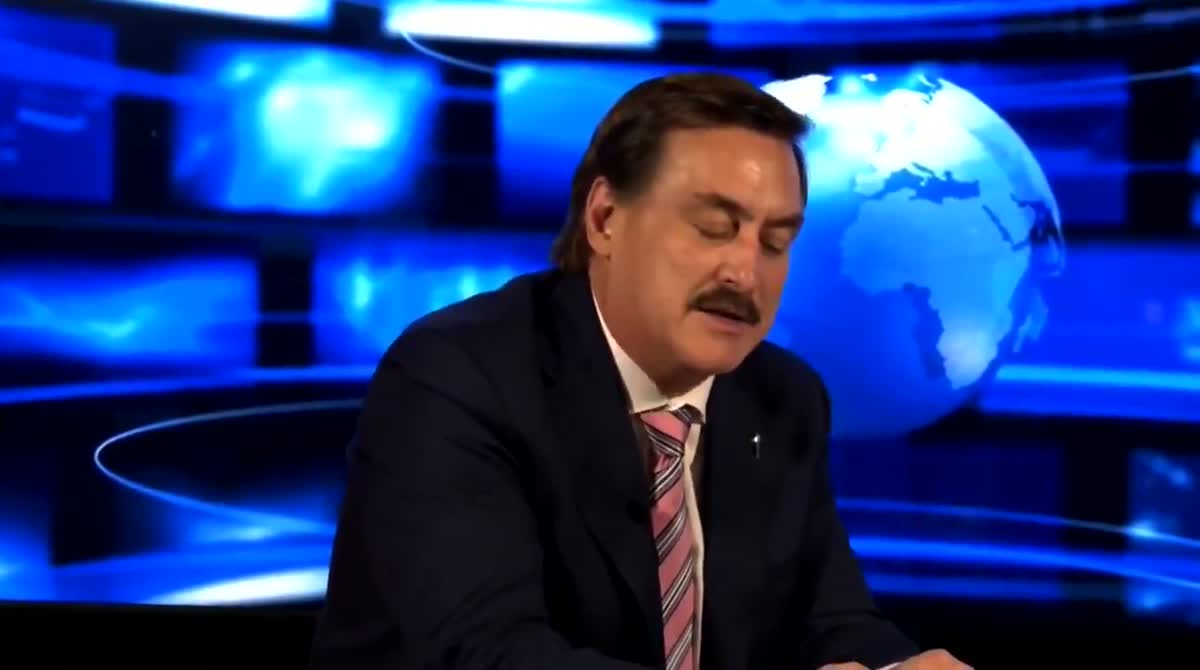 In what looks like a Mickey Mouse operation, MyPillow CEO Mike Lindell got several prank calls live while hosting his new social media platform called”FrankSpeech.” Lindell has run into a ton of problems trying to launch the platform and so is hosting a 48-hour “telethon” to encourage participation.

FrankSpeech claims to be a free speech site, but you’re not allowed to use profanity or take the Lord’s name in vain. So free speech? Not so much.

Lindell, who seems to have substituted his crack cocaine addiction for religion and love of TraitorTrump actually thought his Lord and Savior was on the phone.

A voice from his phone said, “Mr. Trump is on standby, are you ready?”

A beaming Lindell said, “We have the president here, our real president everyone. Hello Mr. President.”

The caller then launched a profanity-laced rant, causing Lindell to disconnect the call rapidly.

“You see what they’re doing,” Lindell whined. “They are attacking us, they are hacking into our phones,”

No, they just called in, because this operation is so stupid it’s easy to punk people. 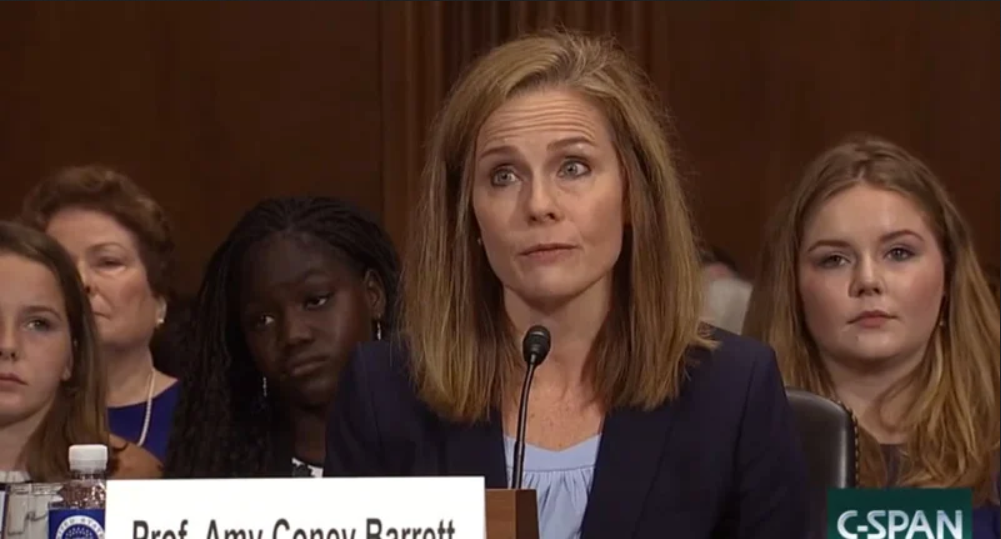 In case anyone doubted that the Supreme Court really needs to be bound by ethics rules they don’t define themselves, today’s news about Supreme Court Justice Amy Coney Barrett’s sweet book deal should cement that belief.

According to Politico, Justice Barrett has gotten a $2 million advance to write a book about how judges are to leave their personal feelings aside when they rule.

One of Politico’s sources notes that the figure was “an eye-raising amount” for a Supreme Court justice and likely the most since book deals won by Clarence Thomas and Sandra Day O’Connor.

Here’s something else eye-raising: That list of justices with fat advances are all conservatives — extreme conservatives. That advance likely came from an extreme book publishing imprint like Regnery or one of the others. Wingnut welfare comes in many forms.

It’s a payoff, it’s unethical, and it should be grounds for expulsion from the court. 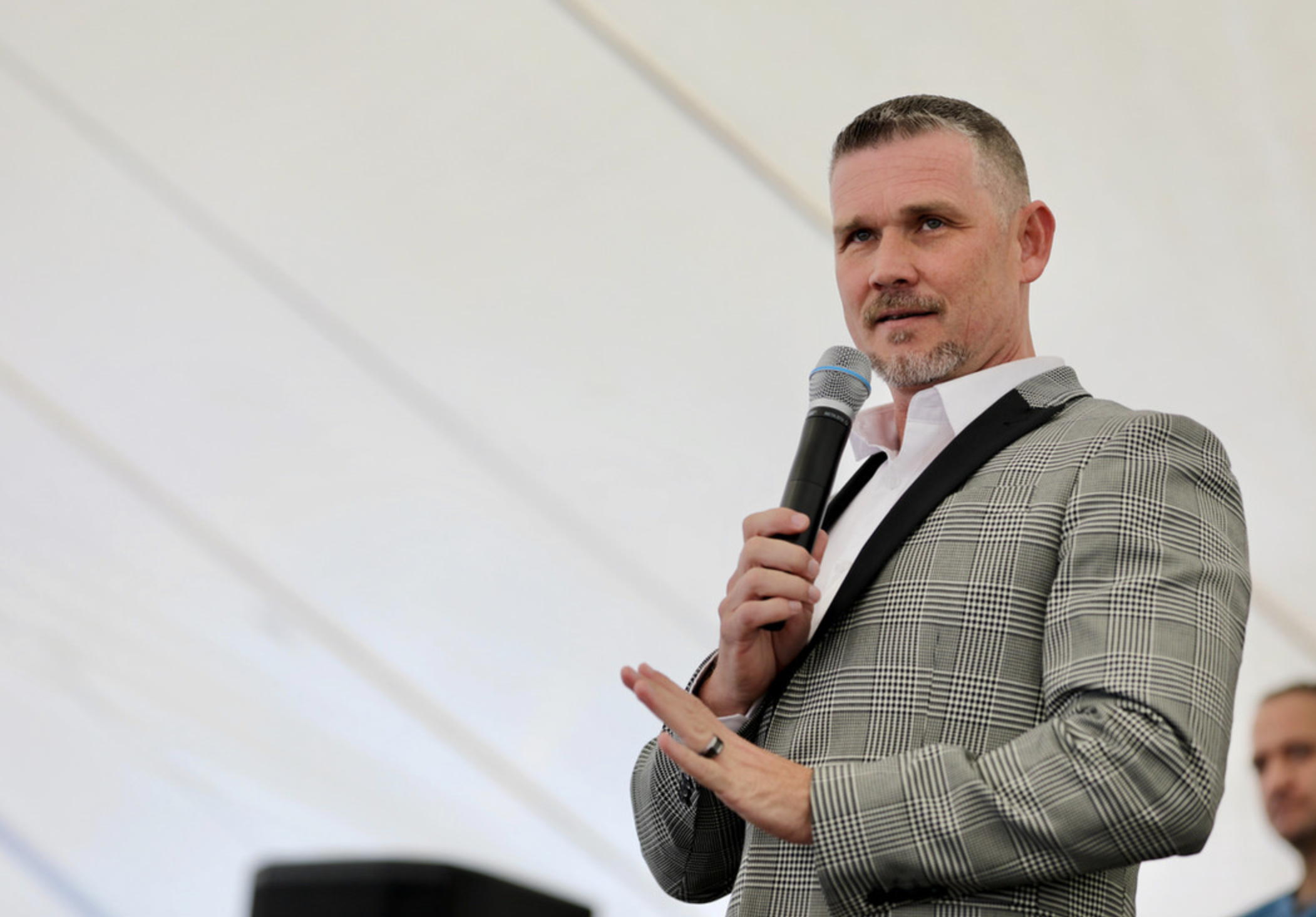 “Pastor” Greg Locke is the principal preacher at Global Vision Bible Church in Tennessee. He also refuses to accept that Joe Biden is president, is an anti-vax whack, and counters his own church’s mission statement by introducing politics into literally everything, even a good old fashioned tent revival.

“What God’s looking for are people under this tent, people online that he wants to put in charge of some stuff,” Locke preached. “There is no reason the church of the living God and the kingdom of Jesus Christ should not rule this nation.”

Spinning up his energy and the level of his voice, he justified himself by claiming, “The Bible says that the Kingdom of God suffereth violence.”

“And those that truly follow Jesus Christ take it by force!” he shouted with a fist in the air.

Except, that’s not what Matthew 11:12 — the verse he was quoting — says. Here’s what it says: “From the days of John the Baptist until now, the kingdom of heaven has been subjected to violence, and violent people have been raiding it.”

The “kingdom of heaven” is a term used throughout the New Testament, but it never, ever refers to the United States of America. And it certainly isn’t a call to violence, but instead a lament against it.

This is how these fundamentalist dominionist preachers lie to their congregations. It’s evil, and it begs for taxation of churches. 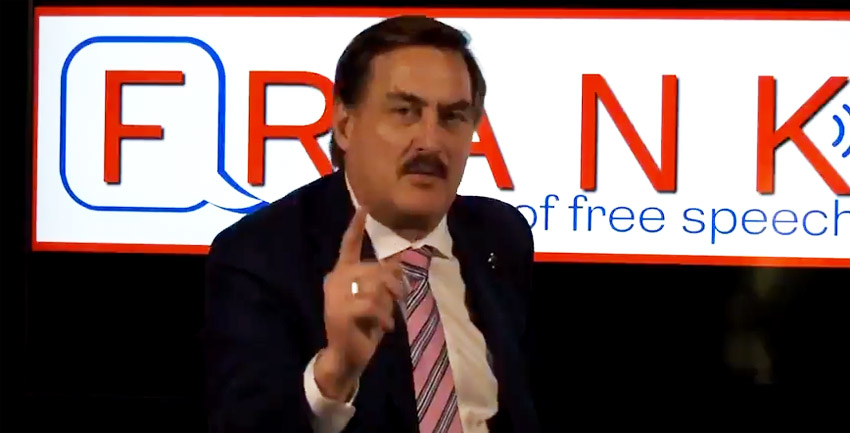 In a frivolous move, My Pillow CEO Mike Lindell is suing Dominion Voting Systems for 1.6 billion dollars in damages to “protect his First Amendment rights.”

In the complaint, the privately held company says that it is suing to protect free speech and to remedy harms that MyPillow says it has suffered.

“This lawsuit is brought in support of the marketplace of ideas and to remedy the grave harm that has been suffered by MyPillow as a result of Dominion’s suppression of speech and attacks on the Company,” the suit states.

Dominion Voting Systems, along with Smartmatic, are suing Rudy Giuliani, Sidney Powell, Fox News and several Fox hosts, and Lindell, for their outrageous lies about the 2020 election.

Like most of these evangelical right-wing blowhards, (Sarah Palin ushered in this talking point) they have no idea what the First Amendment is and does. A private company can sue a person for defamation, but it’s only the government who can’t censor your right to free speech. 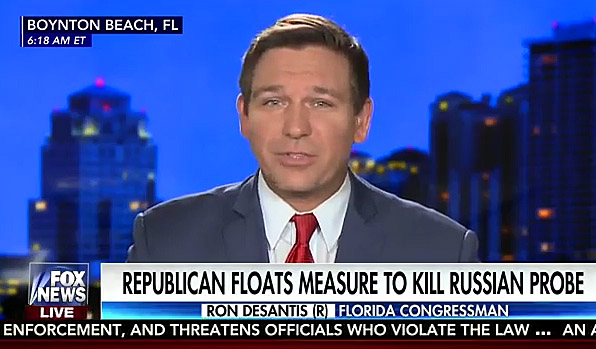 Ron DeSantis, the mini-Trump, has signed into law a highly controversial bill that grants civil immunity to people driving over protesters who are blocking the road.

In the HB1 bill, Florida it defines a riot as a public disturbance involving three more people who, in their opinion, are committing disorderly conduct.

Obviously, this is a Republican-only bill as it curtails the right of Americans to protest.

Florida Agriculture Commissioner Nikki Fried, who has been critical of the law, said the bill was fast-tracked and bypassed the accountability of numerous Senate committees.

END_OF_DOCUMENT_TOKEN_TO_BE_REPLACED 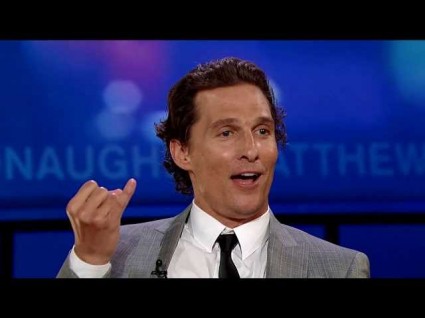 It’s a long ways away, but these kind of numbers should give Texas Republicans pause. Greg Abbott’s general bungling and indifference to Texans dying from Covid, the power grid failure, snowstorms, etc has created an opening for someone like the actor, Matthew McConaughey, should he decide to throw his hat in the ring. It won’t be easy, of course. Republicans have the election machinery in place to bump the numbers up substantially, but a popular Democrat versus an unpopular incumbent can make for a winnable race, especially with solid organization and grassroots support.

One to keep an eye on anyway. McConaughey has expressed interest but who knows if he’ll actually run. Seems like a serious paycut.

Matthew McConaughey commands more support to be Texas’ next governor than incumbent Greg Abbott, according to a poll released Sunday by The Dallas Morning News and the University of Texas at Tyler.

However, the film actor and political newcomer could hit potholes in either major party’s primary if he enters next year’s governor’s race, the poll found.

For months, McConaughey has teased political pundits and TV talk show hosts with musings that he might enter politics in his home state.