There are two articles on the website of The Spectator today concerned with last night’s breaking story about Alex Salmond and Nicola Sturgeon. One of them readers of this site have seen already, because the Spectator has literally just cut and pasted it from Wings (without attribution).

It’s the text of Salmond’s submission to the Hamilton inquiry, and we know they just copied it from us (rather than having been leaked it independently) because of this paragraph:

As we told readers last night, that redaction was made by us – not by Salmond – as an extra precaution to prevent the possibility of one of the complainers in the criminal trial from being identified. It did not appear in Salmond’s actual submission, and so Wings is the only possible source for it being in The Spectator.

Stealing our story lock, stock and barrel without credit is rather poor form from the magazine, but it’s the other piece we’re more concerned about. 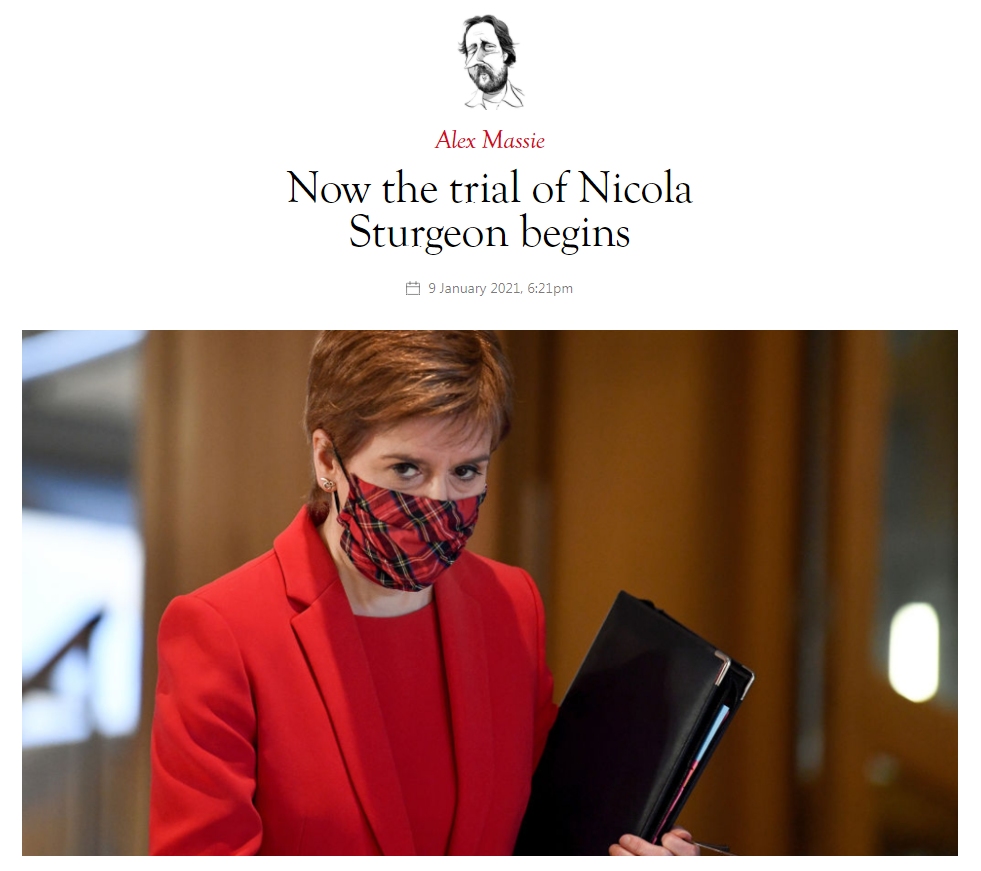 It’s a very long article – over 3700 words – and it sets out to very broadly tell the whole story from its very beginnings up until last night. Much of it is factual and unobjectionable. But Massie, who has made no secret for many years of his distaste for Salmond, just can’t help bending and twisting the truth to try to turn it into a grubby smear piece.

The first 14 paragraphs are played straight, but then Massie starts to stretch the truth into shapes he finds more pleasing.

The line about “the breadth, depth and seriousness of the charges” is simply a nonsense. Of the 14, there are just two serious charges – one of attempted rape and one of assault with intent to rape.

The other dozen are laughably trivial claims (a single alleged pat on the bum, a single alleged ping of a lock of hair) quite transparently filed only in an effort to corroborate the serious ones via the so-called “Moorov Doctrine” – a unique Scottish legal principle whereby minor incidents are used to try to prove that a suspect is “the sort of person” who would be likely to commit other crimes for which there is little or no other evidence.

(This is because of Scots law’s requirement for corroboration, ie supporting evidence. It’s particularly relevant in cases of alleged sexual assault because such crimes generally tend not to be witnessed by anyone other than the suspect and the victim, so they’re harder to prove than other crimes. Moorov basically says “if this person is the sort of person who’d touch someone’s bum in public, they’re probably a rapist too”.)

The next paragraph is questionable too.

Really? While we’ve spoken to Alex Salmond on a number of occasions and met him personally twice, this site would not count itself by any means part of his “immediate circle”, but we know a very large number of people, ourselves included, who were not at all surprised by the innocent verdicts.

(Other than in the sense of perhaps being surprised that a conspiracy against Salmond on such a massive scale would not have ensured it controlled the verdict too.)

Even without any insider knowledge, the number of Moorov charges was a clear indication that the prosecution didn’t feel it had a very compelling case to present on the serious ones, as proved to be the case. And quiet inquiries we made among political figures who’d known Salmond a long time without necessarily being counted among his friends uniformly returned the view that this was a man who whatever his flaws was certainly no would-be rapist.

Still, we’re sure Alex Massie mixes in very different circles to us in every possible way, and is, let’s say, likely to know more people willing to take a low opinion of Alex Salmond, so we’ll let that one go.

It would, however, certainly explain the next paragraph.

Is it? “Trashed”? By acquittal on all charges? We would submit that that rather depends on your perspective. People already holding a low opinion would certainly be likely to come away from the trial inclined to believe the prosecution’s claims, even after they were rejected by the jury.

To others, though – including whatever small number of Scots might not have had preconceptions of Salmond’s character one way or the other – an innocent man has been vindicated after the fullest possible scrutiny and walks free without a stain on his character.

So let’s put that one, too, down to differing perspectives. The next paragraph, however, is nothing more than an objectively disgraceful lie.

At the trial, Salmond admitted that only ONE of the charges had any sort of basis in truth – the claim of Woman F. It was agreed that Salmond and the woman had both had a little too much to drink while working late one night and engaged in a fully clothed and entirely consensual interaction described as a “cuddle”, but still one which shouldn’t really have been allowed to happen in the name of governmental propriety.

As the senior person present and therefore with more responsibility to have prevented it, Salmond subsequently apologised and the woman accepted the apology. Offered the chance to move to an alternative job of the same status and salary, she declined and continued to work with Salmond. She repeatedly made clear to the initial Scottish Government investigation that she did NOT want the police to become involved over the incident.

In every other case, Salmond’s defence was that the alleged incidents simply hadn’t happened at all. Most of the claims – such as those involving Women A, D, G, J and K –  had supposedly happened in public places with numerous other people present, and yet no witnesses were produced who had seen anything untoward in any of them. The prosecution also dropped the charge involving Woman E before the trial began.

In the case of Woman H, the alleged attempted rape, a witness who knew Woman H well and was her friend asserted that Woman H wasn’t even in the building on the night she claimed Salmond had attempted to rape her.

In the case of Woman C, the only witness – the driver of a ministerial car – said it would have been physically impossible, due to the layout of the car, for Salmond to have committed the alleged offence without his having seen it.

The above accounts for every charge except that involving Woman B, which Salmond also categorically denied. And in every case the jury believed Salmond’s accounts, not those of his accusers.

So contrary to Massie’s claim, the case of Woman F was the only one in which it was admitted that anything even slightly improper had happened at all. There were no “multiple counts” of Salmond “admitting the essential details” but denying criminality.

The closest thing was his accepting having once lightly touched the cheek of Woman D to wake her up when she’d fallen asleep in a car on a foreign trip, and to occasionally “pinging” her very curly hair, as many of her other work colleagues did and to which she’d never indicated any sort of objection.

If that, as Massie then claims, is enough to make someone a “creep” then we fear there isn’t an adult man alive in the UK who could dodge such a label. Goodness knows what sort of term would be appropriate for the country’s Prime Minister, who refuses to even reveal how many children he has from an untold number of wives, girlfriends and mistresses.

(One of the dodgiest aspects of the case, referenced by Massie above, was the covert recording of Salmond’s QC on a train by an unknown person. The muffled, edited audio, in which viewers were not allowed to hear the beginnings or contexts of sentences, was grotesquely misrepresented as Jackson offering his own personal opinions when he was clearly in fact speculating as to the views that might theoretically be held by an observer of the case.)

From this point the piece descends into full-on malicious innuendo.

The paragraph above discusses things which exist only in Alex Massie’s imagination. Of what “poor behaviour” are we talking here, exactly?

Alex Salmond, let us remember, has been found guilty of NO crime whatsoever, and been acquitted of even extremely minor alleged misdemeanours, despite the police having conducted a massive trawl over many months, interviewing literally hundreds of women who had made no complaints about him at all, going back for many years desperately trying to find something, anything they could bring to court to prop up their hopelessly weak case.

So what actually was there for people in the SNP to have an “inkling” about? What are these unspecified “whispers” which Massie alleges unnamed people to have “heard”, and even if they existed what possible reason was there to believe any of them rather than dismissing them as the sort of spiteful invented scuttlebutt that abounds in the sewer that is politics?

Over and over again Massie repeats these phantom claims, asserting without even a hint of evidence or detail that Salmond’s reputation was in some way tarnished.

And then he decides to turn up the heat.

Yet this supposed incident is not sufficiently “famous” for any details of it to have leaked into the public sphere in 12 years, was not sufficiently “horrific” to have resulted in any sort of action at the time, and was too feeble an allegation even to make it into a case in which a man stood to lose his liberty over supposedly touching someone’s leg for five seconds in the back of a car.

Massie nevertheless presents as an uncontested fact that Salmond “behave[d] appallingly” in the alleged incident. The only story we’ve heard in relation to the airport was of Salmond making a joke about a staff member wearing “killer heels” when a security scanner had gone off as they walked through it. If Massie knows of anything worse, he doesn’t choose to share it with his readers.

It would be easy to give a very broad outline while emphasising for legal reasons that no charges had been brought and that there was no reason to believe the allegation was true. But instead he just dangles the salacious word “horrific” from an unnamed source and invites the readers to imagine the worst for themselves, while also implying that it’s definitely true and indicative of “appalling” behaviour. It’s a repulsive piece of cheap, nasty cowardice.

Once again: Massie’s constant insistence that Salmond had some sort of track record of inappropriate conduct before the trial, about which the SNP should have known, is presented entirely without any sort of basis in fact.

Not a single actual incident is cited. We’re told only of unspecified “whispers” from unidentified mouths about unnamed acts on unspecified dates. To call it “fabrication” would be to hugely over-dignify it by suggesting that there was anything in it from which one could weave fabric.

These are simply the worst kind of baseless, spurious gutter smears against a man who was scrutinised relentlessly and forensically for decades by a Scottish media desperate to find any kind of dirt on him, and yet who always came up blank.

It is a shameful thing for any media outlet to have published. On reflection we’re glad that The Spectator didn’t credit us for the story it stole, because we would have felt unclean simply to see our name on its pages.