A reader alerted us to this. (You can skip the first minute.)

It’s a book currently being given to P1 children in Scotland, via the Scottish Book Trust. (We’re sure that by Christmas it’ll be getting read to them in class by drag queens.) And it’s something that people should probably be concerned about.

(If you’re not watching the video, click all the pics to enlarge and read the text.) 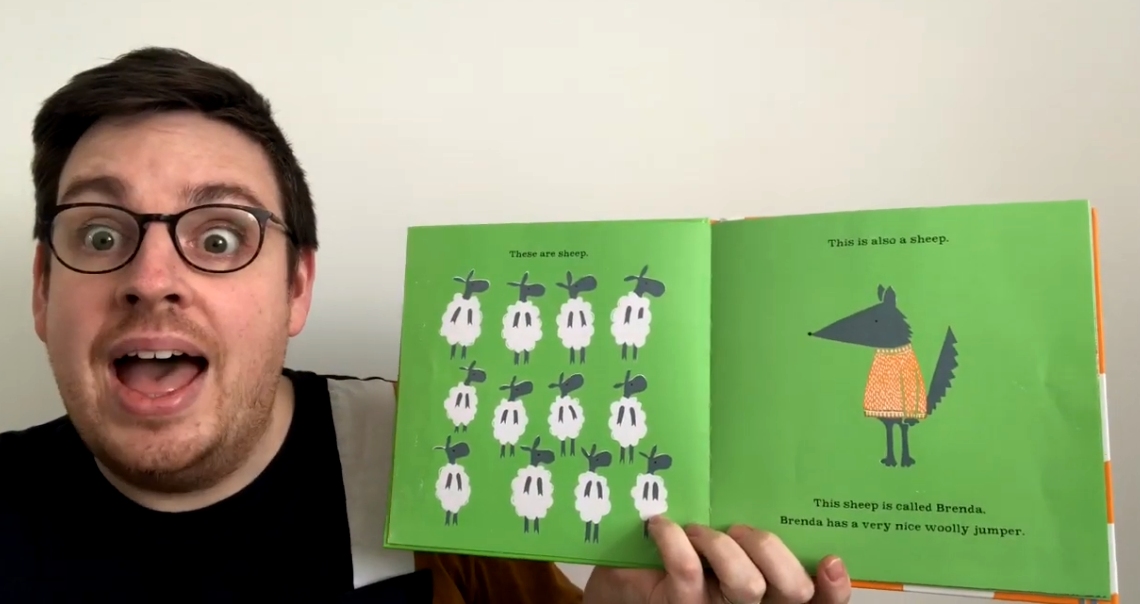 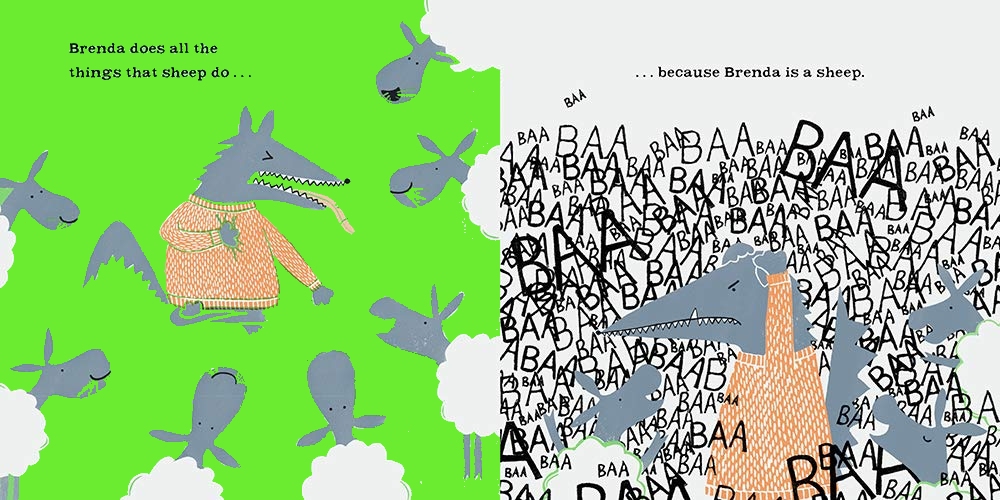 You can already see where this is going, can’t you?

According to the back cover blurb, the book is “a very funny story of mistaken identity and acceptance”. It’s also described as a “hilarious story of a wolf in sheep’s clothing with a surprise twist”. For most of its length it runs like a variant on the traditional tale of Little Red Riding Hood, with a big bad wolf disguising itself in order to eat its prey. 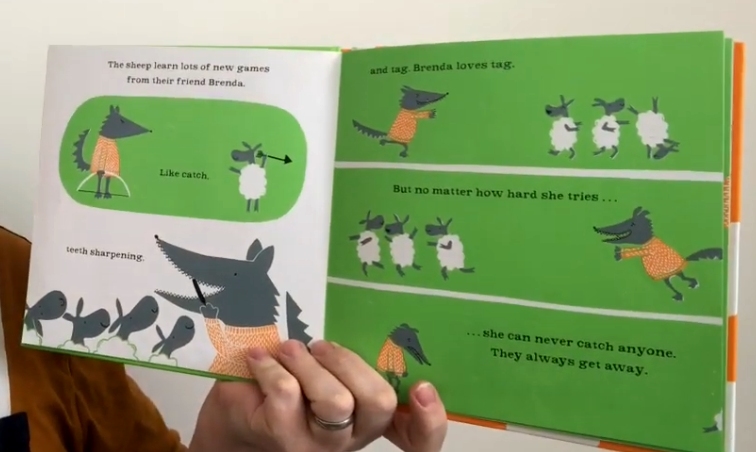 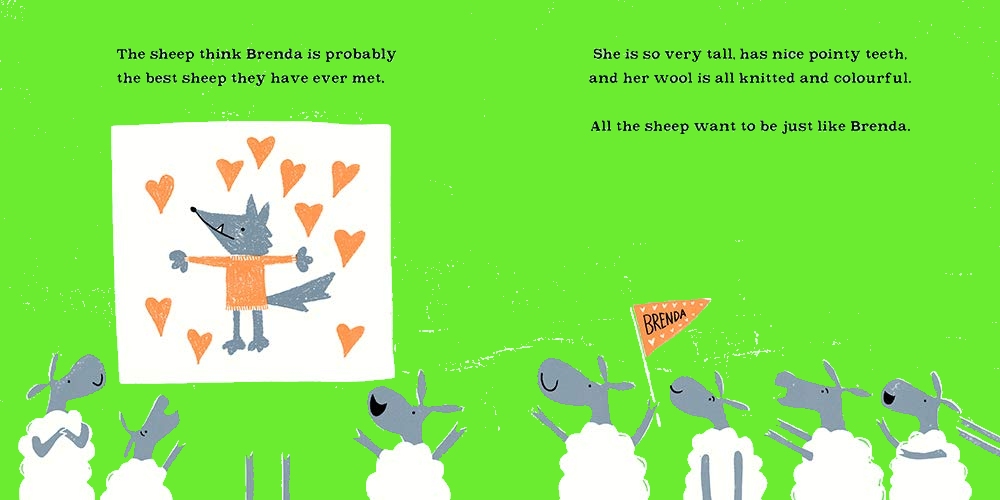 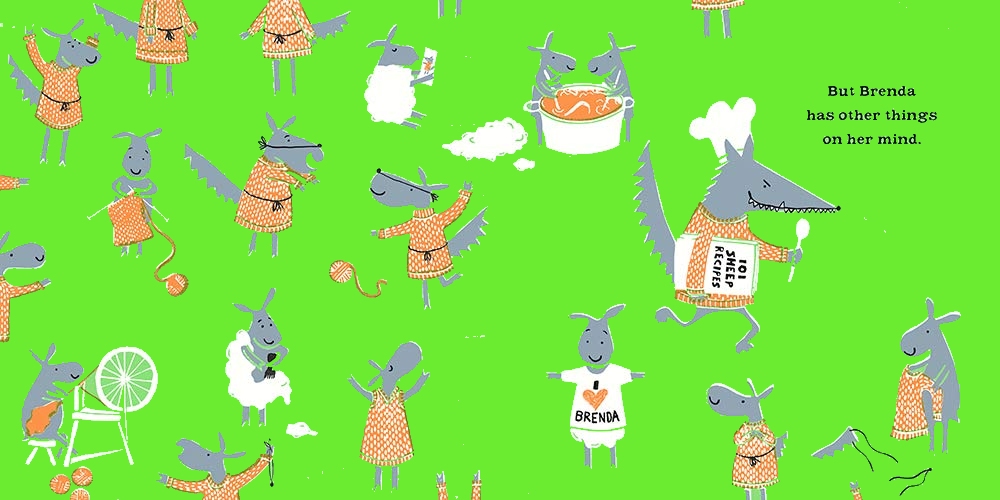 In other words, like a standard sort of cautionary fable for young kids – “Beware, there are predators out to harm you”, depicted in a gentle, not-too-frightening way. Because, y’know, there ARE predators, and teaching children basic safeguarding is one of the most essential acts of parenting. 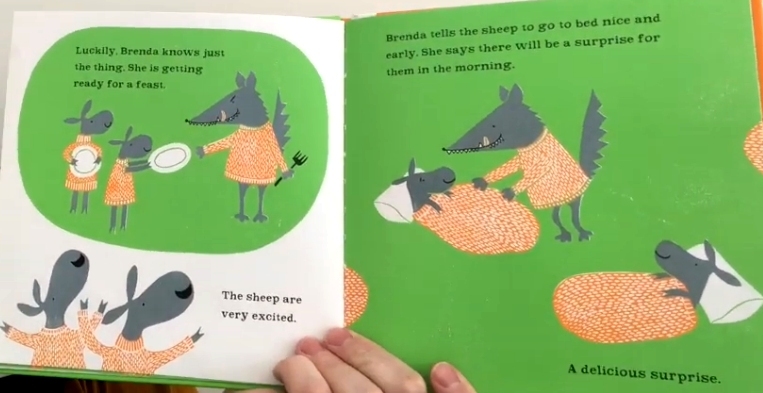 So let’s just skip ahead to the end. Because when Brenda wakes up from dreaming about mouth-watering roast lamb in mint sauce, there’s an unexpected development! 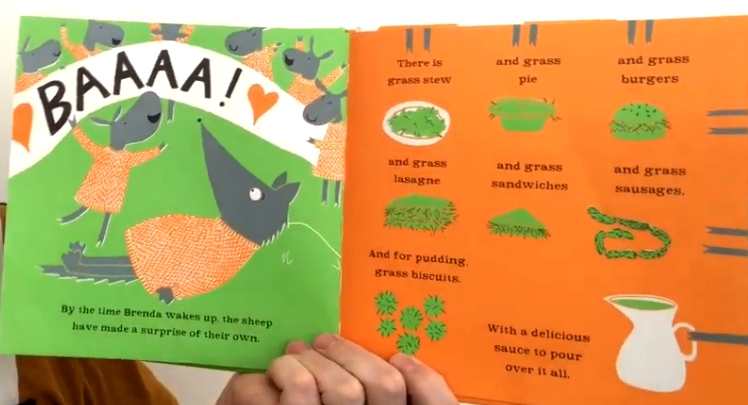 Presented with a banquet of delicious grass in mint sauce, Brenda decides not to eat the sheep after all. After all, they’ve been so kind! But it’s not just that – apparently overnight, Brenda has literally become a sheep. Or rather, in fact, we’re informed that Brenda has always been a sheep all along.

We hope we don’t have to spell out how astonishingly irresponsible and sinister this book is. It is itself ironically a wolf in sheep’s clothing, a charming and sweet delivery mechanism for the stupendously dangerous message that people who appear to be predators – and who indeed ARE predators with clearly-stated predatory intent – won’t harm you as long as you’re kind to them. Or put another way, just play along with the lie and you won’t get hurt, kids. 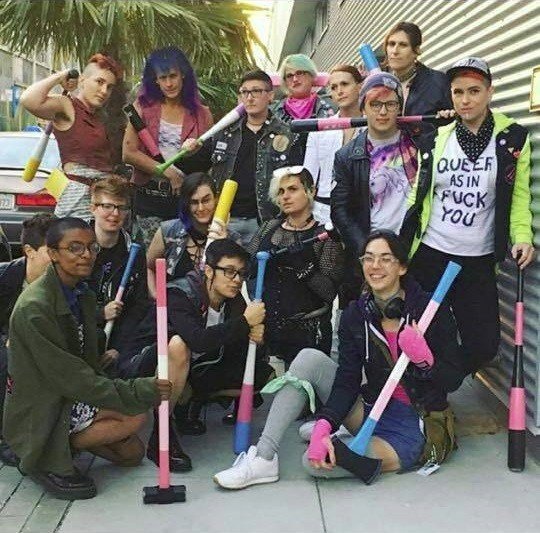 (There’s also, incidentally, a familiar subtext, namely that wolves are simply better at being sheep than boring old “cis” sheep are – “the sheep think Brenda is probably the best sheep they have ever met… all the sheep want to be just like Brenda”.)

But Brenda isn’t a sheep, readers. Brenda is a wolf. You know it and we know it and Brenda knows it. Leopards can’t change their spots, wolves can’t change their species and neither of them can live on grass, whether it comes with mint sauce or not. Wolves are carnivores. If you offer a hungry one a grass pie and a cuddle it’s still going to eat you, no matter how moving it finds the gesture.

This isn’t a book about “mistaken identity”. It’s a book about the vulnerable identifying a danger entirely correctly, but being gaslit into believing it’s a mistake and rejecting all their natural protective instincts, brainwashed into accepting and welcoming predators into their midst. Sound like anything we know?

(Horrifyingly, the man reading the story is a “Safeguarding Lead” at a primary school.)

We tried to convince ourselves – as we think some reviewers may have done – that the book was actually a very clever warning about the plausibility of predators, but that level of subtlety would be asking an awful lot of five-year-olds. If Brenda had winked to camera in the last frame we’d just about buy it, but that doesn’t happen.

As it is, the book ends, but nobody’s living happily ever after. Later that evening, or the next day or the day after, Brenda’s carnivorous wolf stomach is going to be grumbling and churning, because grass just won’t quell Brenda’s craving, and someone’s going to have a grisly job picking up the bloody wreckage of what happens next.

Don’t say you weren’t warned. Don’t say nobody told you.

Serious violent and sexual male criminals who claim to be women

The War On Women

Two collections of violent threats from TRAs to women