Voting is now open in the selection contests to determine who the SNP’s candidates at next year’s election will be. Given the extremely dodgy secret-Survey-Monkey-ballot shenanigans recently adopted by the party NEC, we’re uncomfortably reminded of a famous quote attributed to Joseph Stalin: “it’s not the people who vote that count, it’s the people who count the votes”.

An excellent blog by the former SNP Trade & Industry spokesman Iain Lawson today highlights the near-impossibility of effecting change from within the SNP now, due to changes made by the leadership to eliminate the influence of ordinary members.

Indeed, so secure do the party’s controlling faction consider themselves that they now feel able to openly call their own supporters “bitches”. 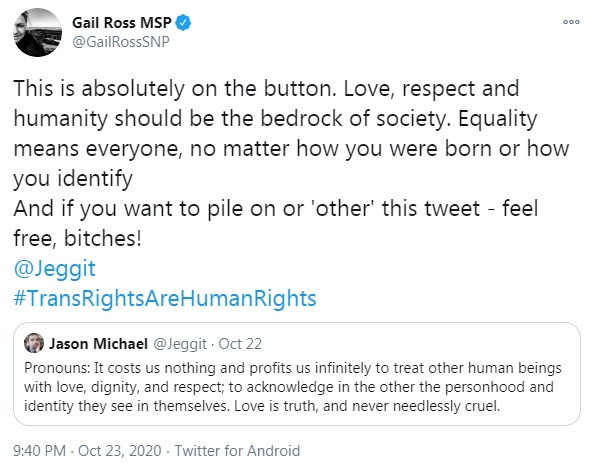 But not quite SO secure that they still don’t want to cheat.

A startling number of people sent us this yesterday: 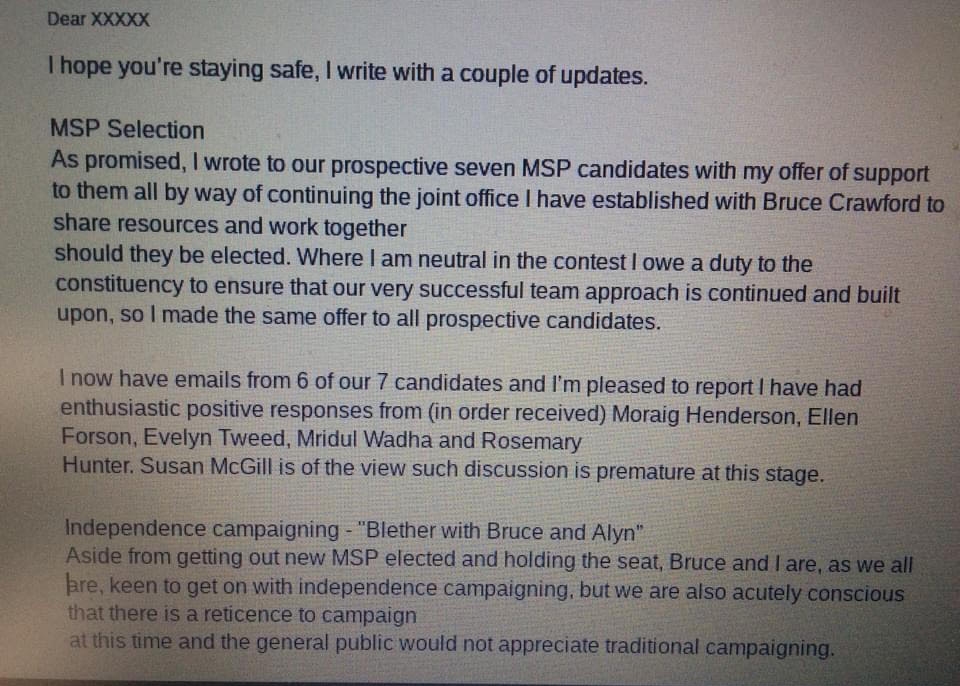 It’s an email sent by Stirling MP Alyn Smith to all branch members using the party’s internal mailing system. While phrased innocuously it’s a direct attempt, against SNP rules, to cynically influence the outcome of the Stirling selection by presenting a very thinly-veiled preference list of candidates to the electorate.

(SNP elections are conducted by Single Transferable Vote, so voters can rank every candidate in order of preference.)

Smith’s “offer” of a shared MP/MSP office is intended to put pressure on gender-critical feminist candidates – primarily the only one excluded from his list, Sameeha Rehman, a young woman who’s had the endorsement of the SNP Women’s Pledge group.

(Whose convener was this week, as alert readers will recall, blocked by the NEC from seeking the Dumbarton seat despite being the deputy leader of the SNP council group in the constituency. The person mentioned last by Smith, Susan McGill, is along with Rehman the only other Stirling candidate who signed the Women’s Pledge, which is an extremely innocuous list of statements nobody could reasonably object to.) 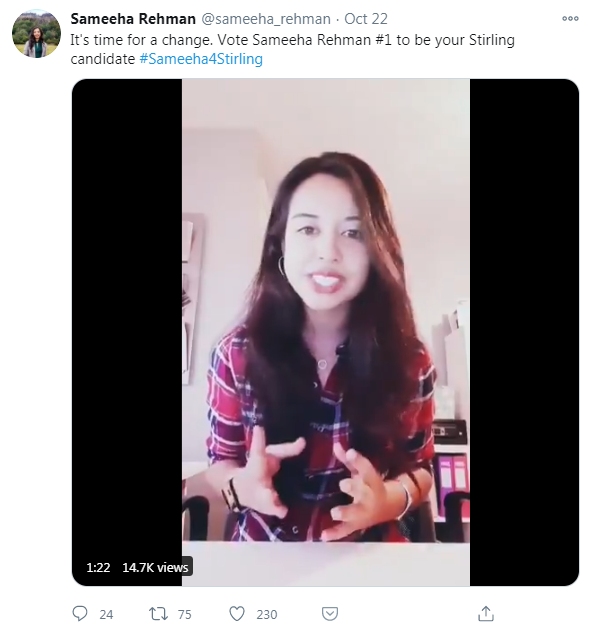 How so? Because “Daddy Bear” staffs his office almost entirely with the aggressive and misogynist young men of the party’s hardline transactivist wing, so he knows it would be a deeply hostile and unwelcoming environment for someone like Rehman. Dressed up as a money-saving convenience, Smith’s “offer” is in fact an underhanded and sneaky attempt to intimidate Rehman and to morally blackmail anyone thinking of supporting her, via the same financial figleaf as was used to block Joanna Cherry.

People could of course try filing complaints about such behaviour, but we already know that the Executive has selectively deaf ears and simply ignores any letters about things it doesn’t want to deal with, even if they’re from senior elected representatives.

By way of example, we’ve recently come into possession of an exchange – if it can properly be called that – between East Lothian MP and former justice secretary Kenny MacAskill and the party’s business convener Kirsten Oswald.

I am writing regarding the above What’s App message that was sent to me anonymously and which I have forwarded to the Parliamentary Clerks in the Holyrood Inquiry. I have also sent it as a courtesy to Alex Salmond and the Crown. The document is I believe accurate and that raises huge concerns.

Both the Justice Secretary and the Westminster Spokesperson on Justice have been talking about the rule of law. I have copied both in as this message raises concerns over the actions of the Chief Executive and the Chief Operating Officer of the SNP.

Peter Murrell is both the CEO of the Party of Government and the spouse of the First Minister. For him to be even seeking to put pressure on or interfere in a police enquiry is simply unacceptable. I therefore look forward to hearing from you as a matter of urgency on action you are taking to protect the integrity of our party.

Yours for Scotland
Kenny MacAskill”

I’m writing regarding the above. I note that the Party are now paying for Shepherd and Wedderburn to provide advice to the Party CEO. I also understand that similar arrangements have been made for the Party COO with another firm.

My understanding of the position of both the Party and the Scottish Government with regard to not just the Holyrood Inquiry but more widely is to be as open as possible and provide as much information as can be released.

I now have an interview with police. They are acting on the instructions of the Crown for my having made available to the committee and the public an item I received anonymously but which is highly relevant to the inquiry. Given recent actions of the latter organisation therefore notwithstanding my huge admiration for the former, I will be taking and acting under legal guidance.

I’m sure you’d accept that it would be perverse for the Party to be funding officers who are apparently seeking to restrict the availability of information and not support an elected member seeking to make information available in support of it. Can you therefore confirm that you’ll meet my lawyers’ fees as is being done with Peter Murrell and Sue Ruddick?

I’ve copied in the Group Convener and Westminster Leader as I along with every other member pays a party levy and it seems appropriate that Group members be accorded the same rights as staff, especially when policy is being adhered to by one and not by the other.

Finally, I know you have simply refused to reply to previous correspondence which I find discourteous. But again, for the Leader and Convener if that is to be your way then I reserve the right to go public on this. These issues are causing concern within the wider party and they are entitled to know what is going on.

Hence, I look forward to hearing from you as a matter of urgency.

Yours for Scotland
Kenny MacAskill “

Many thanks for your email. I am just seeing this now, so I will come back to you.

I look forward to hearing further from you.

On another issue though relating to party expenditure that I and others fund, can I raise the following?

1 On what date and in what capacity did Cllr Jessica Mennie first come onto the Party HQ payroll?
2 Was the current post she holds advertised internally or externally and if so, can I receive details?
3 Who appointed her and when was it approved by NEC?

Mennie, incidentally, is an Aberdeen councillor and the sister of SNP transactivist Josh Mennie, convener of the hyper-intolerant “Out For Indy” grouping, a man who proudly proclaims his fondness for using women’s toilets regardless of women’s objections.

She was office manager to Mark McDonald, and is thought to have been instrumental in the undermining of his position on deeply suspect allegations of sexual harassment based on a joke about an autocorrect error in a single text message. She now works for party HQ in a new job which was not advertised and for which nobody else was interviewed, widely believed to be her reward for her part in his destruction.

MacAskill has received no further replies from Kirsten Oswald regarding the issues raised in the letters above, despite also CCing in his Westminster group convener and leader, Deidre Brock and Ian Blackford – just as he hasn’t done over his inquiries concerning the SNP’s accounts. The party executive’s approach to anything awkward is to simply stick its fingers in its ears, close its eyes and hope it somehow goes away.

(The Electoral Commission, incidentally, this week assured this site once again that it intends to publish the accounts next month. It has, however, already promised it would do so in August, September – twice – and October, and missed all those deadlines.)

The current candidate selection will be a test of that “hear no evil” policy, though it’s far from the only test the leadership faces in the near future. Supporters of the Women’s Pledge group have issued a list of candidates backed by their members, whether as full endorsements or “least worst” options: 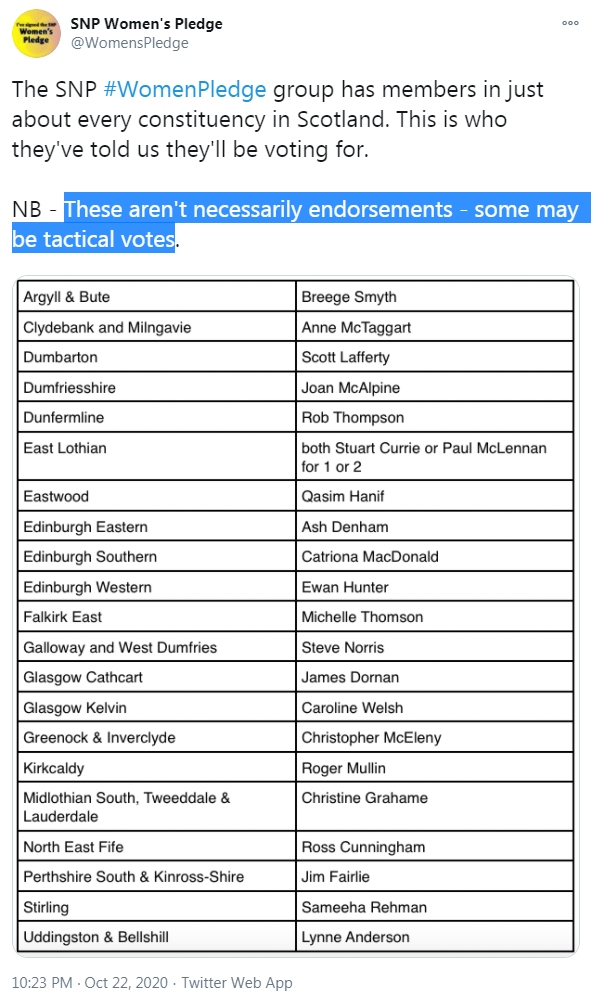 As well as deliberately misrepresenting the list as “official endorsements” when the WP group had specifically said that they weren’t, Beaton’s complaint about it comprising mostly men is deeply disingenuous. 10 of the 21 recommendations on the list – 48% – are women, which is a notably higher proportion than the number of current women at either Holyrood (35%) or Westminster (34%).

(And it’d be almost 55% – 12 out of 22 – if the NEC hadn’t blocked people like Caroline McAllister and Joanna Cherry from contesting nominations. The objection is of course doubly ironic as the woke faction enthusiastically backs the unlawful presence of men on all-women shortlists.)

For now, all members can do is vote in good faith and see what happens. The outcome will tell us a lot about whether the SNP is a party of Scottish independence any more. Those of us not who are not members and have no vote can only cross our fingers.