The Electoral Commission appears to have missed yet another deadline for publishing the SNP’s 2019 accounts (we’re waiting on them to return our phone call), so we’ve got a moment to talk about something else relating to the party’s finances.

[EDIT 12.56pm: the Commission now “hopes” to have the accounts published “in the next three weeks” along with those of the other main Westminster parties.]

The Scottish press covered itself in as much disgrace over the publication of the will of lottery winner Colin Weir after his tragic death last year as it had done during his life. Pretty much every paper in the country ran lurid headlines about how he’d “blown” or “burned” (translation: spent) half of his £80m share of the 2011 jackpot in nine years. 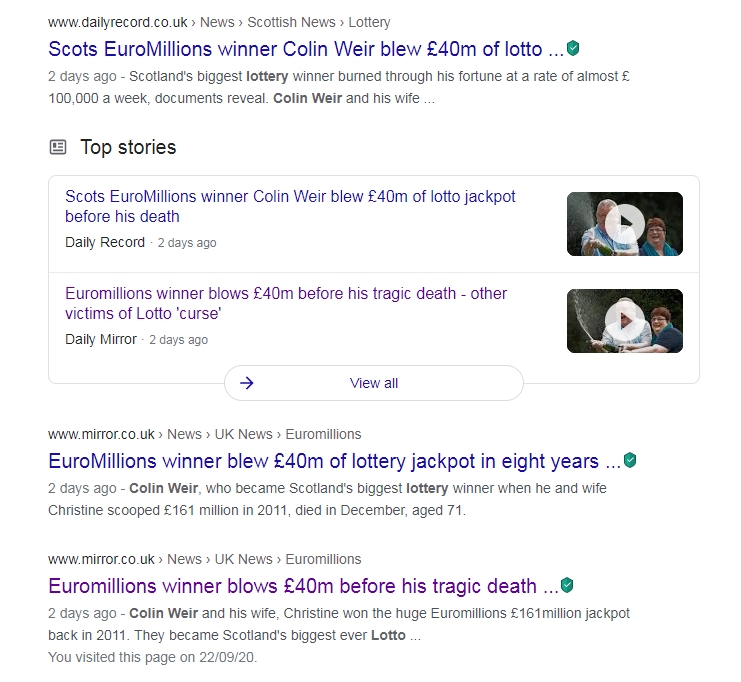 Weirdly, the Scottish Sun and the Daily Mail stood out for (mainly) respectful coverage focused on the fact that Colin Weir had in fact used most of the money on good causes and generous support for friends, family and strangers.

(Also, both of the Weirs were fairly old and already in quite poor health when they won the money, so why wouldn’t they spend it? You famously can’t take it with you.)

But the Mail was almost unique in the fact that its headline mentioned something that seemed to stand out as the most obviously newsworthy aspect of the will. 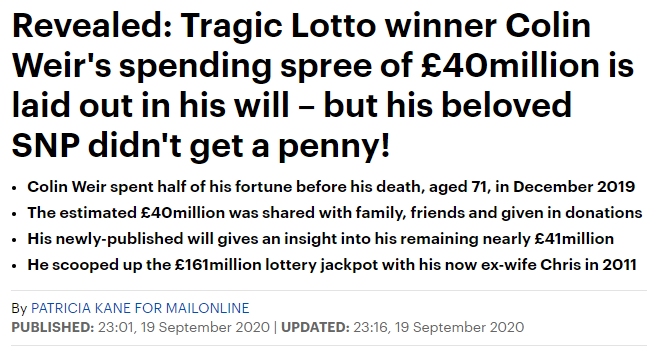 For many years after their win, Colin Weir and his then-wife Chris had been the biggest bankrollers of the SNP in the party’s history, donating over £4.5m to the party as well as £1m to the Yes campaign.

But even though Colin died with £41m in the bank, and had made extensive advance preparations for his death, including a spectacular £1m lobsters-and-champagne wake for his pals in Largs, he didn’t leave a single penny to the SNP. 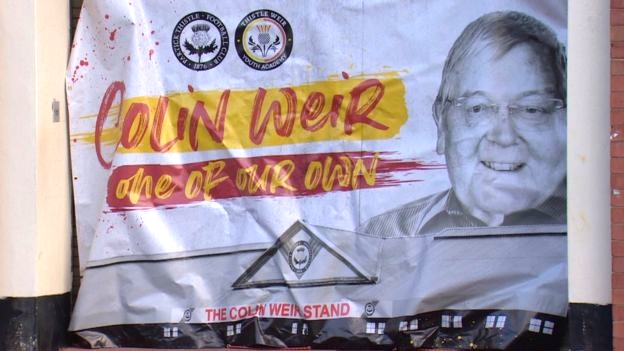 Wings had of course told its readers about the rumoured rift between the Weirs and the party, and the reasons for it, many months ago:

But it’s still quite startling that someone who’d been a lifelong member, activist and even candidate, and who had such a demonstrably generous spirit, had become so far estranged that even on his deathbed there was no gesture of reconciliation.

And what’s even more startling is that the Scottish press, who’ve treated both the SNP and the Weirs with such utter contempt for almost a decade, didn’t make a big deal out of it. Colin Weir died almost nine months ago now, so enough time has passed that it wouldn’t even have been ghoulish or tasteless – the post-mortem snub is a legitimately noteworthy news event in its own right.

Yet other than the odd half-hearted attack for the sake of appearances, the Scottish media has for months now noticeably formed a protective circle around the leadership of Nicola Sturgeon. It’s absolutely clear that given the atrocious state of the opposition parties, which shows no sign of changing any time soon, the Unionist establishment considers a Sturgeon government the least-bad of the achievable options.

And perhaps the SNP don’t need Colin Weir’s money. Perhaps when the months-late accounts ARE finally published, whenever that might be, they’ll show a party in rude financial health, ready to fight a referendum campaign at a moment’s notice with all the “ring-fenced” money it raised in 2017-19.

Perhaps that’s why the story has barely registered – because the SNP has so much cash that it simply doesn’t need bequests from the richest independence supporters in the country. We’re sure we’ll find out at some point.