For a former captain of Team Australia, Tony Abbott certainly seems to have divided loyalties these days. 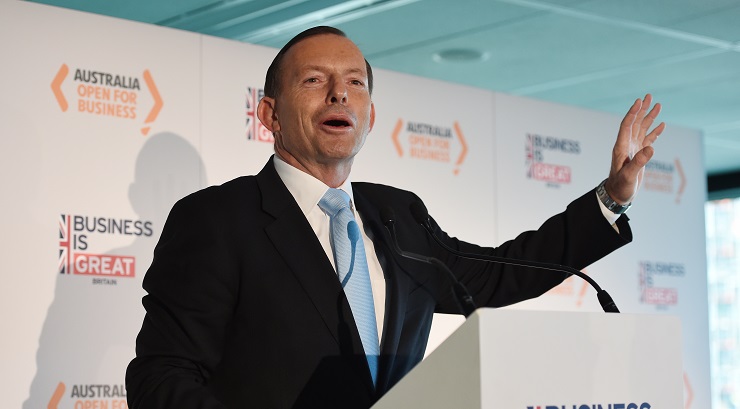 Well it didn’t take long for Anthony St John Aloysius Crouchback Savonarola Prebendary Abbott to started playing to the gallery in the UK. Speaking to the Policy Exchange about the “dictatorship” of Dan Andrews, loyally backing up Boris’ plan to get everyone back to school and the office, and — in the weeks before taking his new role as a UK trade adviser — trashing Australia’s relations with China. Thanks, Tone!

While everyone in Australia is waiting with glee to see the UK public slowly understand the strange, strange man who is Tone, the serious question has to be: who does Tony Abbott now represent, and where do his loyalties lie?

This is a former prime minister of Australia who is now advising a foreign power on a matter with which Australia and that foreign power would be in competition. How can that be an act of loyalty to the country which once elected him?

The silence over this is very interesting. Let’s say we had had a Chinese-Australian prime minister, who after a disastrous term in government that ended with them being booted out by their own party, went to Beijing to advise on trade. The outlets that are now praising this new move for “our Tone” would be screaming bloody murder.

They’d point out that whatever sort of good relations we want with other countries, interests are interests. They’d point out that anyone who’s been prime minister has been privy to intelligence information shared with very few other people, including — as the ASD director has recently reaffirmed — Australian citizens. We know from the K-Collaery case that such state powers are used to gain commercial advantage. They’d ask how someone can do their new job competently without drawing that information in.

The reason this has not been asked is firstly of course because it’s Tony Abbott, who is cossetted and protected by News Corp, and will get little scrutiny from a defanged Age/SMH now run by Liberal consigliere James Chessell and headed by Peter Costello.

News Corp is a multinational company with loyalty only to itself; it is not going to squawk about the appointment to a plum adviser position of a prime minister who it helped to elect with the most brazenly partisan media campaign in modern Australian history.

Futhermore, Abbott’s fan base is going to use as cover the idea that Tone will be in there for us, arguing our case in… ???

This presumes that Abbott sees himself as Australian before he sees himself as anything. But Abbott is a European culture warrior, who sees himself as more loyal to that deeper, older cultural heritage, and its English subsidiary, than he does to Australia. He killed him prime ministership over three words: Sir Prince Phillip. People hated it because they picked up that he regarded Australia as a subsidiary in the relationship.

Furthermore, the job Abbott is being bumped towards puts anyone, anglophile or otherwise, in a directly antagonist relationship with Australia. Not much in goods, but business and financial services are a growing Australian sector, as are IT goods.

With entities like Atlassian, Afterpay and Canva making it possible for global market entities to be run from Australia, we are starting to create a genuine sector, in competition with London-based outfits. Whose corner is Abbott going to be in, if such matters arise?

Secondly, there’s trading partners and trade deals. With a no-deal Brexit looming, UK PM Boris Johnson is desperate to get any free trade deals he can up and running as fast as possible. The Tories are tanking in the polls. They’re safe UK-wide until 2024. But there are Scottish parliament elections in 2021, and if the SNP gains a majority, there may not be a UK by 2025. As the UK crashes out of the EU, Boris needs to persuade the strongly-Remain voters of Scotland that they’re not going to take a hit.

A UK-Australia free trade deal, ready to go quick smart would help immensely. But would it greatly help Australia? Only if we start to lose other markets, such as China and the EU.

With China, that’s already happening. Our trade relations in non-mining matters are deteriorating daily, with products such as wine and barley being tarriffed out of Chinese markets.

It’s in this context that Abbott did a U-turn on China-Australia relations in early August, giving the absurd and spurious notion that China was somehow acceptable in 2014 when he signed a free trade deal with it, and had now become a dictatorship again. Absurd. What could possibly have changed his mind?

The UK doesn’t have great trade prospects with China. But it does need to get a post-Brexit trade deal with the EU going. Who else is trying for an EU-free trade deal? Why, Australia! So we are in direct competition for that with a country being advised by an ex-PM of ours who would have been privy to strategising around the preparations for such. Fantastic.

Who does all this serve? The tight cabal of rightwingers across the UK and Australia linked by News Corp, the Tory and Liberal parties and minor players such as the IPA, the Menzies Research Centre and, God help us, the Revolutionary Communist Party.

Whoever’s interests Tony Abbott is serving, it’s no longer ours. If it ever was.

Who do you think Abbott is representing? Let us know your thoughts by writing to [email protected]. Please include your full name to be considered for publication in Crikey’s Your Say section