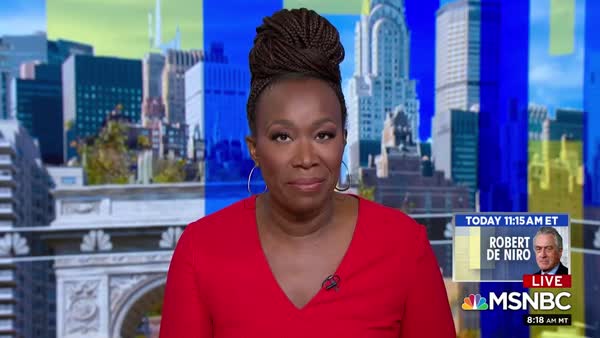 If you’ve been missing Joy Reid on the weekends, you’re not alone. She’s had a series of hosts filling in for her for the last few weeks, and while all did well, none were, well, JOY REID. The substitute hosts routinely promised she’d be back, and referred to her as confined to “Sick Bay,” and us Trekkies were tickled, though intrigued. Well, turns out Ms. Reid suffered not only from Whooping Cough, but from a blood clot in her brain. (!!!)

She, thankfully, is fully recovered, and promised she’s fine and feeling all better. She expressed deep gratitude for her friends who filled in at the show, her medical team, and the AM Joy fans who lifted her up and made her feel loved and missed. She also, though, took the opportunity to impart her up-close, newly-found wisdom about our country’s health care system, and insurance options in an explainer that is mandatory viewing for anyone confused about how it works here in the good ole U. S. of A.

REID: I did learn a few things by the way over the past few weeks, past couple of weeks, one of which is that our health care system is amazing. My doctors are fantastic. But it was also a reminder that our system is also really, really super dependent on insurance. And where and how we get our insurance in many ways determines what kind of care we can afford. For about half of Americans, 49 percent of us, where we get our insurance is through our jobs, or through a family member’s job. Your job decides your insurance plan, and either the insurer or your company itself decides what test and treatments they’re willing to pay for, and if there’s something the bean counters won’t approve, you pay for it yourself, or I guess, skip the treatment or the drug or the test, not a good idea.

And how you pay for that insurance is premiums. They come right out of your paycheck. You probably don’t even pay much attention to them. And your company pays a portion them you don’t even see, and until you actually need health care, you probably don’t think too much about that insurance. But the reason that your premiums and co-pays are pretty reasonable is that the pool of customers, the pools of customers who buy that insurance are really, really huge. 49 percent of Americans works out to 156 million people, as of 2017, according to the Kaiser Family Foundation. 156 million people who get their insurance through work. And they’re pooled in these big groups among the major insurance companies and each pool basically buys in bulk and gets decent prices for care.

For seven percent of Americans–about 20.5 million people–it’s the opposite story. They buy their own insurance as individuals or small companies. And so they pay both the premiums you see, and the employer ones that you don’t see. Think freelancers or people who own really small businesses. They don’t have a big group to negotiate for them, or an employer to share costs, so they see all costs themselves. Before Obamacare, they could be sold cheapo insurance that looks good until you show up to the doctors, and they’re like, “What am I supposed to do with this?” With Obamacare, they could qualify for a subsidy to help ease the burden.

The two other big pools of insured people are on Medicare and Medicaid. Fourteen percent of Americans, about 43 million seniors are covered by Medicare, the most popular form of insurance in America according to kaiser’s polling. 83 percent of Americans see Medicare favorably. About seven points higher than how private insurance polls. And 21 percent, or about 65 million people are covered by the other offshoot of the Social Security Act of 1965, Medicaid, which covers mostly lower income people.

Medicare is is not just popular. It’s really efficient. Instead of a bunch of risk pools based on employers or state individual markets, Medicare takes all 43 million seniors and puts them into one big giant group where just one entity pays the hospitals and doctors and bills: Uncle Sam. That’s the literal definition of single payer. One payer pays the federal government. Medicaid is more like 50 single payers since it’s paid for by the federal government AND the states, and the states determine a lot about what Medicaid will cover. So whether you live in a Democratic state or Republican one might determine whether you get great benefits, or if they try to slap a work requirement on you, or cut your benefits.

Now if you think about Obamacare, the biggest way that the Affordable Care Act expanded the number of people who had insurance was to put millions of Americans on Medicaid. During the Obamacare debate, there was a proposal to allow people to buy into a federal insurance program like Medicare, the Public Option. But thanks to Conservative Dem Indies, like Joe Lieberman, that died. The people who you keep hearing hate Obamacare tend to be the individual buyers, because their coverage is still expensive, because the pool isn’t as big as it could be, since Republicans fought the individual mandate, whose goal was to make the individual pool larger, and most importantly, healthier in order to get the cost down. But people who got Medicaid, they tend to love Obamacare because before Obamacare, they were among the nearly 47 million people who had no insurance at all. A number that’s now down 27 million. And that’s why Obamacare recipients tend to punish Republicans who is try to take it away. Just ask Matt Bevin in Kentucky.

Here’s a question. What if the pool in Medicare was to grow from 43 million people 317 million people? Basically the ultimate big group. I mean just like Social Security, it’s basically tax-funded retirement funds. It’s a tax-funded retirement fund that covers all 317 million Americans. What if there was a form of publicly-funded medical insurance that did the same thing? What would happen?

Reid hits all the high notes, here. Who Obamacare helped, and why. How Republicans kneecapped attempts to cover more people. The importance of the size of risk pools (bigger = better.) How which state you live in determines the kind of health care available to you. Why Medicare is so successful, and the cruelty of tying health insurance to one’s employer.

Welcome back, Joy. We need you.