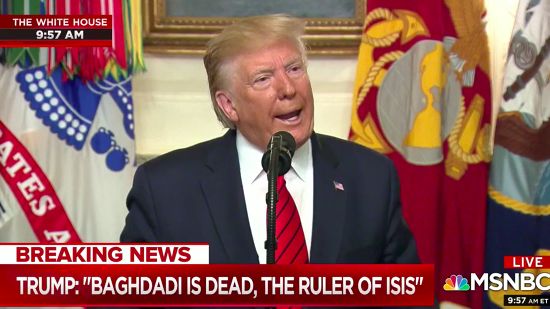 Yesterday I clipped this piece of Donald Trump’s press conference because it was so fantastic it was impossible to think it was anything other than the violence fantasy he replays in his own head, so I titled it that way.

It turns out I was right. Just like when he holds his rallies and describes women being raped and imprisoned by men spiriting them across the border — a scenario which clearly arouses him — so too is this.

“[Baghdadi] running into a dead-end tunnel, whimpering and crying and screaming all the way,” Trump told reporters.

He went on to say that Baghdadi then detonated a suicide vest killing him and his three children which he apparently used as human shields. “He died like a dog, he died like a coward. The world is now a much safer place,” he boasted.

But the crying, screaming part is pure Trumpian violence fantasy. For starters, there was no live video, in spite of Trump’s claims he watched it “like a movie.”

The New York Times reports that what Trump saw on his screen was “heat signatures of those moving around — which analysts labeled friend or foe — at the al-Baghdadi compound near Idlib, Syria.”

There was no sound. No real time imagery in the tunnel. That was just Trump’s screenplay.

This was confirmed during a press conference at the Department of Defense earlier today.

It’s really sick that the President of the United States is essentially sharing his violent fantasies with the press as if he’s crafting a Penthouse Forum letter. Even on a day where he had the possibility to look “Presidential” for a minute, he managed to screw it up. I’m sure his red-hatted cult loves it, but it’s honestly just…sick.