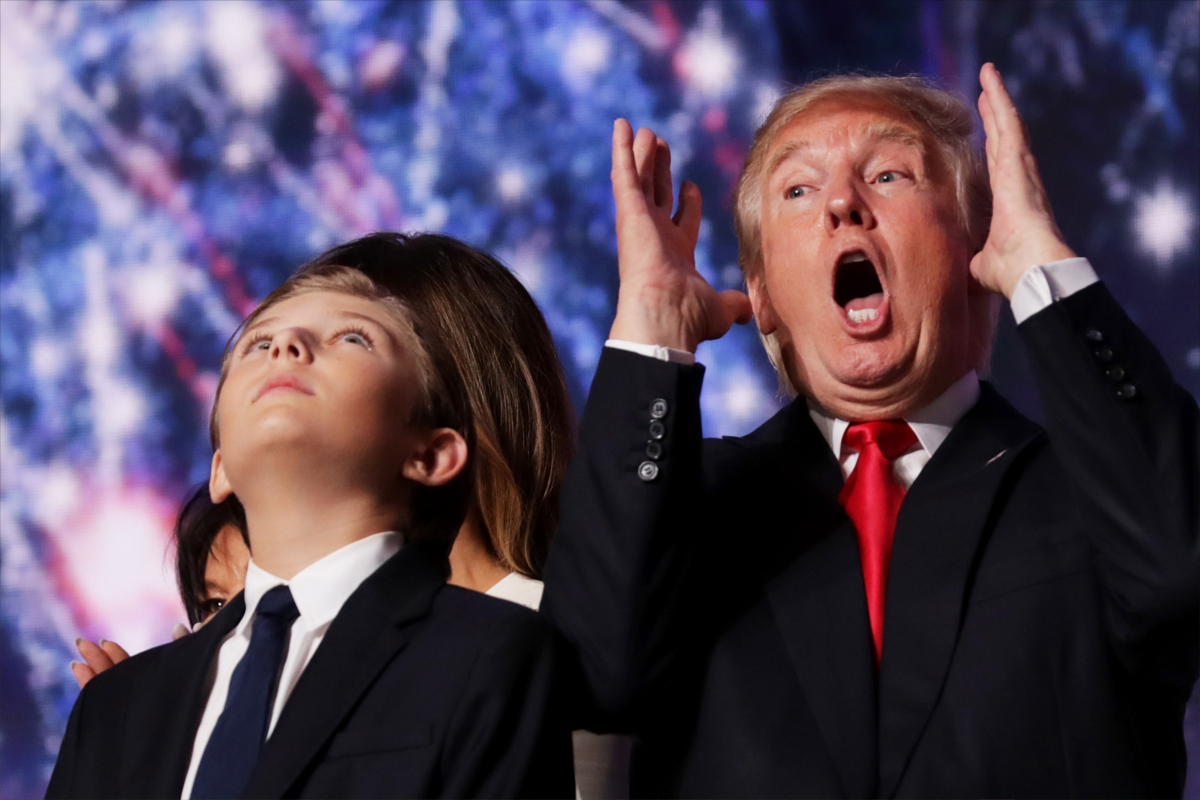 Critics of the President have mocked him for failing to bring son Barron Trump to game five of the World Series Sunday night.

In retrospect, the Washington Nationals fans’ reaction to the President’s presence made the decision seem proper.

The crowd booed Trump with a vengeance, even starting a “lock him up” chant. They did this despite the commander-in-chief announcing hours earlier a stellar moment in American military might with the slaying of ISIS leader Abu Bakr al-Baghdadi.

Knowing full well the atmosphere was ripe for partisan anger from the Washington crowd, Barron Trump did not attend the game.

And of course, liberals took the opportunity to mock the President and his son relentlessly.

RELATED: 15 Photos That Prove Barron Trump is Even Cooler Than The Donald

I have never seen a president’s kid used as a weapon the way Barron Trump is. There is no depths these Democrats will not stoop to.

Visit our friends at WHATFINGERNEWS: The Internet’s Conservative Homepage

The left will take any opportunity to criticize the President, but they love it even more when it’s at the expense of Barron.

So naturally, they seized on the opportunity to portray Donald Trump as a bad father who doesn’t love his son enough to bring him to a baseball game.

Imagine being a kid and your dad takes Lindsey Graham to the World Series instead of you.

A Father not taking his son to a baseball game, let alone a World Series game, is perhaps the worst indictment of a “family man” I’ve ever heard.

I have a feeling Trump could have gotten Barron a ticket, if he got tickets for Scalise and Gaetz.

Barron Trump should not feel bad. What dad takes his 13 year old son to a World Series baseball game when he gets free tickets?

Had the President actually brought Barron Trump to the game, the left would be criticizing him for subjecting his son to such a hostile situation.

WATCH: President Trump met with loud boos as he is introduced at the World Series in Nationals Park on Sunday night. pic.twitter.com/4RTW8ZqxqP

Barron’s last public appearance, other than appearing with the family as they enter or exit the White House, was at a 2018 Easter Egg Roll.

At that time, Jimmy Kimmel, host of Jimmy Kimmel Live!, took a shot at President Trump for being a neglectful father.

“He blew the whistle, and it was a fun day for the president — he got to eat chocolate,” Kimmel joked. “He even met a nice kid named Barron who he really liked.”

No wonder they shelter him at every possible moment.

This is the dumbest take ever! I mean f-ing stupid!!!

Maybe he knew that the scumbag lobbyists and liberal elite in the 94% leftist swamp of DC would behave exactly as they did and therefore shielded a child from that kind of behavior.

The left consistently mocks Barron Trump, with some of the insults being incredibly vile.

Recall, if you will, actor Peter Fonda threatening to kidnap Barron and “put him in a cage with pedophiles.”

Does anyone recall the time a Republican staffer named Elizabeth Lauten was forced to resign for daring to criticize the way Barack Obama’s daughters dressed? Yet blue checkmark liberals can mock Barron without any repercussions whatsoever.

It truly is sickening.