Siri, show me the worst op-ed of all time.

Yes, you read that right: This is an op-ed proposing a Romney-Gabbard presidential ticket. It’s in Newsday. It’s real. It’s written by two academics of a sort — I’ll tell you about them later.

With the next presidential election only a year away, House Democrats are committed to impeaching President Trump….

But if the House’s next steps are clear, the Senate’s are not. And that’s where things get interesting.

If the Senate convicts, Vice President Mike Pence will become president. It is nearly impossible to imagine his being the Republican standard bearer in 2020. Say what you will about Donald Trump, Pence could never win a general election. And everyone knows it.

Really? It seems to me “everyone knows” that no one in the Democratic field can possibly win — Andrew Sullivan was just telling us that yesterday.

… if the Senate acquits, the stink of impeachment will hang over Trump throughout the campaign. Either way, a House vote to impeach the president appears to be a win for the Democrats. That is, if things go according to plan.

Our writers believe Republicans could cook up a scheme to ensure victory. Here’s how it would work.

Senate Republicans could convict, or threaten to convict, thereby pressuring Trump to resign. They could even work out a deal by which they acquit in exchange for Trump not seeking a second term.

It’s hilarious that they believe Trump could be pressured to resign — the ultimate shame for a man who avoids shame at all costs — or that he would agree not to run and then keep his word.

Each of these options would leave the Republicans in need of a compromise candidate with very little time left on the clock. Republicans would need someone who understood the requirements of a national campaign, someone with widespread (and largely positive) name recognition, and someone on the record opposing both Trump and Trumpism.

Senator Mitt Romney is all of those things. Running Romney would immediately alienate the Trump base, but would attract voters from the sensible centers of both parties, along with independents, all of whom seem to be horrified by what they have heard thus far in the Democratic debates.

Oh, it’s the “sensible center” theory — you know, the one that’s proved astonishingly successful in past presidential elections for groups like Third Way.

Romney could play this centrist position to devastating effect with just about anyone sharing the ticket, but there is one very shrewd move that would allow him to walk into the Oval Office in a landslide: Romney could pick a Democratic running mate.

But he shouldn’t pick just any Democrat. He should pick one with a growing national stature, one with the background to appeal to Republicans and Democrats alike, and one who has openly accused the Democratic Party of playing a rigged game in its primary campaign.

No, really: These guys s ayTulsi Gabbard has “growing national stature.” She also has “the background to appeal to Republicans and Democrats alike,” even though she’s at 1.3% in national polls for the Democratic presidential nomination.

They agree on little politically, but that is a benefit. A Romney-Gabbard ticket could be based, legitimately, on decency, truthfulness and honor.

Truthfulness and honor? Forget the deceitful little ratfuck Gabbard is currently trying to engineer. Let’s recall that during the 2012 presidential campaign, Romney was almost as shameless a liar as Trump is now.

They could point the American people away from the toxicity that has come to infect American political life, and remind us that we are not two countries seeking disparate futures, but one people experimenting with different means to the same end.

A Romney-Gabbard ticket is a long shot. But it is a plausible long shot. And a long shot is increasingly what America needs. The ticket would not make the party faithful on either side of the aisle happy, but why should they be the final arbiters of who ascends to the presidency? It’s time to make America decent again, and this may be the best way to accomplish that difficult goal.

So we’re “one people,” except that this ticket would infuriate “the party faithful on either side of the aisle.” (I guess stalwart Democrats and Republicans aren’t people, or at least aren’t part of “the people.”)

This is insane, of course. Who would write such a thing?

Here’s what we’re told about the authors:

Antony Davies is associate professor of economics at Duquesne University. James R. Harrigan is managing director of the Center for the Philosophy of Freedom at the University of Arizona. They host the weekly podcast Words & Numbers. They wrote this for InsideSources.com.

Davies, Wikipedia informs us, is the Milton Friedman Distinguished Fellow at the Foundation for Economic Education. The Foundation describes its purpose this way:

FEE’s mission is to inspire, educate, and connect future leaders with the economic, ethical, and legal principles of a free society.

SourceWatch tells us that the Foundation “is listed as a partner organization of the Charles Koch Institute…. FEE has also received funding from DonorsTrust and Donors Capital Fund, “two funds that have been closely tied to the Kochs but which obscure the percentage of their grants coming from Koch money.” Greenpeace describes the Foundation as a “Koch Industries climate denial front group.”

The Foundation for Economic Education promoted a list created by Senator James Inhofe, who gets more political donations from Koch Industries than any other single source, naming 400 scientists who supposedly doubt the climate change scientific consensus. In examination of the authenticity of this list, the Daily Green found that of the 400 names, 44 were TV weathermen, 70 have no background in climate science, and 84 were recipients of industry money.

FEE staff are linked to the Mackinac Center, Americans for Prosperity and the Cato Institute.

Davies is also affiliated with the Heartland Institute, a group described by The Economist as “the world’s most prominent think-tank promoting scepticism about man-made climate change.” 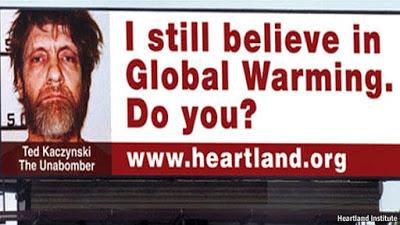 Harrigan tells us he’s the managing director of the Center for the Philosophy of Freedom at the University of Arizona. The university’s newspaper, The Daily Wildcat, has written this about the Center:

… donations from Charles Koch helped fund the Center for the Philosophy of Freedom. Better known as the “Freedom Center,” it was established in 2008 by UA Philosophy Professor David Schmidtz, and initially funded by Randy Kendrick.

… Randy is wife to Ken Kendrick, owner of the Arizona Diamondbacks. She was part of a Koch-led donor network that donated almost $900 million on the 2016 election cycle.

… In 2010, Schmidtz secured more private funding for the center, allowing him to hire four core faculty members. Of these donations, $1.8 million came from Charles Koch.

Harrigan is also the F.A. Hayek Distinguished Fellow at the Foundation for Economic Education (see above).

This op-ed isn’t a plea from the “sensible center.” It’s a plea from Kochistan. Two guys living off Koch wingnut welfare are heaping praise not only on Romney, but also on a “Democrat” we actual Democrats are being told we owe a much more respectful hearing. Of course Kochworld would like Romney, but this tells me a lot about phony Tulsimania. I wonder just how much of the right-wing praise for Gabbard is being instigated by the Koch network.