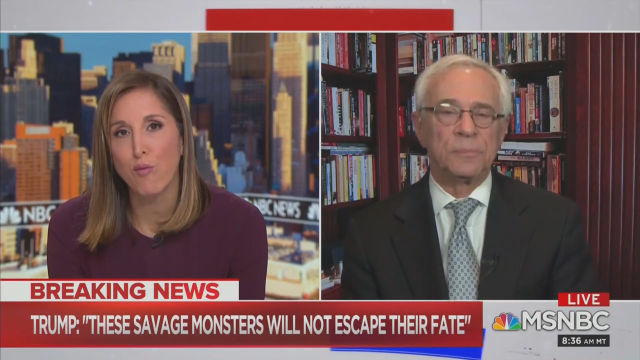 You know that the news of the death of ISIS leader Abu Bakr al-Baghdadi during a raid by US forces came as a terrible blow . . . to the liberal media. Their first reaction was surely to worry that this success would strengthen President Trump.

And so the MSM predictably is going about its business of downplaying the significance of the event—and even seeking to turn it into a negative. Take, for example, Yasmin Vossoughian, guest-hosting Joy Reid’s MSNBC AM Joy show this morning, and doing her best to find the cloud on the silver lining. She managed a magnificent bit of concern trolling with this line:

“I wonder here if this type of killing only reinforces the ideology of Baghdadi’s followers? And in fact, strengthens it?”

MSNBC military analyst Jack Jacobs took Vossoughian’s hint, saying, “well, it doesn’t make it any easier for those of us who want to destroy the organization completely.”

This, despite Jacobs having earlier said that the elimination of Baghdadi “makes it extremely difficult for them to operate multilaterally in a wide variety of places . . . So this is a very big deal, getting rid of this guy.”

Vossoughian also brought up — just like Liberal Twitter did — tweets of Trump from 2012. Interviewing former Colin Powell aide Lawrence Wilkerson, she said, “I actually want to bring up a tweet the president made … about then-President Obama after the killing of Osama bin Laden. He basically says President Obama cannot take credit for the killing of Osama bin laden. Do you feel he’s doing that here despite the fact he said that then?” Wilkerson said Trump has a dangerous psychological hangup with Obama.

Look for other members of the liberal media in coming days to find other imaginative ways to downplay the significance of the killing of Baghdadi, and above all, to try to deprive President Trump of any credit in connection with it.

JACK JACOBS: Destroying him makes it extremely difficult for them to operate it multilaterally in a wide variety of places, to coordinate activities in a wide variety of places. Whoever is going to take over, and undoubtedly,they have somebody to take over, there’s a series of people who might take over. Whoever it is has got to — a big job ahead of them. And when you destroy a leader of an organization like this, it becomes fragmented. It becomes more difficult to deter them from doing things. But it becomes much easier to take them out bit by bit. So this is a very big deal getting rid of this guy. We’ll see what happens over the next few months or so. But I suspect we’re going to see terrorist operations in a number of different countries where

YASMIN VOSSOUGHIAN: I wonder here if this type of killing only reinforces the ideology of Baghdadi’s followers. And in fact, strengthens it.

JACOBS: Well, it doesn’t make it any easier for those of us who want to destroy the organization completely.

>> Help us fight back against the media’s impeachment crusade. <<