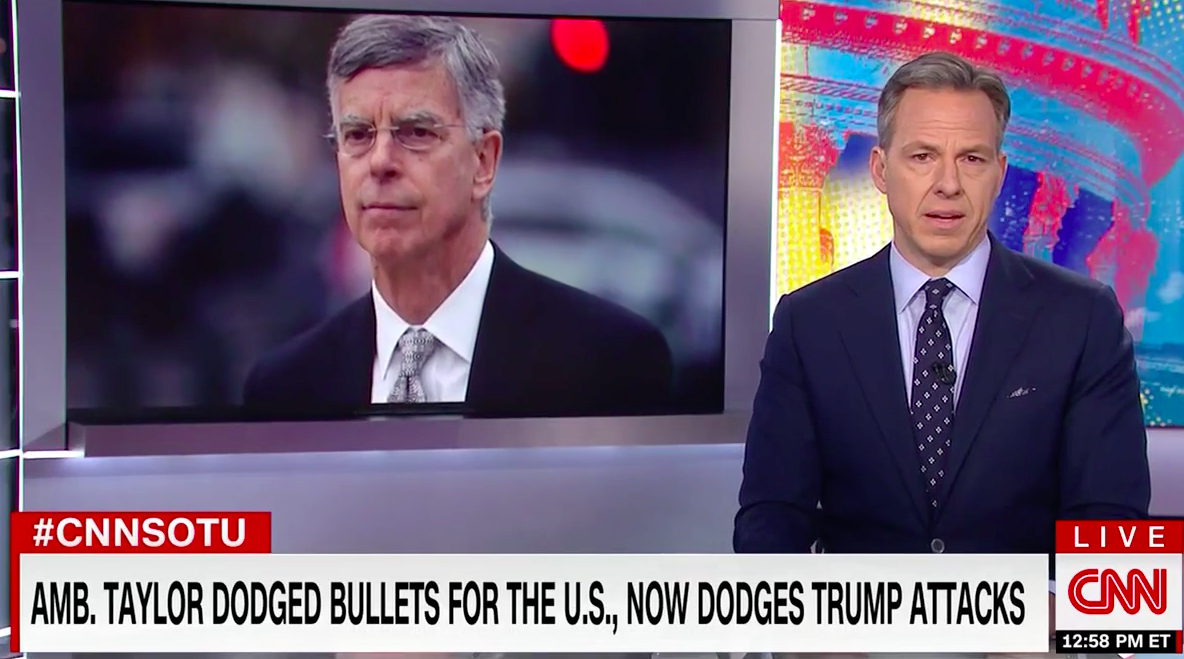 Jake Tapper tackled Donald Trump’s shameful characterization of Ambassador Bill Taylor as a “never Trumper” who is “human scum” at the end of State of the Union Sunday morning.

Tapper was particularly incensed about the “human scum” characterization, as were Taylor’s colleagues and West Point classmates. Retired Colonel Bob Seitz spoke to Tapper about Taylor and his values for an article Tapper did covering reactions to Trump’s smear.

The president then called Taylor a never-Trumper and there’s no evidence for that. And he said that all never-Trumpers, quote, are human scum. Human scum.

Thousands of miles away, watching this all unfold, was one of Taylor’s West Point classmates with whom he served in Vietnam, now retired colonel Bob Seitz, on the left in this photo in Vietnam, in 1971, Bill Taylor is on the right. For 18 months Seitz and Taylor jumped from helicopters and hiked through the jungle-covered mountainous terrain, enduring fatigue, hunger, bad weather, dying, killing, and a lot of terrible wounds. They were rifle company commanders of the 506th regiment of the 101st Airborne, the same regiment from the World War II book and series Band of Brothers. The motto of the 506? Currahee, meaning being we stand alone.

Seitz also told Tapper that Bill Taylor was and is “the embodiment of the military academy cadet prayer,” which says, “make us to choose the harder right instead of the easier wrong and never be content with a half truth when the whole can be won.”

Tapper also interviewed former Ambassador to Afghanistan Karl Eikenberry, who said, “Bill also volunteered for the tough posting, and served in Afghanistan, Gaza, and difficult spots in the Middle East.”

All of this to say that to a man, Bill Taylor’s colleagues, friends, and fellow soldiers testify to the character of the man who spoke plainly about Donald Trump’s abuses of power.

“So, President Trump can suggest that Bill Taylor is “human scum” and the folks in the White House can attempt to smear him, but to his friends the president is not just attacking Bill Taylor,” Tapper said. “He’s attacking the values Taylor personifies — duty, honor, country.”

General Eikenberry told Tapper that Taylor’s “integrity and courage are the true marks of patriotism, loyal to an oath of office and never to be corrupted or intimidated by those seeking personal gain at our Nation’s expense.”

Tapper closed with this: “You can ask yourself, of the behavior and values you have seen displayed during this impeachment inquiry, whose make you proud to be an American and whose might make you ashamed?”

Not a tough call at all.