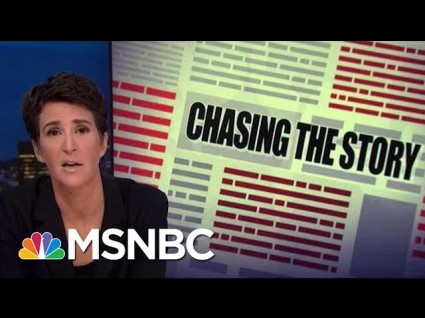 On Friday night, Rachel Maddow did something pretty rare – she straight up bashed her own employers at NBC/MSNBC regrading their handling of reporting on Harvey Weinstein and the allegations of sexual harassment against him. Her comments were a scathing rebuke of how Ronan Farrow’s reporting was stifled and flat out blocked from being made public. Maddow had Farrow on her show as a guest as well, which sent a powerful message to the heads of NBC.

“The allegations about the behavior of Harvey Weinstein and Matt Lauer are gut-wrenching at baseline, no matter who you are or what your connection is to this story. But accusations that people in positions of authority in this building may have been complicit in some way of shielding those guys from accountability, those accusations are very, very hard to stomach.

The amount of consternation this has caused among the rank and file people who work here would be almost impossible for me to overstate.”

She then broke the news that NBC will be releasing employees from NDA’s that would have otherwise prevented them from talking about or reporting any misconduct.

She read a statement from an NBC spokesperson that said: