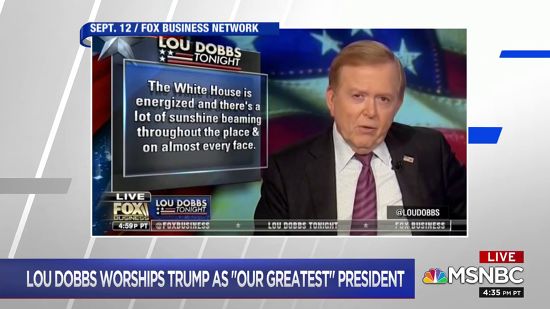 Nothing new here, except that as Trump’s problems mount his defenders, like Fox Business News’ Lou Dobbs become ever more obsequious, absurd to the point where parody is impossible. And Dobbs himself doesn’t seem to mind, as he replied to Matthews’ charges at the end of his broadcast. And why would he? Dobbs probably just earned himself another pat on the head from his master, Trump.

Matthews tonight brought up Lou Dobbs as such an example, comparing his very pro-Trump commentary to “what you would expect to hear on North Korean state TV.”

He showed clips of Dobbs’ most pro-Trump comments, including when he recently talked about “sunshine beaming” throughout the White House, though we should note it’s not the first time the comparison has been made between Dobbs and North Korean propaganda.