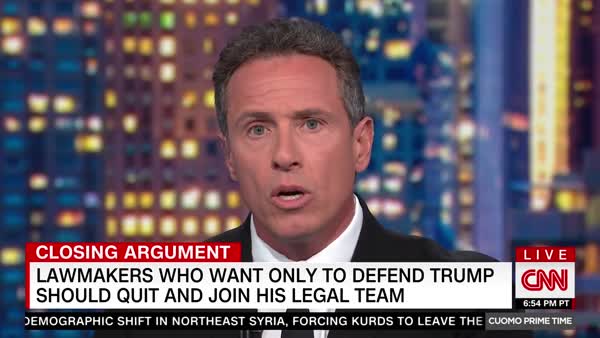 Cuomo began by noting that the actual evidence in the form of sworn statements and texts “by Republicans on Team Trump” point to “an obvious abuse of power” by Donald Trump. “So when you don’t like the facts and the proof comes from your own people, the only way to defeat the process is to fight the process itself,” Cuomo added.

“Enter Senator Lindsey Graham,” Cuomo continued. He played a quote of Graham introducing his resolution and calling the impeachment inquiry “out of bounds,” “inconsistent with due process as we know it” and “a substantial deviation from what the House has done in the past regarding impeachment of other presidents.”

We soon saw Graham “substantially deviating” from past behavior. Cuomo pointed out that “Senator Supercilious” praised the closed-door depositions used in the Clinton impeachment investigation. “The depositions, I think, will determine whether or not we go forward with hearings. I think it’s a very smart thing to do, is to depose these people and find out what they’ve got to say and not drag this thing out unnecessarily,” the Clinton-impeachment Graham said.

“Now Graham says it’s a lynching. Then it was a very smart thing,” Cuomo added. Not only that, Graham has acknowledged Trump’s wrongdoing.