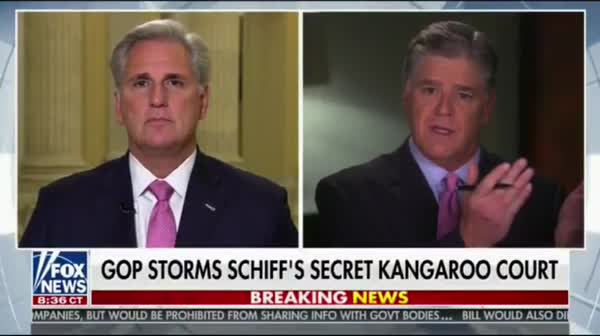 After a group of House Republicans stormed an impeachment-inquiry hearing and breached national security while they were at it, Sean Hannity commanded House Minority Leader Kevin McCarthy (R-CA), “This has to happen every day.”

This is the behavior Hannity can’t seem to get enough of (via Law & Crime):

In a jarring protest of Democrats’ impeachment inquiry into President Donald Trump, House Republicans on Wednesday delayed the process by storming a secure facility during a witness deposition and refusing to leave. The reckless, pizza-fueled, rule-breaking, and potentially law-breaking maneuver was reportedly supported by President Trump.

The faction of approximately two dozen House GOP members, reportedly led by Rep. Matt Gaetz(R-Fla.), barged into the Sensitive Compartmented Information Facility, also known as a SCIF, interrupting the deposition of Deputy Assistant Secretary of Defense Laura Cooper, yelling and shouting down the procedure as a “sham process.”

Law & Crime also noted that some of the members brought their cell phones into the SCIF, a serious breach of national security.

It just so happens this stunt occurred one day after devastating-to-Trump testimony by the top U.S. diplomat in Ukraine.

But, hey, Donald Trump approved this latest assault on American democracy, national security and the separation of powers in order to protect his political fortunes and that means stooge Hannity was there to bully on Trump’s behalf.

In other words, Hannity proved (again) he is just as willing as his beloved Donald Trump to throw America under the bus in service of their conjoined political interests.

HANNITY: And finally, and it’s a good thing, earlier today a group of Republicans stormed into the corrupt Adam Schiff’s secret Soviet-style impeachment hearing. Now, why weren’t they allowed to be there?

If Hannity cared about the facts half as much as he cared about Trump’s/his own well-being, he’d have told viewers that the reason some of those Republicans were not allowed in was because only committee members are allowed. Furthermore, both Republicans and Democrats on the committees involved have opportunities to question witnesses. In fact, 13 of the 41 complaining Republicans sit on those committees and have the ability to question witnesses and review documents.

It’s worth pointing out that there are 197 Republicans in the House which means the vast majority of them did not participate.

Soon after Hannity introduced McCarthy, he issued his marching orders. Hannity frantically waved his glasses around as he spoke:

HANNITY: You’re the leader of these Republicans, Congressman. This has to happen every day.

McCarthy acted compliant, or maybe the word should be “complicit.”

MCCARTHY: This is a Star Chamber. England abolished the Star Chambers in the 1600s. Our founding fathers wrote into our Bill of Rights a due process. Why? Because they were so fearful. And here we are in America today, back with the Star Chamber. Where? In the US House of Representatives under Nancy Pelosi.

The question the American public has to ask, what are they so afraid of, of people knowing? These are duly elected members of Congress that people have lent their voice to for two years to represent them and they’re denied from going into a meeting. They’re going to have to vote on this, but they’re not given any information. What is Adam Schiff hiding and why is he afraid to show the American public?

FACT CHECK: This is more BS. Democrats will hold public hearings as soon as mid-November. Furthermore, the Constitution lets the House of Representatives set the rules for the impeachment process.

None of that made it into the complete discussion, even though Hannity pledged, at the end of his show, “Our promise, we are going to seek the truth.”

Watch Hannity and McCarthy show their disregard for America’s democracy and decency – as well as truth – above, from the October 23, 2019 Hannity.

Published with permission of Newshounds.us