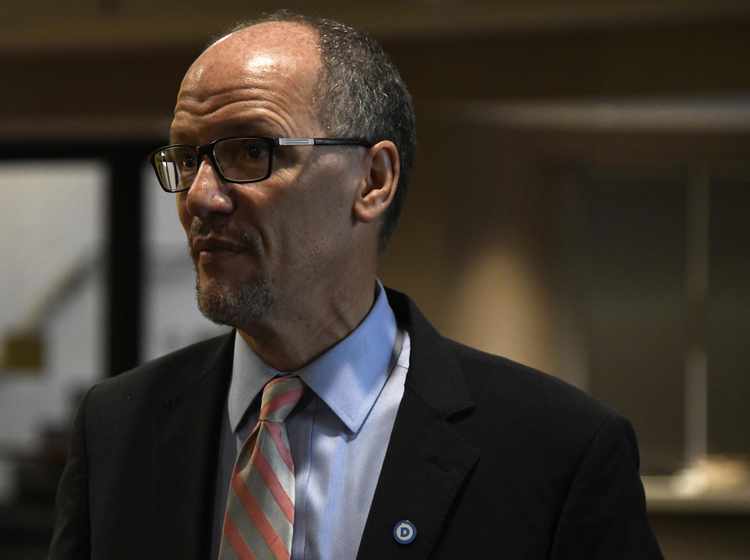 Sure, they’re trying to reelect the most unpopular president in modern times and they have their work cut out for them, but it’s no wonder the Republican National Committee’s formidable operation has Democrats freaking out.

For months Democrats have worried about a potentially lethal combination of Trump’s incumbency advantage coupled with the unparalleled strength of the GOP organization — and that was before their newfound fear that they may not end up with a suitable nominee to take on even a deeply embattled Trump. While he rants on Twitter and holds campaign rallies, Democrats in a primary race get little notice or coverage. Meanwhile the Trump campaign is carpet-bombing Facebook with ads and the RNC is spreading a volunteer army across key swing states, all while breaking fundraising records allowing them to deploy critical resources nearly a year before a Democrat is nominated.

Whoever thought this fight would start in the general election campaign had it all wrong. This terrifying realization is now causing allies of former Vice President Joe Biden to mull the creation of a super PAC since he is not only struggling to raise adequate sums but has been forced to fend off attacks by Trump months before the first votes in the primary contest will even be cast.

In August, Democratic National Committee Chairman Tom Perez acknowledged the threat after the RNC tripled the amount the DNC raised in July. In an email he sent supporters sounding the alarm, he wrote that “our eventual nominee won’t stand a chance against Trump and the GOP’s fundraising machine unless we start making strategic, early investments right now.”

The combined total raised online from small donors in the third quarter between the RNC, the Trump campaign and the Trump Make America Great Again Committee was $45 million, with a surge of 313,000 first-time small-dollar donors just in that quarter.

Impeachment has been a boon to GOP fundraising and grassroots organizing. Since the official start of impeachment, $10.3 million has been spent between the RNC and the Trump campaign in ads on air and online and the RNC has held 60 events in swing or Trump districts held by Democrats, and in Senate and gubernatorial races, just since Sept. 30.

For the 2020 campaign, RNC has staff deployed in 19 states including New Hampshire and New Mexico, with five regional communications directors and nine regional political directors.  By Election Day there will be 2 million volunteers coordinated by 60,000 “fellows,” who are trained grassroots volunteers. In 2016 the RNC had 5,000 fellows, then in 2018 that grew to 25,000, and more than 30,000 additional fellows are being trained up now.  Volunteers download an app, then go door to door in assigned teams that break down by state, then “turf,” then neighborhood. “We don’t care about offices,” said RNC spokesman Rick Gorka.

In Arizona, now a swing state after decades trending red, the RNC will be tracking 207,284 so-called “disengagers” statewide — that is, people who voted in 2016 but not 2018. They already know, for example, their specific goal in “turf 24” outside of Maricopa County: to reach 14,537 swing voters they need to win over.

In another now swingy state — Texas — the RNC will be targeting a universe of 970,000 Latino voters who their analysis shows are 20% more likely to support Trump now than in 2016. Data and loads of money allow the RNC to identify voters who may not now be gettable but are receptive, and who — with time — could become supporters. In Florida, volunteers will follow up on those voters who came to “Welcome to Florida” events held when they moved from Puerto Rico after Hurricane Maria. The initial meetings helped storm survivors get information and resources that could help them get settled in the Sunshine State, with direct outreach about party and voting coming later on.

Using dynamic scripting, the volunteers tailor the message to different voters.  The message with suburban voters who may have lost patience with Trump is: “You’re better off than you were four years ago, and that’s because of Donald Trump.” There are various issues that help volunteers connect with different groups of voters — immigration for some, social matters for others, and for Latino voters, talk of faith, family and education concerns such as school choice.

Few resources will be wasted as the RNC models targets voters and knows who they are, what they do, where they shop, where they eat, and where they exercise.  That data is refreshed regularly in all the battlegrounds — every state is refreshed quarterly at a minimum.

Republicans admit they learned a lot from former President Obama. After 2012 the autopsy of the GOP defeat spoke to electoral liabilities the party should remedy — much of which, like more inclusive rhetoric and immigration policies to attract minority support, have been abandoned in the party’s embrace of Trump. But the party set out to emulate what Obama had built using data and those community-organizing skills. The GOP studied the book “Groundbreakers: How Obama’s 2.2 Million Volunteers Transformed Campaigning in America.” But Republicans saw what would prove to be a mistake by Democrats: making their operation candidate-focused. Obama’s decision to build his own organization left the Democratic National Committee weakened and ill-prepared not only for 2016 but for 2020. So Republicans set about creating a party structure that would help any Republican nominee in 2016.  “The legacy of what we started after the 2012 campaign, a permanent data-driven ground game, will outlive all of us,” said Gorka.

Democrats may have built up a similar infrastructure, but they are lacking the resources the party needs to be battling Trump now and every day through their convention and right up until Election Day.  Without that money, their efforts cannot be as effective and they won’t be able to be everywhere. Republicans have a steep challenge ahead to reelect Trump, but they have prepared well for the fight. Democrats, looking at the years 2016-2019, can’t say the same.

A.B. Stoddard is associate editor of RealClearPolitics and a columnist.