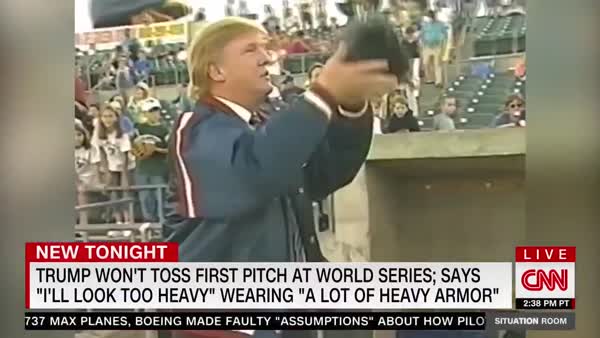 Unless you have been living under a rock, you know that we are in the middle of the World Series between the Washington Nationals and the Houston Astros (go Nats!). So far, the Nationals are up 2-0. If the Nationals do not sweep the next 2 games, the 5th game will be in Washington on Sunday. Usually, the President throws out the first pitch, but this year the Nationals did not invite Donald Trump. Instead, they invited outspoken Trump critic and humanitarian, Chef José Andres.

CNN chewed on this a bit/

WOLF BLITZER: President Trump said he plans to attend game five, that is Sunday, if there is a game five. The Nats are ahead 2-0 right now but doesn’t want to throw out the first pitch. He said “they have to dress me up in a lot of heavy armor. I’ll look too heavy.”

There is a lot of politics going on. Show our viewers some video. The President throwing out, as a private citizen in 2004, first pitch in a minor league game and in 2006, at a Red Sox game, and you could see him over there right now. But go ahead.

BLITZER: We all agree, go Nats.

And it goes on…to Taft, the 27th President.

Will Donald Trump get booed when the camera pans to him? My bet – absolutely. Chef Andres will get a standing ovation, Trump will get booed on live TV. For a man with a fragile ego, it will be devastating. I suspect he won’t even show up. Maybe he’ll squeeze in a round of golf or claim his bone spurs are acting up.