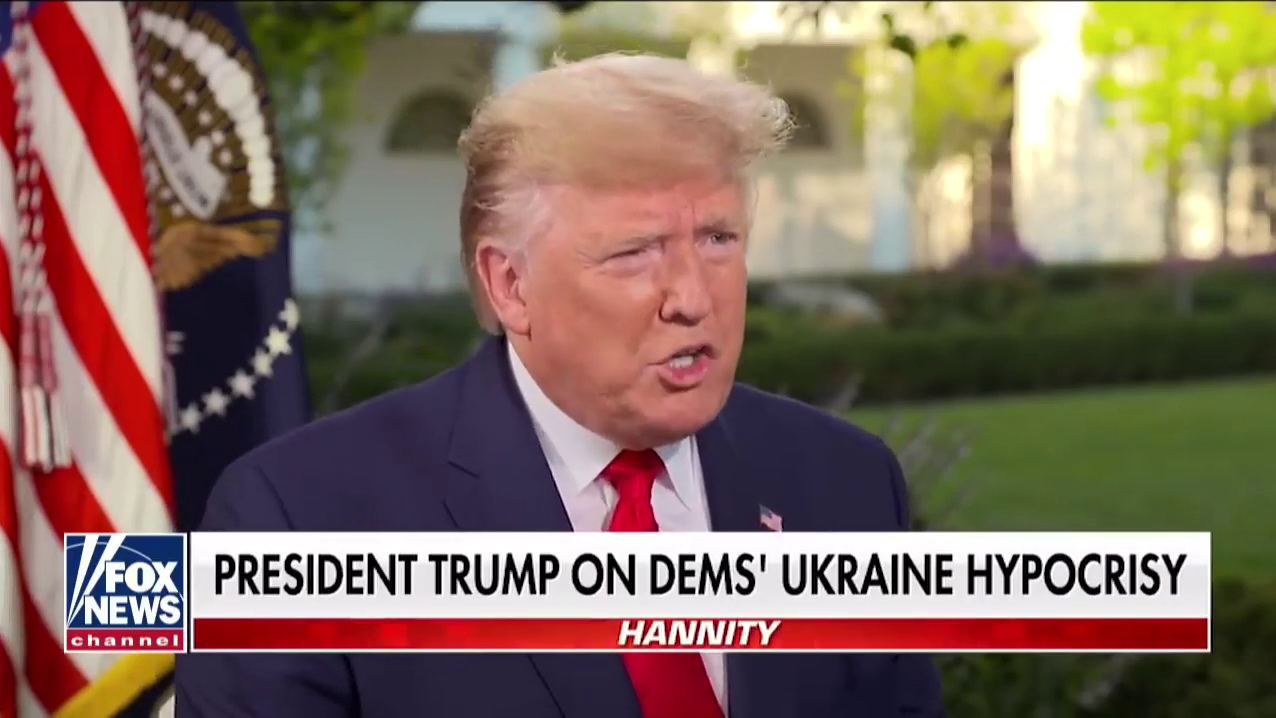 Apparently, Donald Trump thinks that everything he said on that now-infamous call to Ukraine’s President Vlodymyr Zelensky was “perfect” at least partly because his Fox News sycophants have said so.

Trump spent nearly 42 minutes rambling and whining about impeachment, the Russia investigation, the media and even Republicans who have not defended him enough on the Hannity show last night.

But maybe because he has no good defense for withholding Congressionally appropriated aid to Ukraine while asking “for a favor though,” (and more damaging information keeps coming out) Trump cited Gregg Jarrett and other Hannity show lickspittles as “proof” he did the right thing in asking the country to dig up political dirt on the Bidens.

At 2:08 in the interview, Trump suggested that someone “out of Ukraine” wrote the Steele dossier “and I would like the attorney general to find out what’s going on.” Then there was this:

TRUMP: Because you know what? We’re investigating corruption. And I actually heard Gregg Jarrett and numerous people the other day say I have an obligation to do that.

But when I look at experts that are on your show — and other experts — they’re all saying you have an obligation to do that. So I think that I have a friend who is a very good lawyer — he read that conversation — it’s not a letter, it’s a conversation — taken down and transcribed, a perfect conversation …

it was a perfect transcription of a perfect conversation.

Jarrett, a so-called “legal and political analyst” for Fox News, really serves as a Trump defense attorney on the network. Recently, when asked by a skeptical Fox News host, “But do you fault the president for anything?” Jarrett replied, “Well the president, I suppose, bears blame, as he will tell you, for appointing Jeff Sessions.”

Jarrett’s legal “acumen” was seen in a December 2018 Twitter meltdown in which he attacked the federal prosecutors who wrote the Michael Cohen sentencing memo that implicated Trump in two federal crimes. Calling the prosecutors “morons” and “snot-nosed kids, fresh out of law school,” Jarrett accused them of having “no real experience” before adding, “They don’t know anything about the law. They don’t understand the Federal Campaign Election Act.”

Jarrett never cited any particulars the prosecutors got wrong. But we soon learned that it was Jarrett who demonstrated a not-so-keen grasp of the law, as author Kevin Kruse correctly pointed out:

In a blurb that was probably written before the impeachment inquiry, Media Matters aptly described Jarrett as “one of the loudest shills of the president on the special counsel’s investigation and possible collusion with Russia.”

But if there’s any louder Trump shill on Fox, it would be Sean Hannity.

Watch Trump’s desperate defense of his indefensible Ukraine extortion above, from the October 21, 2019 Hannity.

Published with permission of NewsHounds.us