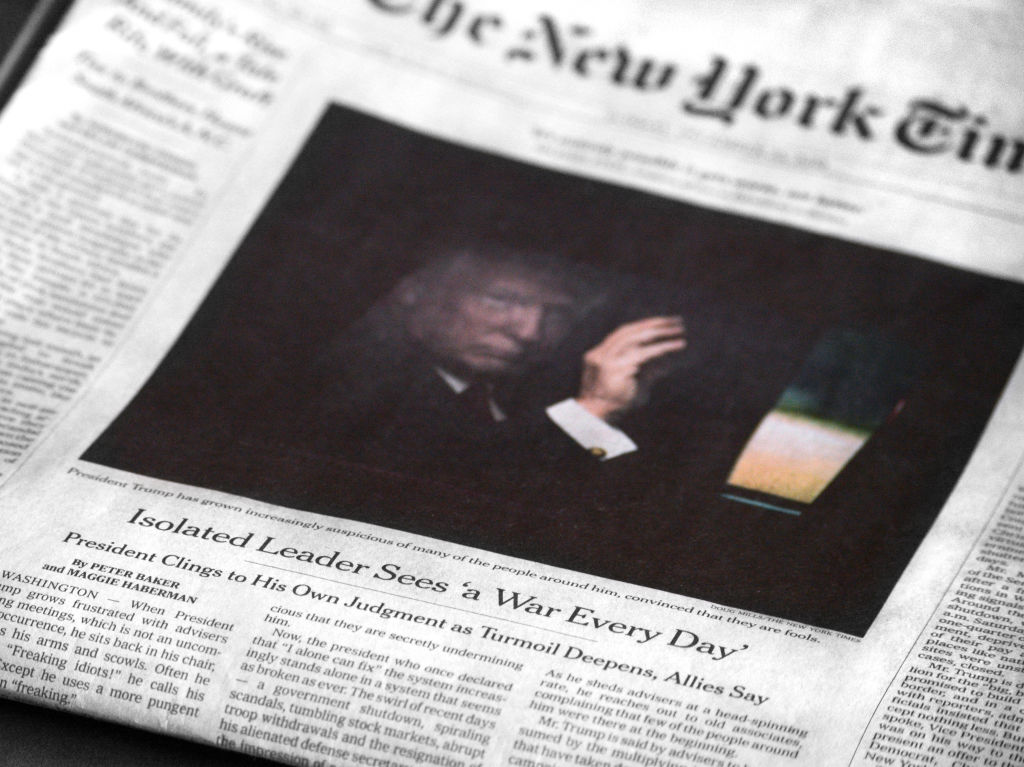 No, wait — did I say “chilling”? I meant pathetic.

The White House said Tuesday it will not be renewing subscriptions to The New York Times and The Washington Post, two papers the president frequently attacks as “fake” and which he suggested canceling the previous night in a TV appearance.

Monday on Fox News’ “Hannity,” President Donald Trump called the Times “a fake newspaper” and said “we don’t even want it in the White House anymore.”

Trump’s “terminate” remarks were interpreted by journalists on Twitter as meaning canceling paper subscriptions, rather than kicking reporters out of the White House. White House press secretary Stephanie Grisham confirmed to POLITICO that he was talking about subscriptions, “which we won’t be renewing.”’

He really doesn’t know, does he? He doesn’t understand that people can read the Times and the Post on their phones and computers, and that they can do this using their own personal subscriptions. Yes, even in the White House.

(He also doesn’t know that staffers may be publicly announcing that the subscriptions won’t be renewed in the hope that Trump will soon forget that he demanded their cancellation, which is probably a safe bet.)

There’s a preposterous gloss on this from a site co-founded by Laura Ingraham, LifeZette.

Among other examples, the president is likely referring to the controversial 1920s-era New York Times reporter Walter Duranty, who ignored reports of massive and gruesome Soviet atrocities, and 1950s-era Times reporter Herbert Matthews, who made the glorification of Fidel Castro a journalistic campaign. Matthews refused to accept evidence Castro was a communist — and was himself a propaganda tool.

It’s hilarious that LifeZette’s David Kamioner believes that Trump has ever heard of either of these reporters.

Trump plans to cancel the White House’s dead-tree copies of the Times and Post? It’s moves like this that make me question recent mainstream-media stories about the Trump campaign’s awe-inspiring online advertising campaign and its earth-shattering campaign rallies. We’re told that the rallies and the Facebook ads are a mortal threat to the eventual Democratic nominee because they’re motivating Trump loyalists to turn out — but Trump motivates the loyalists, and only the loyalists, every day. The newspaper cancellations (or, strictly speaking, non-renewals) are part of today’s daily motivation for the loyalists. The typical day’s tweets and helicopter talk are motivation. Nearly everything Trump does is intended to motivate the base (and also make Trump feel better about himself and his life).

As I often say: How motivated can these people get? They can each only vote once. Meanwhile, the rest of the electorate is alienated by everything that motivates the base, as the recent PRRI poll notes:

So yes, Donnie, you just keep selling your product to people who’ve already agreed to buy it.