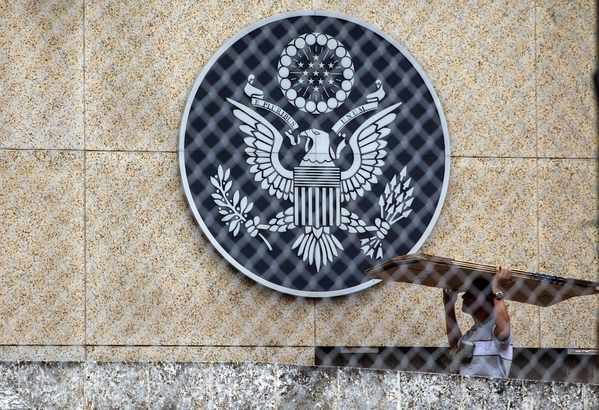 House Democrats are grilling a stream of disgruntled career diplomats in a basement hearing room of the Capitol. The hearings are supposed to be secret, but — no surprise — Democrats leak snippets of the testimony daily. They’re hoping it will add up to a case for impeaching President Donald Trump.

So far, all the testimony actually proves is that these State Department diplomats think they — not President Trump — ought to be running the nation’s foreign policy.

Never mind executive privilege or impeachment. The most pressing constitutional issue at hand is who decides the nation’s foreign policy: the president or the permanent bureaucracy.

House Democrats are accusing Trump of offering Ukrainian President Volodymyr Zelensky a quid pro quo: dirt on former Vice President Joe Biden in exchange for nearly $400 million in aid. Trump’s July 25 phone call with Zelensky is the subject of the hearings, but these witnesses have no firsthand knowledge of the call.

Instead, they’re whimpering about being sidelined by the Trump administration and objecting that top ambassadorial appointments are going to Trump’s friends instead of to them. They’re seething with disdain for the president.

Trump’s chief of staff, Mick Mulvaney, described what’s happening: “A group of mostly career bureaucrats” refuse to accept that “elections have consequences. And foreign policy is going to change from the Obama administration to the Trump administration.”

The State Department insurrection spans embassies across the globe.

On Aug. 8, Chuck Park, a 10-year foreign service officer stationed in Mexico, penned a vitriolic public resignation for The Washington Post, condemning Trump for carrying out “mass deportations,” failing “dreamers” and pursuing a “toxic agenda around the world.” He publicly accused the president of “naked cruelty.”

Good riddance to Milton and Park. Resigning is what diplomats should do when they are fundamentally at odds with the administration’s foreign policy approach. Taxpayers should not have to foot the bill for bureaucrats intent on sabotaging the president. No one elected them.

Predictably, the foreign policy establishment disagrees. William J. Burns, who capped his career as deputy secretary of state for President Barack Obama, argues that State Department careerists should be in charge, not the president and his appointees.

But these career diplomats favor globalism, open borders and huge American handouts to multinational organizations and third-world nations. The public elected Trump to implement the opposite — an America First agenda. Trump must wrest control to achieve that.

Fifty years ago, Henry Kissinger understood that the diplomatic bureaucracy was biased against President Richard Nixon’s foreign policy goals. As national security adviser, Kissinger pulled control of diplomacy into the White House, inciting resentment and pushback from the State Department.

Again, in 2003, Newt Gingrich warned that State Department bureaucrats were engaging in “a deliberate and systematic effort” to undermine President George W. Bush.

It’s happening again. The bureaucrats are slithering up to Capitol Hill to complain about President Trump. History reminds us what’s actually going on here.

On Tuesday, Taylor told the hearing that another diplomat, Gordon Sondland, had informed him there was a price for military aid. But Sondland denies that, insisting the president made it clear there was no quid pro quo.

Too bad for the impeachment-hungry Dems and their sympathetic allies from the State Department.

Disagreeing with the foreign-policy elites is not an impeachable offense. In fact, millions of Americans are cheering Trump on.