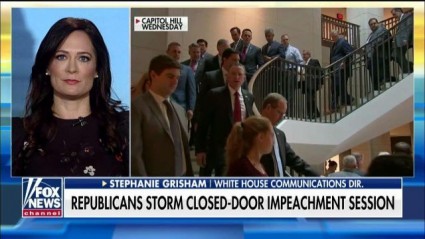 Well, it’s nice to know where we stand.

On Wednesday, President Poopy-head called Never-Trumpers a bad name. It was mean. He said Republicans who didn’t support him were “human scum.” Now, I would never use language like that about the Tangerine Twatwaffle, but he seems fine saying it about Republicans who dislike his using the Constitution to wipe his a$$.

So, on Thursday, Mango Mussolini’s press secretary, Stephanie Sh*t-For-Brains Grisham went on Fox and Friends to clear things up. Silly Fox and Friends. Brian Kilmead asked if President Sphincter-face regretted calling Never-Trumpers “scum.” She said, “Nooooooo! He shouldn’t! ANYONE who opposes the president is scum!”

KILMEADE: The president, yesterday, called the Never-Trumpers “scum.” Does he regret that?

GRISHAM: No. No he shouldn’t. The people who are against him, and who have been against him, and working against him since the day they took office are just that. It is horrible that people are working against a president who is delivering results for this country, and has been since day one. And the fact that people continue to try to negate anything that he is doing and take away from the good work he is doing on behalf of the American people, they deserve strong language like that.

Hope everyone has caught the fact that she has expanded his butthurt rant against old-guard Republicans to include ALL of the rest of us, too. You did, right? So, EVERYONE who is not supportive of Trump now is scum. Fragility with topnotes of facism.

THERE! DOESN’T EVERYONE FEEL BETTER NOW?

I may be hopelessly naïve scum, but I thought in this nation people were permitted to disagree with a president, yes, even take steps to work against what they were trying to accomplish, without being officially labelled “scum” by those in power. Lord knows President Putinkakenlecher did everything in HIS power to work against the previous actually legitimately elected President of the United States. And no one deserved to be labeled “human scum” more than the current occupant of the Oval Office by the previous president. But somehow, President Obama managed to keep those monikers to himself.