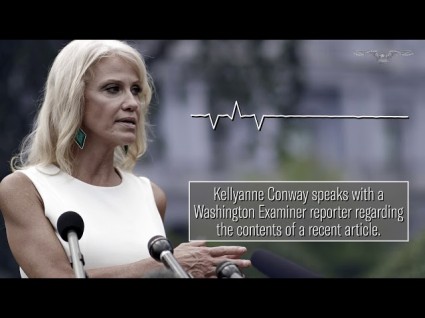 If you have seen Kellyanne’s interviews, you won’t be completely shocked at the way she is speaking to this reporter. She is known for being one of Trump’s most willing public liars, happy to debase herself in front of any camera willing to shine its lens in her direction. What is shocking to me is the level of anger she has in private – when she has no idea a recording will be heard.

The call is between Kellyanne and Caitlin Yilek, the breaking news reporter from the Washington Examiner. Kellyanne apparently did not like an article that Yilek wrote about Kellyanne possibly being floated as a replacement for living and breathing train wreck, Mick “Get Over It” Mulvaney. I guess Kellyanne did not like the article, because she was fired up and had her claws out, ready to attack.

Here is the transcript. Note how the FIRST thing she does was bring up her husband, and frequent Donald Trump critic, George Conway:

Conway: Hey, Caitlin. Kellyanne Conway. So I just am wondering why in God’s earth you would need to mention anything about George Conway’s tweets in an article that talks about me as possibly being chief of staff. Other than it looks to me like there’s no original reporting here, you just read Twitter and other people’s stuff, which I guess is why you don’t pick up the phone when people call from the White House because if it’s not on Twitter or it’s not on cable TV, it’s not real. I’m just wondering why you would have, A — why or what ever would give you the idea that I’m, quote, caught in the middle of some of these Twitter feeds and the president of the United States, B — who would be able to tell you that except for me? We’ve never talked, as far as I know.

Yilek: We have never talked. I did cite the Bloomberg News article. And the reason I didn’t pick up the call was because it said it was from Egypt, and I called it right back. In terms of mentioning George Conway, it’s relevant context.

Then Kellyanne calls her LAZY and insinuates that her other articles are useless and uninformative:

Conway: I know it’s just for clicks, but you’re going to have to give me, like, a journalistic reason here, especially if you admit that you just are repeating what another news source said and the president disputed that anyway. So, it’s sort of, like, doubly embarrassing. There’s no original reporting. If you’re going to call yourself a reporter, let’s see some reporting. There’s no original reporting, and then, it’s just lazy. Respectfully, of course, it’s just lazy to talk about somebody’s Twitter feed. Do you talk about other people’s spouses in your pieces, ’cause I’ve been looking around, I haven’t learned a single thing from any of your pieces, and I’m just wondering if you routinely talk about people’s spouses.

Yilek defends her mentioning George Conway, because it is relevant (AND IT IS)

Yilek: Uh, yes. My editor requires us to put in context about people’s families or spouses when it’s relevant.

Conway: Why is it relevant here? George’s position is what?

Conway: Uh, well, the president is supportive of me. You mean last March?

Conway: You mean seven months ago?

Yilek: If that’s when he last attacked George Conway, then yes.

Conway: You don’t know when that was?

Yilek: I don’t know the date off the top of my head.

Conway: Is this forever going to be relevant? You’re the, quote, breaking news reporter, is what it says here. And I’m just trying to understand what the breaking news was there.

Yilek: I’d be happy to have you talk —

Yilek: I would be happy to have you talk to my editor.

Then Kellyanne pulls the “I AM A POWERFUL WOMAN AND YOU MUST LISTEN TO ME, YOU LITTLE CHILD” card, which always comes across great. Oh, and she also emasculates her husband by saying he gets his power from her:

Conway: Um, yes, so, always, right, exactly. You’re really going places. Let me tell you something, from a powerful woman. Don’t pull the crap where you’re trying to undercut another woman based on who she’s married to. He gets his power through me, if you haven’t noticed. Not the other way around. And if these are the, quote, standards, unquote, at the Washington Examiner, then yes, I’d be happy to talk to your editor. But I’ve known your editor since before you were born. So, I can call your editor either way. I’m just trying to give you a chance to explain why you think what you wrote qualifies as breaking news or reporting.

Yilek: I don’t know that I have to explain that to you.

Conway: You don’t have to explain that you’re actually a non-reporting reporter?

Yilek: I’m just trying to do my job and what my editor tells me to do.

Yilek: Would you like to dispute that on the record? I would be happy to put that in my story.

Conway: Nobody read your story. I’m just making the point — I’m just asking you how you do your job, and you’re telling me you don’t have to explain yourself to me? And that this is what your editor asks you to do? I’m trying to decide what that is. Does your editor ask you to characterize other people’s feelings? Because that’s weird.

Yilek: Would you like to speak with my editor?

Then we get to “LET ME TALK TO YOUR MANAGER” Kellyanne:

Conway: Who is your editor?

Yilek: My editor is Jon Nicosia. I can also pass you onto our managing editor, Toby Harnden.

Conway: Oh, Toby, right. Good old Toby. [inaudible] I was just trying to ask you what it is that you’re doing as a breaking news reporter writing stories — you’re still not telling me what compels you to characterize my feelings in your story having never talked to me. So, you can answer that question without your editors. You don’t have to rely upon the men in your life and pretend somehow by way of reporting that I rely on the men in my life, which clearly isn’t the case. Do you think you could have written in there, first, only woman, first woman to run a successful presidential campaign. Do you think you could have described me as somebody who wears red a lot, or is a mother of four, who has been here from day one and has survived all these other people? Or maybe you have an obligation to tell people, well, as far as you know, I’m not a leaker, let alone the leaker, and [inaudible] we’ve never even had a conversation, including about my feelings. Any of these would qualify as reporting. Or, I could argue, breaking news.

Conway: When I was young and starting in my career, I was in the friend-making business. And I’ve worked super hard. You could have put that in paragraph two also. But I’m not caught in the middle of anything except trying to understand somebody whose title is breaking news reporter, what that means.

Yilek: Like I said, I’d be happy to pass you on to my editor, if you would like to speak with him.

Conway: I’d be [inaudible] to tell him you have no answer when asked why you were characterizing somebody’s feelings, having never talked to that person. If you have some psychology degree [inaudible].

Yilek: I don’t know that that is characterizing your feelings to say you are put in the middle if your husband and your boss are attacking each other.

Conway: When are they attacking each other? When did the president even mention his name?

Kellyanne Conway, a model for young girls about the exact type of women you should never aspire to be. It is one thing to want to be a strong, professional, intelligent woman. The key is to do so with kindness and compassion, not anger and virtiol. If you cannot manage that, no amount of status or money will ever make you truly successful.