News Corp is up in arms because Jacinda Ardern called Alan Jones a ‘git’ seven years ago. Of course, there’s more to the story…

In the latest example of a News Corp snoop-attack, New Zealand Prime Minister Jacinda Ardern has been revealed by Sky News to have called Alan Jones a “git” in 2012. What could have prompted this incendiary outburst? After all, September 30, 2012 — the date of the “slur” — is nearly seven full years before Jones said Ardern was a joke and a lightweight who should have a sock shoved down her throat.

Let’s have a quick look at what other politicians were saying on Twitter around the same time:

Yes, as it turns out, Ardern was not alone that day. Her comment followed leaked audio of Jones telling a group of Young Liberals that then-PM Julia Gillard’s late father had “died of shame”. It was the 2012 edition of an annual tradition: Alan Jones does something that would normally get somebody fired, his sponsors take a brave stance and walk (for about 18 minutes), and then everything returns to normal.

Sky’s report mentions that context, but The Daily Telegraph‘s write-up of the same story doesn’t refer to it at all. This is perplexing, because, at the time, the Tele thought it was a big enough deal to run possibly the best excoriation of Jones that followed.

Former editor David Penberthy witheringly wrote Jones was “demanding respect and fairness when he has displayed little, claiming victimhood when he has engaged in an act of victimisation which even by his standards sets an abysmal new low”.

Penberthy stopped just short of calling for Jones to be fired, but suggestively said anyone “with a pinch of decency” should deny Jones the loyalty he demands. 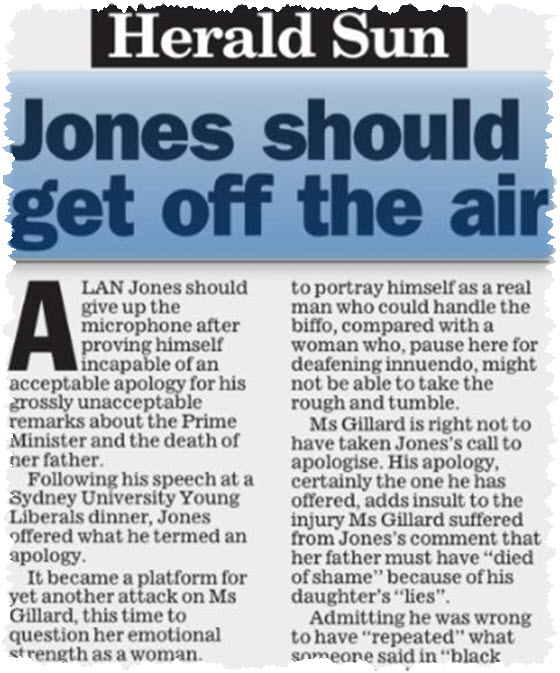