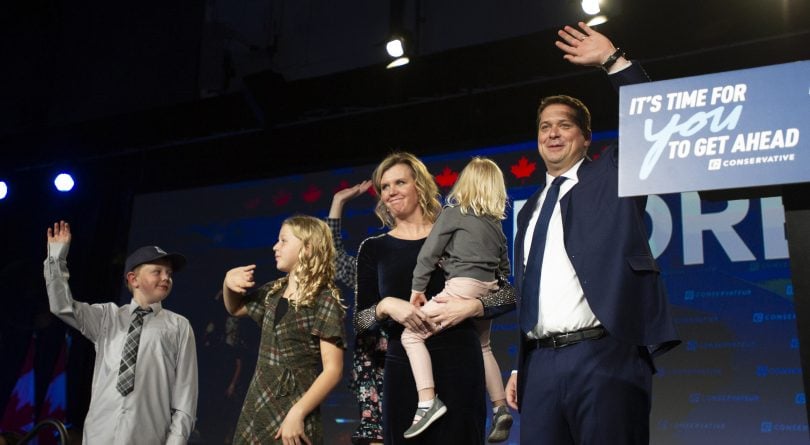 Doors opened at Conservative HQ in Regina a half-hour before polls closed in central Canada, with the party far behind in early returns. Supporters shuffled into the hall quietly, like moviegoers entering the theatre after the previews had begun. They hoped the big screens gave them something, anything, to cheer for.Not tonight. Not this year. As CTV became the first English network to declare Liberal victory, the Regina crowd watched another station to holler for their team leading in Maxime Bernier’s seat. A few minutes later, CBC called it, and as hologram Justin Trudeau strode onto the screen, the TVs switched over? to Global, the last network to declare for Justin Trudeau.In the hours before polls closed nationwide, Conservative aides made one confident prediction: that only one national party would gain seats tonight, and it would be them. Which is a flex, of sorts, but it’s like predicting a podium finish in a first-past-the-post election.Reality gave the Conservative results-watching crew few reasons to raise aloft the “Scheer 2019” signs on their seats, or to don the free blue-and-white “C” hats on their chairs. Sure, they cheered and sign-wagged when Scheer won his Regina seat, or chanted “na na na na, hey hey, goodbye” when local Liberal veteran Ralph Goodale conceded. And Scheer’s two incoming Regina MPs addressed the crowd as feel-good warm-up acts to the Opposition leader. Some scenes were thrilling. For this audience, the movie sucked. Thanks to the Courtesy of :