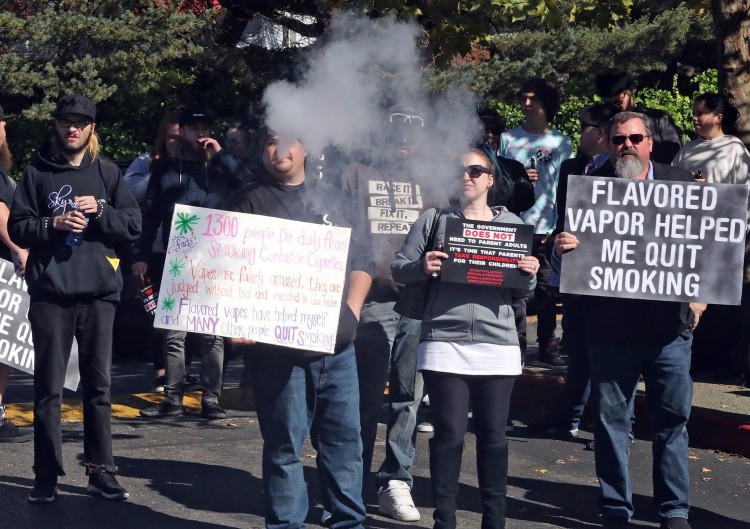 Legislative momentum continues to build for action against vaping in the wake of highly publicized deaths and illnesses vaguely attributed to the industry. Desperate to appear responsive to a purported public-health crisis, states including New York, Michigan, Washington, Massachusetts, Oregon, Rhode Island, Ohio, and California are moving to ban sales of certain e-cigarette products or have done so already. The legislative target has already moved subtly from black-market cannabis poisoning — the most likely culprit for these deaths — to the unrelated and heavily hyped “youth flavor-vaping epidemic.” Some cities have already banned flavored e-cigarettes.

This is an extraordinary overreaction, and one that, if not checked, will result in serious harm to millions of people looking to quit smoking. Why are governments — federal, state, and local — so eager to line up against vaping? Some perspective is in order.

About a decade ago, the development of e-cigarette technology — vaping, as it has become known —offered a revolutionary opportunity for smokers looking for a way out of their habit: a battery-powered device heats up a liquid mixture of propylene glycol, vegetable glycerin, flavoring, and nicotine to deliver nicotine to a user without the carcinogenic baggage of combustible cigarettes. This method of nicotine replacement allows the user to get the same behavioral experience as smoking without as many of the health consequences.

Studies about the invention soon followed. Public Health England, the same entity that warned the world that cigarettes caused cancer, determined that using an e-cigarette was at least 95% safer than smoking a traditional cigarette. E-cigarettes are sold in hospitals throughout England to help smokers quit. A study in the Journal of the American Medical Association found that “Use of e-cigarettes appears to be associated with exposure to known tobacco-related toxicants, but the exposure is reduced compared with cigarette smoking.” Smokers were willing to accept this risk to get themselves off a deadly product that kills 7 million people worldwide every year and is known to cause cancer, heart disease, and lung disease.

Still, almost from the outset, a coalition of public health advocates, concerned parents, and federal bureaucrats led the charge against the e-cigarette industry. And now these groups are trying to blame nicotine-based, flavored e-cigarettes for the recent “lung crisis,” though little evidence exists that such e-cigarettes are making people sick. Rather, the incidents can be credibly tied to illegal, black-market THC (marijuana) cartridges. Yet the CDC has failed to demand that all patients presenting with this mystery lung disease be urine-tested for THC. Instead, the CDC’s main message is, “Stop vaping.” The result: a high-profile panic among a public already concerned by the CDC-hyped “youth vaping crisis.” The public-health advocacy industry, along with government health agencies and, more recently, the President of the United States, have seized the opportunity, deciding that the solution to the “crisis” is to ban or restrict flavored e-cigarettes.

They’re way off target in these efforts: legally purchased, flavor-based nicotine vapor isn’t likely responsible for the lung damage being seen in emergency rooms. In fact, flavor-based nicotine is responsible for millions of people quitting a deadly tobacco habit that they were unable to kick using the government’s preferred methods over decades.

E-cigarette users wonder how their experiences can differ so much from what government officials and health advocates are telling the public. “I smoked for 41 years, and I spent 30 of those years trying to quit,” says Mark Slis, who runs a vape shop in Michigan. “And it was 100% due to the flavors.” He estimates that he has helped 1,000 people quit smoking — and that virtually all his customers use the flavored e-cigarettes. If the state’s flavored-vaping ban goes into effect, he’ll go out of business. And in Michigan, the ban’s terms are punitive — violators could face prison terms up to six months.

The Vapor Technology Association has filed legal challenges to some of these state bans, but it’s an uphill battle. Unless flavored nicotine-liquid products gain CDC approval — after a multimillion-dollar application process — the agency is due to move against them. And though a federal agency like the CDC doesn’t have the authority to ban flavors formally, it doesn’t have to — all it needs to do is make the barrier to entry punitively high, and the small businesses that make up the vapor industry will disappear. This will effectively push people back to deadly cigarettes, or to finding flavors on the black market.

Tonya Burgess, a 24-year-old Indiana resident who started vaping two years ago, thinks that the government attacks on vapers will encourage people like her to return to smoking. “I spent my whole life trusting the government,” he says, “and now I’m wondering, what’s going on?”

Many people like Slis, his customers, and legions of other vapers who have been helped by this technology now regard government health agencies with distrust, since they can’t understand why officials would want to take away such an effective tool against smoking addiction.

“I do not trust the CDC. Not anymore,” says Michigander Debbye Saladine-Thompson — a nurse, 32-year-long former smoker, and volunteer for Consumer Advocates for Smoke-Free Alternatives Association. “I cannot trust an agency that says the product that I and so many people have been using for 10 years and hasn’t caused one death is now causing hundreds of illnesses. No, I do not believe that.”

Adding to the frustration is that the vaping community’s effort to collaborate with legislators to address public concerns are spurned or ignored.

“The vaper community here wants to work with our legislators and regulators, we want to be good stewards of the industry, which we have shown, but we must be given the chance to do so,” said James Jarvis, head of the Ohio Vapor Trade association, at a recent pro-vaping rally. “We urge Gov. [Mike] DeWine and legislative leaders to learn about our industry, to understand the role flavors play and understand vape stores are not the ones selling to minors.”

Clearly, the forces aligned against vaping — many funded by the government and anti-vaping business interests — do not want this choice available to smokers. Why?

It sure seems like the government makes more money from smoking than the tobacco companies — and that it would have a sizable incentive in ensuring that enough Americans continue smoking.

This is a story of how a community of innovative and dedicated people created a life-saving, harm-reducing health product — only to see a cynical federal government, greedy politicians, and a public drunk on media-generated moral panic attempt to stomp it out. Vapers face powerful opposition, but they have some forces of their own: at least 9 million adults now use nicotine based e-cigarettes, and 10,000 small businesses, with 90,000 employees, work in the orbit of the vaping or e-cigarette industry—and they’re starting to organize themselves. How will this struggle play out? Perhaps we will find out at the ballot box.

Elizabeth Sheld is the senior news editor at American Greatness and author of the “Morning Greatness” news update. She is a veteran political strategist and pollster who has worked on campaigns and public interest affairs. Liz has written at Breitbart and The Federalist, as well as at PJ Media, where she wrote “The Morning Briefing.” In her spare time, she shoots sporting clays and watches documentaries. Elizabeth quit smoking with Cuttwood Vapor’s Unicorn Milk.