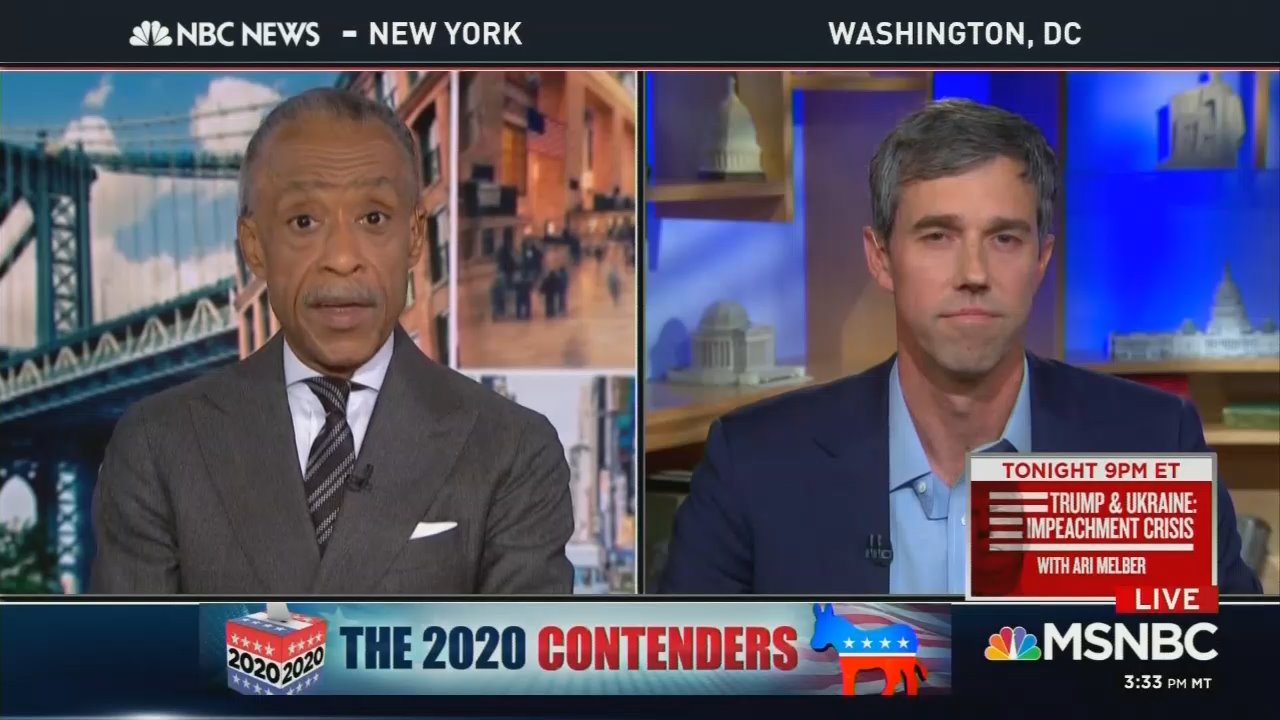 While interviewing 2020 presidential candidate Beto O’Rourke, PoliticsNation host Al Sharpton failed to push back on the far-left Democrat when he compared the Trump administration to the Third Reich. O’Rourke had free rein to compare the President to Hitler’s minister of propaganda, Joseph Goebbels. All the while, Sharpton, well-known for making incendiary remarks himself, allowed him to filibuster.

Sharpton asked O’Rourke “how do you deal with what is clearly a…empty five-day cease fire commitment from Turkey to Secretary Pompeo and Vice President Pence when we’re seeing actual fighting going on?”

O’Rourke responded with that ugly comparison: “President Trump, perhaps inspired by Goebbels and the propagandists of the Third Reich, seemed to employ this tactic that the bigger the lie, the more obscene the injustice, the more dizzying the pace of this bizarre behavior, the less likely we are to be able to do something about it.”

Sharpton then asked: “Did I hear you correctly say that perhaps he was influenced by Goebbels and the Third Reich in terms of telling a big lie? I just want to make sure that’s what I heard you say.”

Rather than push back, Sharpton merely observed that “you clearly said it’s Third Reich and like Goebbels” before switching topics. Just like on Meet the Press, it looks like Democratic candidates can count on PoliticsNation as a “safe space” where they can count on favorable treatment along with little-to-no pushback on their most outrageous commentary and ideas.

O’Rourke’s appearance on PoliticsNation should not have come as that much of a surprise; after all, kissing the ring of Al Sharpton has become a rite of passage for Democratic presidential hopefuls. Still, O’Rourke’s decision to associate himself with the divisive Sharpton, as well as his comparison of the Trump administration to The Third Reich, raises questions about just how much those on the left really care about unifying the country.

A transcript of the relevant portion of Sunday’s edition of PoliticsNation is below. Click “expand” to read more.

AL SHARPTON: Joining me now is another 2020 candidate, former Texas Congressman Beto O’Rourke. Welcome back to PoliticsNation, Mr. O’Rourke. First of all, your thoughts on how the impeachment inquiry will impact the Democratic race for the nominee.

BETO O’ROURKE: It is so important that the country, through our representatives in Congress, focus on holding the President accountable and bringing him to justice. Otherwise, we’re going to set this precedent that some people, because of their power or the position of public trust that they hold, are above the law. So, though it might complicate things in the presidential race and in our elections and in the polling, it’s…it’s the best thing that we could be doing. In fact, it’s a very necessary thing if we’re going to save this republic and hold Donald Trump accountable. So, regardless of the politics, I’m grateful for those members of the House that are working on this and even some Republican members who are beginning to show signs of courage to say the right thing, call what the President is doing by its right name; a quid pro quo is what Representative Rooney from Florida, a Republican member, just said over the last couple of days. And then we hope that those Republican Senators have the courage of their convictions, put this country over their party, and save this democracy while we still can. So, it’s the right thing for us to be focused on.

SHARPTON: So, you don’t buy into those that say that the impeachment inquiry could overshadow or take too much oxygen out of the room from the presidential campaign, you say that this is a matter of principle and it’s a matter of saving the country?

O’ROURKE: That’s right. I…I would probably concede the point, as a candidate who…who’s seen this, that it’s much harder to…to break through, to become part of the conversation, when we are gripped in the drama of a Constitutional struggle; and yet, that struggle for the Constitution, ensuring that we can preserve this republic and pass it on to our kids and grandkids, that should take precedence over anything else because any challenge that we want to meet on…on health care or criminal justice or rewriting our immigration laws or confronting climate change only becomes possible if this great democracy still works. And it is under attack right now unlike any time in our lifetimes and we’ve got to be up for this moment and make sure that we overcome this challenge. And I think everything else, including the politics, will work themselves out.

SHARPTON: Now, how do you view the President…two-part question here. How do you view the President reversing on saying he’s going to have the GC…G7 conference at his hotel and resort, the Doral in Florida, now he’s saying he will not, and how do you deal with what is clearly a, in my opinion, empty five day cease fire commitment from Turkey to Secretary Pompeo and Vice President Pence when we’re seeing actual fighting going on?

O’ROURKE: You know, President Trump, perhaps inspired by Goebbels and the propagandists of the Third Reich, seemed to employ this tactic that the bigger the lie, the more obscene the injustice, the more dizzying the pace of this bizarre behavior, the less likely we are to be able to do something about it. And so, I’m so grateful that not only is the House moving forward with impeachment, but that the public really began to rise up when the President sought to enrich himself by hosting the G7 summit at one of his own properties. This administration, rife with corruption, is finally coming to a reckoning with the public will of this country. So, I think it’s a good sign that he was caught, that he was stopped, that he can no longer normalize the behavior that we’ve seen so far. When…when it comes to Syria, this is just one of the most tragic, embarrassing moments in American history; to…to turn our backs on our allies and Reverend Sharpton, I heard what you said earlier. The…these Kurdish fighters literally laid down their lives for this country and made it possible for us to send fewer U.S. Service members over there to do the job of defeating ISIS and protecting our interests. So, not only have we dishonored that commitment, we’ve made it far less likely that we will be able to bring other potential allies in the future to our cause and to fight alongside U.S. Service members. We’ve got to correct this injustice as soon as we can and re-establish the stature and standing and security of the United States on the global stage.

SHARPTON: Did I hear you correctly say that perhaps he was influenced by Goebbels and the Third Reich in terms of telling a big lie? I just want to make sure that’s what I heard you say.

O’ROURKE: That’s right. There is so much that is resonant of the Third Reich in this administration. Whether it is attempting to ban all people of one religion and saying that Muslims are somehow inherently dangerous or de…defective or disqualified. Outside of Nazi Germany, it’s hard for me to find another modern democracy that had the audacity to…to say something like this. And then this…this idea from Goebbels and Hitler that the bigger the lie and the more often you repeat it, the more likely people are to believe it, that…that is Donald Trump to a T. The things that he says about immigrants committing crimes, being rapists, being predators and animals, seeking to dehumanize them, that’s how we get them in cages, that’s how we lost the lives of seven children in our custody and care, talking about African-American women duly elected by their constituents as somehow being less than American and telling them to go back to their own country or calling white supremacists and neo-Nazis and Klansmen very fine people, the signal that he is sending is being picked up Americans who are willing to work on that hatred and racism. And Reverend Sharpton, we saw it brought home to us in El Paso on August 3, when someone repeating the Presidents’ own words in his manifesto, opened fire on people in El Paso, Texas, killing 22 of them in a Walmart on the Saturday before school started that next Monday. So, this is the cost and consequence of Donald Trump.

SHARPTON: All right. You clear…clearly said, it’s Third Reich and like Goebbels. Let me go to another issue. You visited this week the family of Atatiana Jefferson, who was killed by a policemen in…in Fort Worth, Texas; a case that I’m certainly watching and interested in. Tell us about the…the experience and tell us why you decided to go because I was a little disturbed that only Castro brought this shooting up at the debate as I just brought to Senator Booker.

O’ROURKE: A week ago, Tay Jefferson was with her eight-year-old nephew in the bedroom of her own home; when she was shot by a white police officer through her bedroom window. And…and as you well know, this is the second time a black person has been shot in the larger North Texas community by a white police officer in their own home. Botham Jean, shot last year, killed last year by Amber Guyger. And…and what Ashley and Amber, Tay’s sisters, told me and…and it really got me is they said, look, Tay was not out, she was not at a friend’s home, she wasn’t doing anything to anyone. She was in the one place that should be safe for any human being, any American, and it was there that she was killed. And…and…and Amber and Ashley said we…we just do not feel safe literally anywhere anymore. And…and for those in this country to feel fear from those who are sworn to serve and protect everyone in this country, shows you just how dangerous America is for black women and black men today and unless there’s accountability, unless there is justice, this is going to continue to happen in America. So, I am very grateful to Amber and Ashley for meeting with me, to Lee Merritt, who both represents this family and represented the family of Botham Jean, who’s trying to bring light and justice to this situation so we don’t continue to visit the same kind of injustice on future generations. This absolutely has to stop.