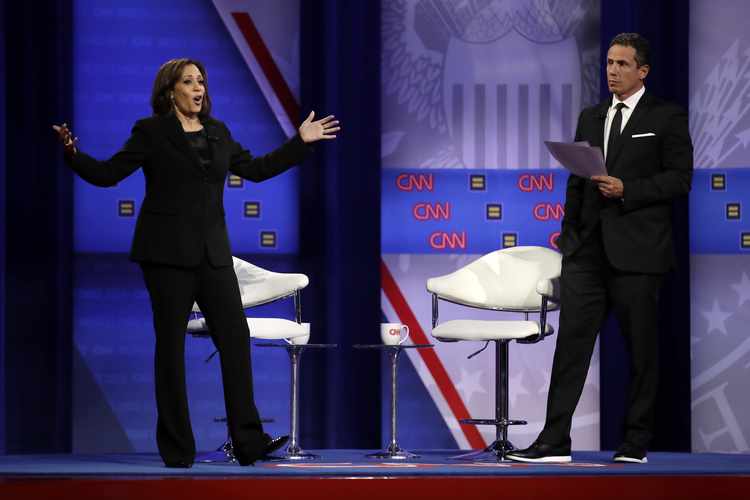 It was an awkward lesson in the new progressive grammar of the left.

Sen. Kamala Harris walked on stage at the LGBTQ Town Hall hosted by the Human Rights Campaign and made an introduction. “Thank you, guys,” the California Democrat told the audience. “My pronouns are she, her, and hers.”

That is when the crowd went wild, and when Chris Cuomo stepped in it. “Mine too,” the CNN host joked. The crowd did not like it. Neither did Harris, who replied curtly, “All right.”

But that wasn’t the end for Cuomo. Progressive outrage poured down on Twitter, and he was forced to issue an apology a day later:

“PLEASE READ: When Sen. Harris said her pronouns were, she her and hers, I said mine too. I should not have. I apologize. I am an ally of the LGBTQ community, and I am sorry because I am committed to helping us achieve equality. Thank you for watching our townhall.”

The problem, some would argue, was that Cuomo is a white straight man. His preferred pronouns are not feminine; they are the masculine he, him, his — a lower classification on the ziggurat of the left’s protected classes. By casually cracking a joke, Cuomo had come dangerously close to bigotry, even homophobia, a serious offense for a journalist covering what could become the presidential primary of gender identity.

Like the prerequisite to support same-sex marriage in 2016, Democratic candidates seeking the nomination in 2020 are now expected to embrace liberal gender theory and the corresponding inclusive pronouns.

But first, a grammar lesson from the updated textbook of sexual orientation and identity: “He” is the masculine third-person, singular personal pronoun that attaches to Cuomo. But if Cuomo were not a white straight male — if he were a member of, say, the transgender or gender queer community, he could choose an entirely different set of pronouns.

A transgender Cuomo might adopt the pronouns she, her, and hers, while a non-binary Cuomo could identify with the plural they, them, theirs. Or he could choose any combination of up to 30 different pronouns.

This is the new frontier, and there are new rules, according to the pioneers breaking new ground.

“It is a best practice for campaigns at every level from presidency to state representative to city council person,” Human Rights Campaign National Press Secretary Lucas Acosta told RealClearPolitics. Identifying personal pronouns is important, Acosta explained, because “presentation does not always match orientation”; for instance, an individual who looks like a man could identify as a woman.

Pronouns are important to the entire LGBTQ community, he said, but especially “for gender-non-binary and transgender people, when you affirm your pronouns at introduction, you’re telling people how to acknowledge you and when they acknowledge your pronouns correctly, that then shows respect for you and your identity.”

The HRC offered this tutorial to several 2020 campaigns ahead of the televised town hall. And the candidates took it to heart: Six of those who appeared on stage at the last Democratic debate went public with their pronouns.

Mayor Pete Buttigieg uses he and him. The openly gay mayor of South Bend, Ind., has included the pronouns in his Twitter bio next to a helpful guide for pronouncing his last name (“BOOT-edge-edge”). Massachusetts Sen. Elizabeth Warren goes by she and her, as does Harris. Sen. Cory Booker of New Jersey identifies as he and him. So do former Housing and Urban Development Secretary Julián Castro and billionaire political activist Tom Steyer.

President Trump certainly goes by he and him, but a RealClearPolitics request to his campaign asking about preferred pronouns went unanswered.

All of this is new to campaigning. When Barack Obama ran for president the first time, he was asked about his stance on gay marriage, not his personal pronouns. (He only supported civil unions at the time.) One presidential campaign veteran of that era, a Democratic staffer speaking on condition of anonymity, said that gay issues were often a private topic relegated to high-dollar fundraisers in New York City and Hollywood, not out in the open on the campaign trail.

But little more than a decade later, the LGBTQ community has become an even more potent political force and its issues have become marquee. Part of that is due to shifting public opinion. Another part stems from a crowded primary field.

When more than a dozen candidates compete for the nomination, slicing and dicing and spreading out the electorate, subset voter blocs take on more clout. Democratic candidates are so aggressively courting the gay vote, Acosta said, that the Iowa Pride Festival “was basically a cattle call for candidates.” Anyone who didn’t show up was “the odd man out this cycle.”

The HRC has put campaigns on notice, declaring that “the 2020 Democratic Primary has cemented the LGBTQ vote and our pro-equality voting allies as a force to be reckoned with and a constituency to court.” And the organization has developed voting maps in each of the early voting states to show how many votes are up for grabs.

But what might work in a progressive primary may trigger backlash in a general election where a national electorate is still coming to grips with changing social norms. Progressive grammar is a matter of polite manners on the coasts; elsewhere, not so much. A voter in Wisconsin, Michigan, or Pennsylvania may not even be familiar with gender-identity pronouns, while businesses in Washington, D.C., and New York City could face thousands of dollars in fines if they run afoul of new standards.

This makes some Democrats nervous, especially the ones who thought Hillary Clinton lost the Midwest — and therefore the last general election — because she allowed voters to think she cared more about transgender bathrooms than the Rust Belt economy.

This was the postmortem diagnosis of Youngstown, Ohio, Democrat David Betras.

“It doesn’t matter how much we scream and holler about jobs and the economy at the local level. Our national leaders still don’t get it,” the chairman of the Mahoning County Democratic Party said two months after Inauguration Day. “While Trump is talking about trade and jobs, they’re still obsessing about which bathrooms people should be allowed to go into.”

Ohio could decide the next election and, while Betras has stepped down from his post, he still sees the same problem. It isn’t that LGBTQ issues don’t matter, he told RCP. It’s that Democrats aren’t focusing on the electoral meat and potatoes needed to win the heartland.

“What the Democrats in California and in New York need to realize is that it doesn’t matter how many votes we get in California or New York,” Betras said before “going out on a limb” and predicting that those strongholds would stay blue. “But that doesn’t get us to the promise land. What gets us there is fly-over country.”

Voters in Youngstown, and hundreds of other de-industrialized places like it, care more about stagnant wages than woke signifiers of sexual orientation, according to Betras. They care less about what happens in the bedroom than in the workplace — that is, if the local factory hasn’t been boxed up and shipped overseas.

The whole election boils down to identifying what matters most to voters, said Betras, who didn’t give his preferred pronouns. He also didn’t discount that LGBTQ issues are important. Instead, he accused Democrats at the national level of serving up “a big dish of broccoli” at a moment when “a megalomaniac is putting steak in the middle of a trash can lid.”

The vegetables are social issues. The steak, a promise of better jobs and a roaring economy. If Democrats don’t talk almost exclusively about winning kitchen-table issues — i.e., the economy and health care and pensions — Betras said, Trump will win.

When Democrats talk about gender-identity pronouns — something Betras doesn’t disagree with — they run the risk of conveying to heartland voters that a new and evolving standard of progressive social justice is more important than jobs. Voters, he continued, will be insulted: “I don’t know what else to say — and that doesn’t make me transphobic; that makes me reality-based.

“What I want to say to the transgender community is that we can’t protect your rights if all we are talking about is your rights,” he said. “You’ve got to win. We are in a zero-sum game: Either we win, or we are holding our ass in our hand.”

Come next November, voters will walk into voting booths where candidates have little R’s and D’s next to their names, not preferred gender pronouns. The nation has rapidly accelerated on social issues. Whether that change translates into electoral success for the left remains to be seen.

Still, norms are changing, even if the current occupant of the Oval Office doesn’t after 2020.

“The country has come so far in so little time; it is one more thing people will need to learn,” the HRC’s Acosta said. Eventually, he predicted, “the American public will get to a place where this becomes commonplace.”