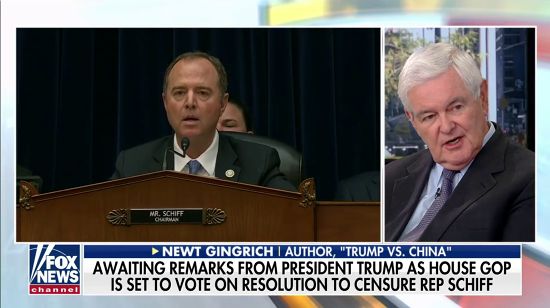 The man who might be single-handedly responsible for breaking Congress sat on the Outnumbered couch yesterday and said that Rep. Adam Schiff has “lost his mind.” Former Speaker of the House, Newt Gingrich joined the ConservaBarbies plus Jessica Tarlov on the show, and Lisa Boothe brought up the attempted censure of Adam Schiff. The resolution to censure was over Rep. Schiff’s parody take in his opening statement last month of Trump’s phone call to Ukraine’s President Zelensky. They flailing GOP also claim Schiff lied about whether or not he had spoken to the whistleblower. Whatevs. Lisa Boothe asked Gingrich for his take.

BOOTHE: Why do you say that?

GINGRICH: You’re the chairman of the Intelligence Committee. Your greatest credibility is that you know all sorts of things that other people do not know. To the more sober you are, the more realistic you are, the more disciplined you are, the greater your respect and the greater your authority. And by opening up this hearing by reading something which he claimed initially was what trump had said in the phone call, and then admitted that it was total fiction then he made up, I think that it was remarkably self-destructive.

The thrice-married man who led an impeachment against President Clinton for cheating in his marriage while he, himself was cheating on his own wife, is talking about respect, sobriety, and admonishing Rep. Adam Schiff for being self-destructive. Got it.

Then Gingrich endorsed the notion that the whistleblower’s identity should and shall be revealed.

BOOTHE: How much does it undercut Democrats’ attempts with the impeachment inquiry?

GINGRICH: I think when Senator Sasse described all of this is kind of the equivalent of a circus clown show, it gave you this sense of what is happening in the Senate, where a lot of the Republicans are alienated from thinking about it, because the Democrats in the house are handling it so badly. The whole idea that you can have somebody in a secret meeting suggesting that the president of the United States, the people’s choice, ought to be impeached, the American people should be repudiated, and you think that name is not gonna come out?

So, there’s Gingrich’s fascist side coming out. Whistleblowers deserve no protection, and impeachment should not be happening because the initial claim came from a whistleblower. Never mind all the confirming evidence we’ve had in plain sight since then, much of it right out of Trump’s own mouth.

Boothe tried once more to make it sound like Schiff was trying to create a false narrative, rather than merely being sarcastic in his remarks. Jessica Tarlov made mincemeat of that BS, listing all the valid evidence there is for impeachment, then turned to address the topic of GOP hypocrisy. She even dared to ask that nuclear question that no Republican is able to go near…

TARLOV: But there is something dishonest going on here from the Republicans. They’re gonna sign this measure to censure Adam Schiff, but they go on TV all the time, the president’s defenders, like Devin Nunes and Jim Jordan and Mark Meadows and say, this is unprecedented. They are holding these hearings in secret, but you, Mr. Speaker, know better than anybody, having been integral in an impeachment before, that there are special counsels for the Clinton impeachment and for Nixon. Archibald Cox and Ken Starr. So there were months of fact-finding missions that went on behind closed doors to get information before it actually got to the committees. Adam Schiff is working right now without a special counsel report, and he has made it perfectly clear that what they are doing is to ensure that witnesses who are going to be coming from the committee do not hear what the other one is saying. I don’t see how he can do it any other way?

GINGRICH: This is insane… first of all, the other two were independent counsels, so was Robert Mueller.

TARLOV: But that has nothing to do with the impeachable offenses on the table right now.

NEWT: No, but if they wanted to they could have called for an independent counsel about Ukraine, they did not want to. They’re operating on Nancy Pelosi’s timeline driven by AOC and “The Squad” to do something to go after Donald Trump.

TARLOV: You have no problem with President Trump asking a foreign power to dig up dirt on his opponent? And withholding aid? Do you have a problem with it? That it’s an abuse of power?

GINGRICH: First of all, the whistle-blower knew nothing. Had no firsthand knowledge. None.

TARLOV: That’s not true. The DNI said that he spent two weeks doing that and confirmed it.

Sigh. It’s a valiant effort, Tarlov. Truly, I don’t know how you take it for the team so regularly. Regardless, it was for naught. Poor Newt’s pathetic scrambling was in vain, as of course, by now that censure is long gone. Dead, gone, soundly defeated in the ash heap of embarrassing Republican attempts to please the fascist squatting in the White House.