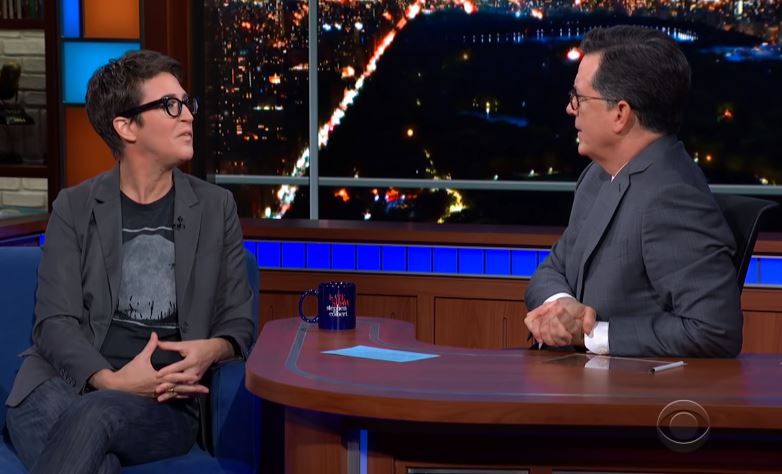 New York Times media reporter John Koblin made the front page of Monday’s Business section with “As News Drives Late Night, Anchors Join A-List,” which snuck in ideological bias and promoted MSNBC host (and Russia-gate obsessive) Rachel Maddow with a photo of her as a guest of late-night host Stephen Colbert.

Yet again, The Times promotes and celebrates the mere fact of liberals talking to liberals, with the anti-Trump ideological content unacknowledged, while liberal Times readers experience the joy of raeding about their left-wing heroes sitting on both sides of the host desk:

The formula for success on the big late-night network television shows used to be simple. Keep it light, keep it moving and book a major star, preferably one in the news.

Now, with impeachment in the air and the 2020 presidential campaign underway, the shows that do best are the ones that don’t shy away from politics — and the guests who deliver big ratings are political figures and news commentators.

“The Late Show With Stephen Colbert” on CBS, the most-viewed late-night host since 2017, had one of its biggest episodes of the year recently, when the first guest was the MSNBC host Rachel Maddow.

In a less fraught time, a journalist discussing the news of the day would not be much of a ratings winner, but 4.6 million people watched the “Late Show” episode in which Ms. Maddow and Mr. Colbert talked about President Trump, Ukraine and the impeachment inquiry, according to Nielsen.

Koblin skipped the pro-impeachment content of the episode in question, which aired in early October (and documented by NewsBusters). Keeping Maddow in the news is a long-standing priority of The Times (and Koblin), with media reporters regularly praising any uptick in her ratings, often something boiled down to how she’s always catching up to Fox News…even though she’s never actually there). After Russia-gate fizzled, her ratings plummeted. But the paper ignored the drop. Bad news for Maddow is not news at The Times.

Mr. Colbert also trounced the competition the night before the Maddow interview, attracting 4.5 million viewers with Hillary and Chelsea Clinton. The audience for that episode, too, was greater than the combined total for the shows hosted by Mr. Fallon and Mr. Kimmel.

In the 11 o’clock time slot, the politics-heavy “The Daily Show” on Comedy Central, hosted by Trevor Noah, regularly beats its TBS competitor, the mostly Trump-free “Conan.” But even Conan O’Brien has adjusted to the new landscape, selecting shoot locations for his occasional travel show, “Conan Without Borders,” based on news events.

Mr. O’Brien took the program to Haiti after Mr. Trump disparaged that country, speaking with schoolchildren there about how the presidential insult made them feel. More recently, he traveled with his camera crew to Greenland after Mr. Trump floated the idea of buying it.

But Mr. Corden’s rival Seth Meyers, the host of NBC’s “Late Night With Seth Meyers, ” drew more total viewers in the 2018-19 season thanks to a formula that had him devoting the first 20 minutes of his show to the latest on Mr. Trump….

Fox News does the same thing from the reverse angle, and is mocked. But there’s nothing risible when liberals to curl up in front of Trump-mocking comfort food on late night television.