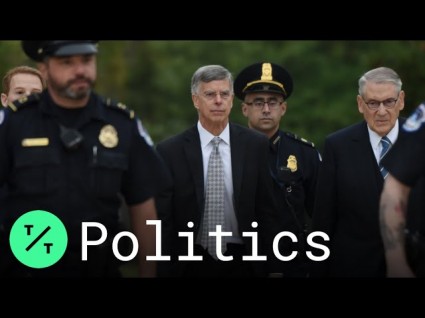 Here’s some of what we’ve learned from the statement Ambassador William Taylor made to congressional investigators today. The entire statement is embedded below.

By mid-July it was becoming clear to me that the meeting President Zelenskyy wanted was conditioned on the investigations of Burisma and alleged Ukrainian interference in the 2016 U.S. elections. It was also clear that this condition was driven by the irregular policy channel I had come to understand was guided by Mr. Giuliani.

He decribes his slow realization that there was both a regular and an irregular policy channel — the latter, made up of Trump’s donor Sondland and Rudy Giuliani.

Wow. From Bill Taylor’s statement: “Ambassador Sondland tried to explain to me that President Trump is a businessman. When a businessman is about to sign a check to someone who owes him something, he said, the businessman asks that person to pay up before signing the check.”

Sondland told Taylor he made a mistake earlier by telling the Ukrainian’s that a WH meeting with Zelensky “was dependent on a public announcement of the investigations.”

“In fact, Sondland said ‘everything’ was dependent on such an announcement, including security assistance.”

Based on the reporting below on the statement of Bill Taylor, my prediction is that some Republicans will now say quid pro quo is okay. And then they will lose their last shreds of integrity. https://t.co/kzzsNUrPp5

Envoy Sondland is in for a restive night of contemplating whether he prefers prison or reversing himself and turning on Trump.

.@RepJerryNadler just asked each witness in the @HouseJudiciary hearing on Election Security whether it was appropriate for a president to ask a foreign country to investigate a political opponent.

The witness who refused to answer was from DOJ.