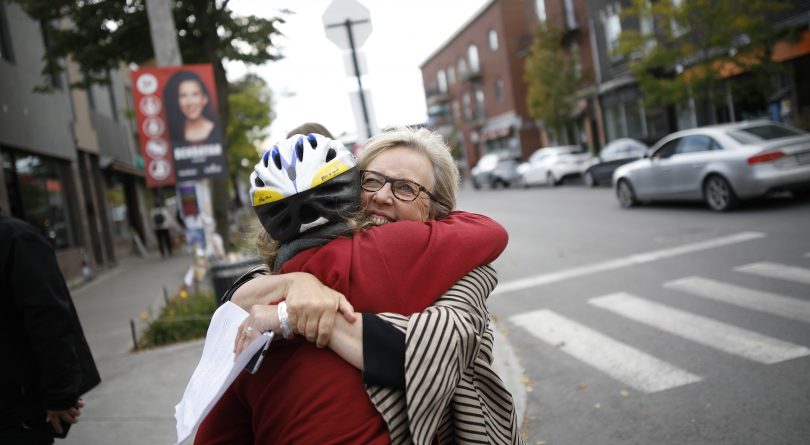 b“Mother Earth is here,” a Green party supporter declared as Green Leader Elizabeth May walked into the Crystal Garden, at the Victoria Conference Centre, before election results for most of the country started to flow on election night. A spirit of jubilation reigned at the time. Green candidate Jenica Atwin had just been declared the winner in Fredericton, a formerly Liberal riding. It was a big breakthrough: the third Green MP elected, and the first elected beyond Vancouver Island. The island was seen as ground zero for Green party gains this election but, as the evening progressed, hoped-for wins didn’t materialize. The Greens reclaimed the two seats they’d held of the island’s seven: May handily won Saanich—Gulf Islands, the riding she has represented since 2011; Paul Manly won more narrowly in Nanaimo-Ladysmith, where he’d prevailed in a by-election earlier this year. The five other ridings were won by the NDP. John Kidder, May’s husband of six months, placed fourth in Mission—Matsqui—Fraser Canyon, a riding won by Conservatives. This federal election was supposed to be the Greens’ breakout. The portents were there—hundreds of thousands of Canadians marching in climate strikes to protest government inaction, inspired by 16-year-old Greta Thunberg and a world melting, burning and flooding. In 2018, the UN Intergovernmental Panel on Climate Change (IPCC) warned that governments had 12 years to cut carbon output significantly; a 2019 federal government climate report warned that Canada is warming twice as fast as the global average. Provincial Greens were making breakthroughs—in B.C., where they hold the balance of power; in P.E.I., where Greens form the official opposition; and in Ontario and New Brunswick—inroads that directed the Greens’ federal campaign. Spirits were so high, the prospect of the Greens eclipsing the NDP was even floated. April numbers from EKOS pollster Frank Graves saw the Greens ahead of the NDP for the first time in 20 years: “Greens were at 14 with the NDP 1.5 points back,” Graves told Maclean’s, noting his previous polling never saw the Greens higher than 10 per cent.READ: The climate wars will be waged in middle-class living roomsBut an election May called a “referendum on the climate crisis” would in fact train a spotlight on the political obstacles the nation faces in addressing it. Climate was predicted to be a key electoral issue, but discussions about keeping global temperature to 1.5 C warming were scant. The race was riddled with false information, scare tactics, negativity and scandals big and small. The Greens weren’t exempt. The party had to dial back a party spokesperson’s comment that national unity wasn’t a “core value.” A Green staffer digitally altered a plastic, recyclable cup May held in a photo with an eco-friendlier Green party mug: “It was stupid,” May says. May would be the lone climate Cassandra, proclaiming that Canada had to reduce greenhouse gas emissions to 60 per cent below 2005 levels by 2030 to prevent runaway global warming, double what the Liberals and NDP proposed. The Liberals presented themselves as climate champions, but, as May repeatedly reminded voters, they had kept the Harper government’s climate targets, broken a promise to end fossil fuel subsidies, and spent $4.5 billion on the Trans Mountain Pipeline. The Conservatives’ climate policy was non-existent; it promised to scrap the carbon tax, would increase CO₂ emissions, and had no stated targets.May uttered her complaints when she had the mike, which wasn’t often, given the media focus on the familiar Big Three throughout the campaign. May, who had the most experience of any party leader, was sidelined, shut out of the TVA debate. The fact she is roundly praised for her civility in the House and her effectiveness as a parliamentarian, and repeatedly named most “trusted” party leader in polls, didn’t count for much. Nor did the fact that May put a party without the 12 seats needed for official party status on the political map. What matters in politics is power, and power is something the grassroots Greens, with their call for collaboration, find problematic. Partisan politics is antithetical to the sort of co-operation necessary to fight climate change, Greens say.Elizabeth May has been Canada’s most reluctant, confounding politician since 2006, when she was elected leader of the federal Greens. The party May joined was riven by internal debates over whether it was a political party or a movement. May, a lawyer, had a foot in both camps—as a former policy adviser to the minister of the environment in the Mulroney government, and a life-long environmental activist who headed the Sierra Club of Canada. It took May five years to win a seat in the House of Commons;  she was the first Green elected in North America. But the successful growth of some 80 Green parties worldwide has hinged on proportional representation voting systems, where the number of seats a party holds mirrors the popular vote. Trudeau’s broken electoral reform promise was a major blow to the Greens, whose popular support of 6.4 per cent this election is up from 3.4 per cent in 2015. Under proportional representation, the newer percentage would have translated into 21 seats. First-past-the-post fosters strategic voting for the lesser of two evils, or, as May liked to put it, “the evil of two lessers.” Thanks to the Courtesy of :