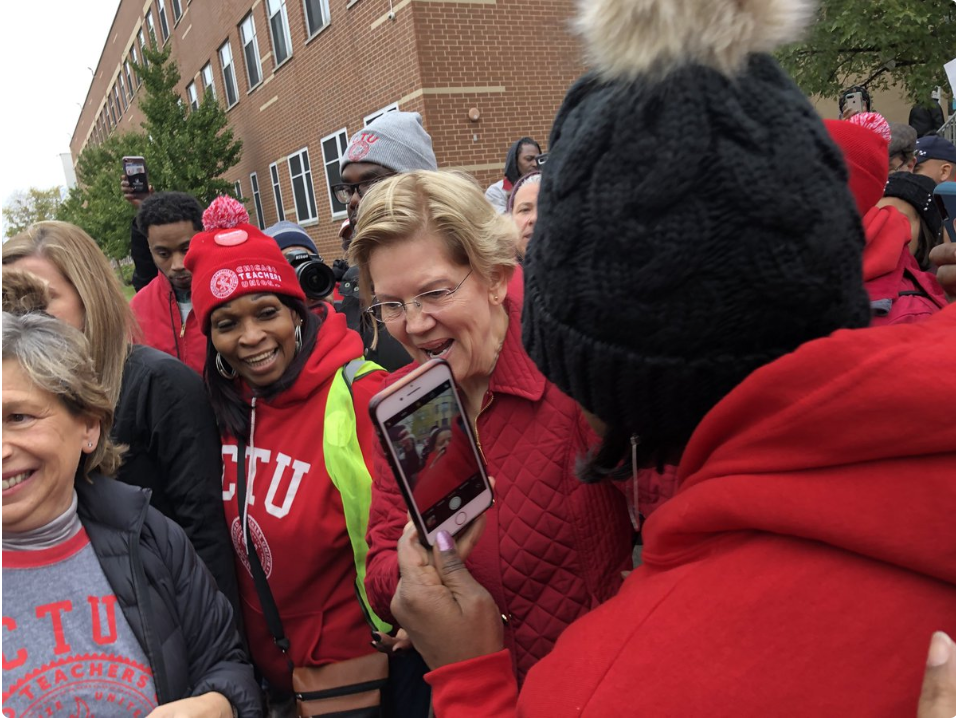 The Chicago teachers strike seemed to move further from resolution late Monday and teachers at the Passages charter school also went on strike, while the striking teachers got support from Sen. Elizabeth Warren, who joined them on the picket line on Tuesday. Monday night, Chicago Teachers Union President Jesse Sharkey sent out a statement saying that negotiations had stalled, seemingly on orders from Mayor Lori Lightfoot. Sharkey said that progress had been made to that point—in the first days of the strike, the teachers and the city had reached “tentative agreements on staffing to support homeless students, on staffing for Pre-Kindergarten classrooms and naps for those young students, on letting counselors work with children instead of random assignments like substitute teaching. We won an extension of the charter moratorium and support for programs to address the teacher shortage, especially among teachers of color.”

But on Monday that progress abruptly halted, Sharkey said: “After two days of striking, our bargaining team was beginning to see glimmers of progress on issues that matter to our members. Today, on day three, that progress stopped dead. It was clear from the mayor’s letter to the press demanding members go back to work without a contract and from the sudden atmosphere of stonewalling from the CPS team, that the mayor had pulled the plug on negotiations. The CPS team scheduled to negotiate with bus drivers in SEIU 73 spent exactly 12 minutes at the bargaining table. These vindictive actions have served to halt the real progress that the negotiating teams were making toward resolution of the contract.”

Lightfoot and Chicago Public Schools management put out a competing statement agreeing that bargaining had been going well but pointing a finger at the teachers for refusing to go back to work without a contract and at the union for pulling back from negotiations.

Published with permission of Daily Kos