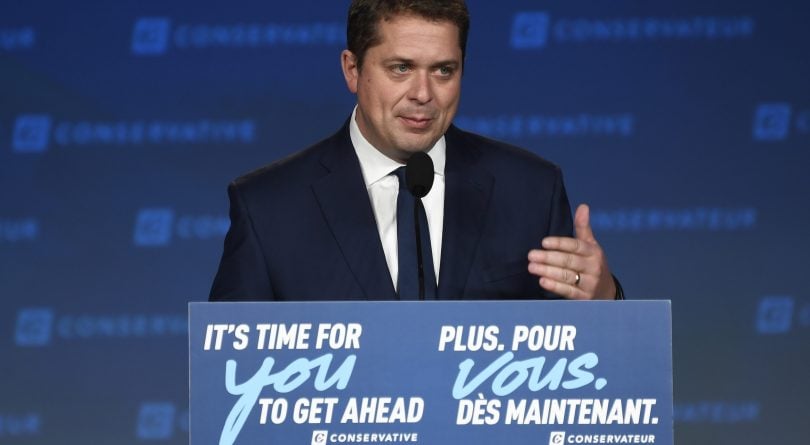 If Andrew Scheer and Justin Trudeau seem to have agreed on one thing—aside from the time of night on Monday to begin their post-election speeches—it’s that Alberta and Saskatchewan sent a loud, ornery message with their votes.“I’ve heard your frustration and I want to be there to support you,” the Liberal leader said in his victory speech.“To those in the West, I hear your frustration and your anger,” Scheer told reporters at a Regina hotel the morning after.That message, of course, was sent through industrial-sized bucket loads of votes for the Conservatives in the two Western oil-producing provinces, though one Edmonton NDP seat was the exception in a 47-seat sea of Sask-berta blue. So Scheer reasonably felt like he ought to harness that anger, somehow.RELATED: Now—finally—Parliament can demand real answers on SNC-Lavalin“We will fight for you,” he said. “We will do everything we can to make sure this Liberal government understands it has to change its course.”There’s serious work the Trudeau Liberals must do to ease Western angst, and I wrote about that before votes came in. Canada will be watching. The whole country will take note, too, of how Scheer and the Conservatives stickhandle the heightened divisions.Tories won the popular vote because of Alberta and Saskatchewan, where they notched well north of 60 per cent of support. Outside of those two indigo-hued provinces, the Conservatives only won 28.6 per cent support, compared to Liberals’ 36.4 per cent. And the seat count beyond this would-be “Wexit” zone was 157 to 74.RELATED: The saddest victory party in CanadaBarring some ugly series of developments leading to serious talk of Western sovereignty, this way of cognitively excluding these two provinces from the national math will serve no real tactical purpose. But it does serve to show how poorly Scheer’s party performed in the rest of the country. The Conservatives sincerely want to erase the 36-seat gap between them and the Liberals next time, and that path cuts through the East.From the way Scheer spoke of how his team would sift through the results to determine where they fell short, one wonders if they’re hoping to find that the only problem was a lack of solid ground game, having fought this election without the help of Jenni Byrne, Harper’s accomplished get-out-the-vote general. It will be harder for the leader’s inner circle to reckon with how Scheer performed, and how problems in the message they were selling worked great in two provinces, but inadequately in the other eight.In much of the country, voters appeared to reject Conservative pushes of fiscal restraint, and of scrapping the carbon tax, so much so that New Brunswick Premier Blaine Higgs, a Conservative who had joined the Western provinces’ fight against the levy, announced a course reversal on Oct. 22. Québec voters were not charitable towards the party’s pledge for an energy corridor, which Scheer suggested would benefit the province’s hydro as well as Western oil (they saw through it as a plan mainly designed to clear obstacles to a future eastbound pipeline). There’s a reason, after all, Scheer announced the corridor plan in Edmonton, rather than in Trois Rivières.RELATED: Climate change, extreme weather and the ConservativesThe Red Tories in the party may begin urging a more serious climate plan, and an embrace of carbon pricing to woo Eastern voters. Those won’t play well in this newly solidified chunk of the Conservative base (as part of his one-page letter for a “fair deal,” Saskatchewan Premier Scott Moe has demanded Trudeau scrap the carbon tax that voters just tacitly endorsed). He also urged equalization reform, as did Alberta Premier Jason Kenney, in an even more demand-filled five-page missive to the Prime Minister; both leaders are hoping to leverage the rage, and the federal party’s oodles of supporters will want Scheer to bring that message to Ottawa, just as many Eastern Conservatives may begin pushing for a broader pitch from a national party.Does Scheer dare bring forth Moe’s and Kenney’s demands for equalization reform, which if pursued to its logical end would deny federal grants to Atlantic provinces and Québec with negligible benefit—beyond a sense of moral justice—to the more prosperous West?Scheer must determine how to navigate the tricky balance that Trudeau faces, between East and West, the environment and resource economy. Neither leader got them right in this election, as the results show.But before either leader gets to test their balancing skills in a general election, Scheer will face a 338-riding battle to keep his job. He faces a mandatory leadership review at the party convention next April and by party rules, every constituency sends an equal number of voting delegates. That means 3,000 Conservative members in Red Deer–Lacombe or Regina–West have as much ability to determine his fate as 13 members in Toronto–Danforth or Longueuil–Saint Hubert (where Conservatives notched fifth place). If the petro-West and the rest are indeed two solitudes as some disgruntled Western voices now say, Scheer’s leadership review would be the first concrete test of how successfully a national leader can bridge them.MORE ABOUT ANDREW SCHEER:Andrew Scheer’s post-election speech: Full transcriptWhy Andrew Scheer’s party is so glumHow Justin Trudeau and Andrew Scheer could both loseCode blue: Which Tory wore his nondescript shirt better? Thanks to the Courtesy of :