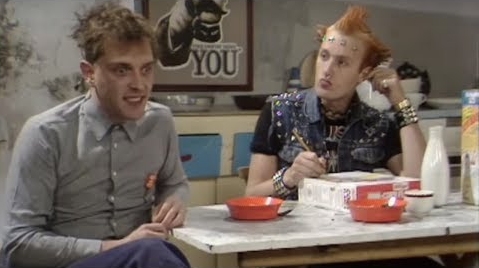 Here’s my story. (Apologies for length.)

Four men in a nightclub

George, Dai, Jock and Mick/Mike were work colleagues at Yookay Ltd. and shared the same building. George and Dai tended to work close together (despite Dai not really enjoying such a set up), whilst Jock and Mick/Mike had a little more autonomy within their own offices. George tended to think of himself as being the most important member of their group – the Team Leader or the David Brent, if you like.

George then considered himself the leader of their section and tended to exert his influence even outside the offices of Yookay Ltd. Dai was of the type not to upset the apple cart and tended to keep moody silences; keeping his head down and getting on with his projects.

Jock however was rather more vocal and would often raise his voice against George’s “unwarranted meddling.”

Mick/Mike’s was a more special case. You see, he suffered from Dissociative Identity Disorder. On some days, the Mick personality was dominant and, after having had a bitter row with George, he would seek reassurances from his half-brother, Paddy; an ex-employee of Yookay Ltd., but who was now working successfully for himself. At other times, the Mike personality would pledge undying loyalty to George and the set up at Yookay Ltd., and not a cross word would be exchanged between him and his colleague.

Now, one evening, the four colleagues had gone to the Europa nightclub together. What George had seen in going there in the first place was rather a mystery. You will have already have gathered that George was not very much a team player or a social animal. His attitude at the nightclub confirmed all this. The music was too loud. Or it was not to his taste. The lights were too bright. The guests were performing ‘obscene’ movements as they gyrated on the dance floor. The drinks from the bar were some imported, fancy stuff – not like the warm beer he preferred in the Farage Arms pub back home. And the cost of entry! Goodness gracious! It was so exorbitant – and that for facilities he didn’t like one bit: he was minded to ask for a personal rebate.

It was then that George announced, “We’re going home.”

Now, it’s one thing to say that you don’t like a party and that you’re leaving. But, don’t you think it was a bit presumptuous of George to actually say “we” and including Dai, Jock and Mick/Mike in the equation and without making sure with them first? That wasn’t George’s way though. At work, as we have seen, he was known for throwing his weight about and getting his own way. In a similar fashion, he thought he could bully his colleagues into his ways of thinking outside Yookay Ltd.’s offices, too.

“We’re going home?” Jock retorted scornfully, emphasising the “we.” “And who do you think you are telling us that “we” are the ones going home from this great nightclub?”

“I saw you flirting with that dark-haired girl over there in the corner,” said George. “Positively unseemly. Not the conduct we’d expect from an employee of Yookay Ltd.”

“You mean Frances,” Jock replied. He grinned. “Frances was an ex of mine and we lost touch when I started working for Yookay Ltd. We were very close. We even had an alliance to be married. I was getting re-acquainted.”

The grin disappeared and was replaced by a grimace.

“Until your ham-fisted approach broke up our relationship,” Jock added bitterly.

“Why you ungrateful little creep! I’ve given you more than enough support at Yookay Ltd.! What more could you ask for?”

“What more could I ask for?” Jock repeated. “Why, you could let me make up my own decisions on projects at work. You could stop looking down on me and telling me what to do all the time. And you’re not telling me that just because this Europa nightclub is not doing the things you want, that we have to leave.”

Jock’s resentments over the years were boiling over.

“In fact, George, I’ve had enough of you and your bullying over the years – I’m leaving you!” he shouted.

But people rarely listened to him on account of his soft voice and his lack of self-confidence. It would have taken much more of an effort on his part to sound off in the same way as Jock had done.

“Shut it!” George roared at Dai, in typical Eastenders fashion. “You told me before you wanted to leave. You’re in this with me! You know your future lies under my stewardship at Yookay Ltd. Think how stupid Jock would be throwing in his lot with this bunch of strangers, and an ex he hasn’t spoken to in years. He wouldn’t last a year with any of them – and away from us at Yookay Ltd.”

Dai said nothing and looked down at his shoes.

“You’re wrong, George,” Mick said softly. “My half-brother, Paddy has been coming to this Europa nightclub now for years. And he’s enjoyed the internationalism of it immensely. No more ructions with you at Yookay Ltd. He’s now free to do his own thing and make his own friends. He has a place in the world – he knows it and his friends know it. He’s a happy man. And I want to join him in that happiness.”

“Another (“Tractor” – Ed)!” George bawled. “Such ingratitude! To be honest with you, when you were in your Mike phases, I tended to over-indulge you. And this is how you repay me! Well, good riddance! I can do without the lot of you! I’m going home – and to hell with this poxy nightclub. I never wanted to come here in the first place. Come on, Dai!”

“See you,” chorused Jock and Mick, grinning at George.

“We should have left you and Yookay Ltd. long ago. We’re going to stay and enjoy the party atmosphere here at the Europa,” Jock added defiantly. “Too bad you can’t stay!”

George stormed out, muttering threats against Jock and Mick under his breath. Dai stood on the threshold, a confused look on his face. He was less sure of where his destiny lay.
_____