As the mandate for a second independence referendum currently sits gathering dust in the SNP vaults, discussion has started on ways to generate some movement. One of these has been the possibility of a Wings political party being set up to campaign for Holyrood list seats, which has generated rather a lot of attention. 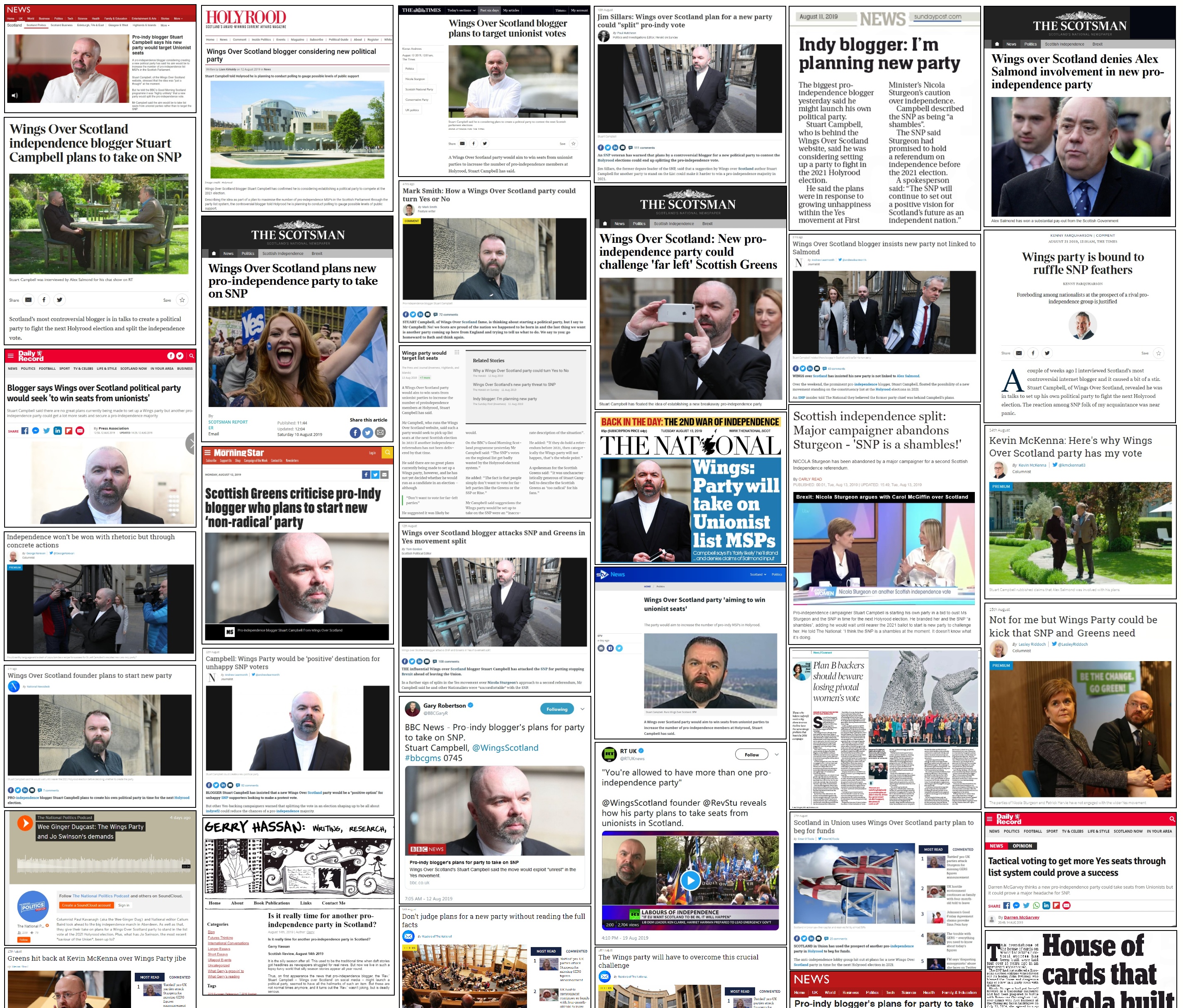 Various pundits have been loudly vocal about the perceived pros and cons, but I’ve been extremely dissatisfied – in particular with those dismissing the value of a Wings party – with the quality of evidence and analysis that they’ve produced to justify their negative opinion. So I thought I’d use my day-job skills in commercial data science to analyse and understand the benefits, or otherwise, of the idea.

NOTE: I strongly believe in the democratisation of information, so at the end of this article you’ll find the data and the Excel files I’ve used in my analysis. If you think I’ve cherry-picked circumstances that suit my personal views you can play around with whatever scenarios and numbers you want to.

Firstly, I’m afraid we need to dig just a little into how the voting system used in the Scottish Parliament works, to understand the difference between constituency and regional votes and the impact of the first on the second. There’s a good explanation on Wikipedia if you want more depth on it, and if you already know how it works I’ll indent this bit so you can skip past it.

Your first vote, the constituency vote, is a straightforward First Past The Post (FPTP) contest, where you directly elect a single MSP to directly represent your local seat, just as is done at the Westminster UK elections.

For the second vote – the regional assignments – each seat is awarded in a round of calculations. The twist is, the winner of the first list seat in each region isn’t necessarily the party with the most votes in that region. That’s because each party’s regional vote is divided by [the number of constituency seats they won in the first vote +1].

Party B wins the seat, even though Party A has massively more votes.

This a key point of the Additional Member System used in Scotland. The more constituency seats you have, the more difficult it is for you to win regional MSP seats. In the 2016 elections, the SNP’s 953,587 regional votes got them just four list seats (238,000 votes per MSP), whilst the Greens’ 150,426 regional votes got them 6 list MSPs (25,000 votes per MSP). Labour’s MSPs were the cheapest of all, needing less than 21,000 votes each – under a tenth as many as the SNP’s.

So now we all know that people giving both their constituency and regional votes to the SNP was very inefficient in gaining an pro-indy majority. And the question under debate is whether there’s a better way.

One option is for SNP voters to give their list vote to the Greens, but for a variety of reasons many people are increasingly uncomfortable with doing so. At the last election RISE and the SSP also tried to win over SNP list voters with radical left-wing manifestos, without success. So what if there was another pro-indy choice?

To assess the prospects you need to model how the Holyrood system works, so that you can plug in various scenarios and see how they play out. Luckily, Steven Kellow has already done the hard work by constructing an Excel macro workbook, which you can find on his website.

A very important point, compared to what you might have already seen elsewhere from other pollster bloggers, is that this has been modelled at a region level and then totalled up, rather than applying uniform figures across the country. Why? Well, there are significant variations in how people vote across the Scottish regions.

Here’s an example using the regional vote from 2016.

Simply applying percent shifts at a national level will often give very misleading results. Just look at the variance in Lib Dem vote share in particular across regions – from less than 2% in Central to over 14% in Highland.

The method we’ve used here is much more accurate and we can perhaps tweak our strategy a bit by what we learn. So let’s cut to the chase.
.

As our start point, we’ll use all the data from the 2016 Holyrood elections and pose a simple question:

If we could have persuaded some SNP voters to give their regional vote to a Wings party, would it help to gain a larger majority of pro-independence MSPs? If so, what’s the tipping point and are there ways it could backfire and LOSE the indy majority?

This graph – based on individual regional modelling rather than a national uniform swing – shows the overall result: 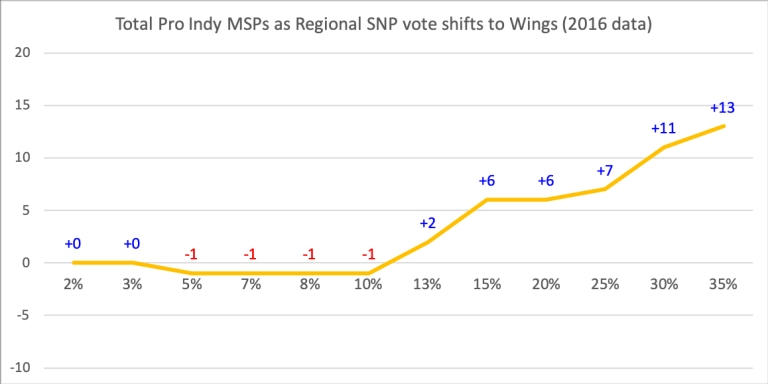 Up to 5% of SNP voters (that’s about 2% of the total all-Scotland list vote) switching to Wings in 2016 would have made no difference to the size of the indy majority. Between 5% and 12% we’d have lost one SNP list seat (I’ll get to that in a moment), which would have had no meaningful impact – there’d still be a pro-indy majority of 6.

But at 12% (under one in eight SNP voters) we reach a tipping point where SNP voters giving their list vote to Wings instead starts to dramatically increase the pro-indy numbers (You can find the full breakdowns in the Excel workbooks.)

But how? Where do those Wings seats come from?

At the 12% tipping point, we gain 4 Wings list MSPs, at the expense of 2 SNP, 1 Conservative and 1 Green (so a net pro-indy gain of 1). After this, it becomes a avalanche of Conservative and Green MSPs over to Wings ones.

By the time we reach 35% of SNP voters going Wings on the list (the highest point we counted to), the figures are:

But do we have to lose SNP list MSPs to gain Wings ones? Not necessarily. There’s no obligation to stand in every region, and we can be picky about where we run Wings candidates.

These are the actual 2016 results:

So what if we don’t stand any Wings candidates in Highlands & Islands or South of Scotland, the only two regions where the SNP have any list seats? 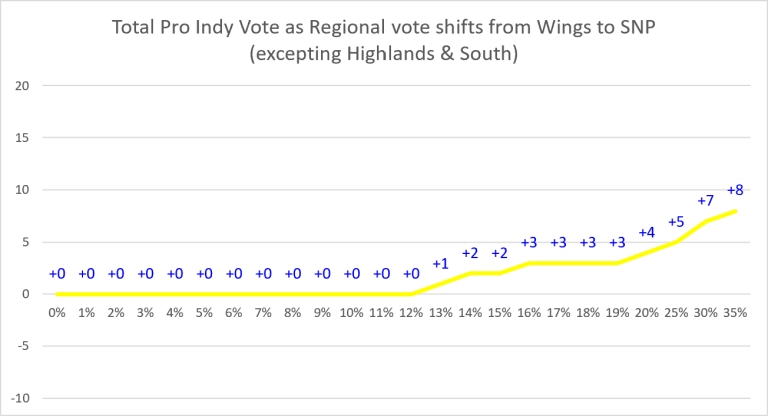 Now there’s no negative effect for ANY size of Wings vote, and a potential pro-indy gain of eight (trebling the size of the indy majority).

The downside is that because we’re not sitting in two large regions the total benefit is lower, as we’re not eating into the Conservative and Labour MSP numbers in those regions too.

Splitting the difference, let’s say we avoided the South of Scotland but did stand in the Highlands, where there’s only one SNP list seat:

Again we have a worst-case scenario of -1 overall indy seats, but the potential gains go up to 10. (In the case of H&I, at the expense of the Tories and the single Green.)

Luckily for us there’s a very recent YouGov poll (fieldwork 29 Aug to 3 Sep) that we can examine. I’ve used the data from this poll to get estimated constituency seat counts from Election Polling, from which we can base the regional seat assignments.

The projection shows Labour losing all three of their existing constituency seats, which I’ve assumed transfer to the SNP as they were in second place in all of them in 2016 and it shows their numbers increasing by the same amount.

To estimate the regional vote volumes, I’ve used the regional table each party’s list vote from earlier in this post, using the regional variations to calculate votes in each region from the Scotland-wide regional-vote figures in the YouGov poll.

What happens if we plug the poll (including constituency seats) into our model? 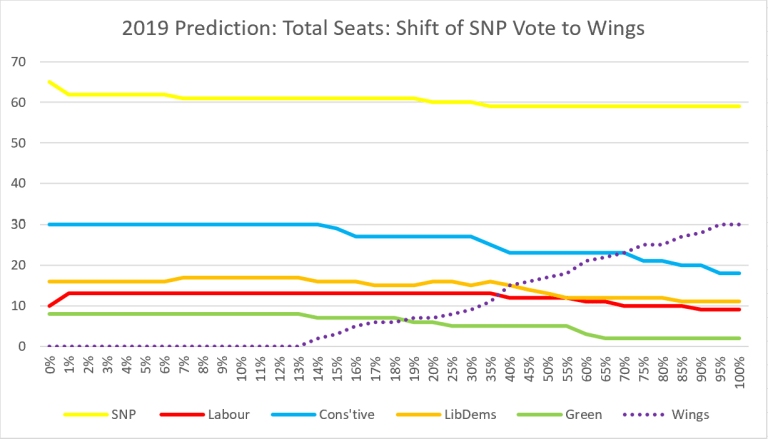 As we shift regional votes from SNP to Wings, we initially lose one SNP list seat to the Conservatives, but then, as before, we start eating into the regional seats of all the other parties – the Greens and Conservatives are first to fall. And again we shift the balance of power towards pro-indy parties. 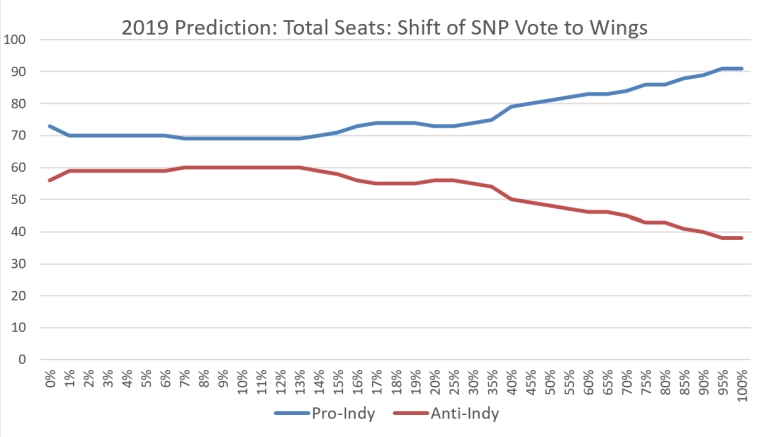 That’s been a lot of data to absorb, so let’s have a pause and a quick summary. We’ve looked at three options:

– What would have happened in 2016 if Wings had stood all across Scotland.

– What would have happened in 2016, if it had avoided in standing in South Of Scotland, where 75% of SNP list seats are.

– What might be the effect if a Scottish Parliament election happened now, going by the latest polling data. 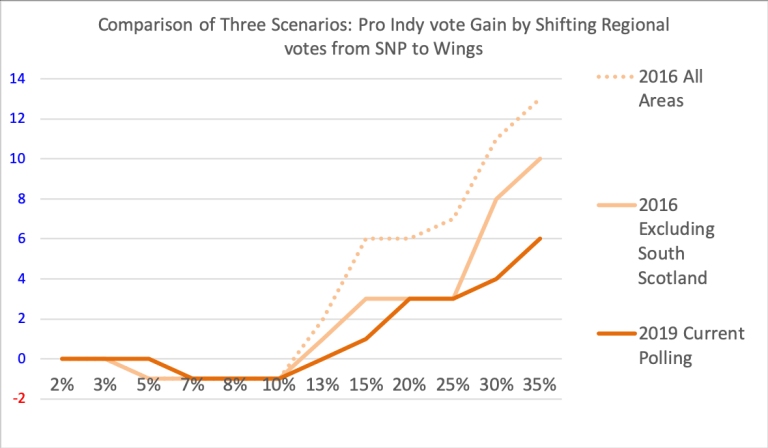 So far we haven’t found a single case where the existence of a Wings party poses any threat to a pro-indy majority, and a strong suggestion that it could very significantly strengthen one. So we need to go further and test some possible scenarios.
.

If the SNP do as well or better in the constituency seats as in 2016, there’s no conceivable danger to Yes – they’re already pretty close to a majority on those alone. The example cited by those opposed to the idea of a Wings party is a situation where the SNP don’t sweep the FPTP seats in the constituencies.

At the moment, they have 59 FPTP seats, but some are narrowly held, and future events might reduce their vote. So what if we chopped 10 seats off that 59 and give them to the Lib Dems and the Tories? And what if we additionally drop the SNP’s regional vote share by 5% and give that to the Lib Dems and Tories too? (Because there appears to be zero current prospect of a Scottish Labour revival.)

How bad could it be? The SNP would still have a majority of constituency seats and with a lower divisor would surely pick up enough regional seats from their still-huge list vote to compensate for a few constituency losses, right?

(You’ll find the workbook for this scenario in the files as “Simple regional shift from SNP to Wings Tough scenario 1.xlsm”)

The reality is a nasty shock. The way AMS works still gives the overwhelming balance of regional seats to the Unionist parties, even though we’ve lost 10 SNP constituency seats. The small number of additional regional the SNP pick up are swamped. We lose the Yes majority in Parliament.

In this tough scenario, does voting for Wings instead of the SNP on the regional vote help, or does it make it worse? 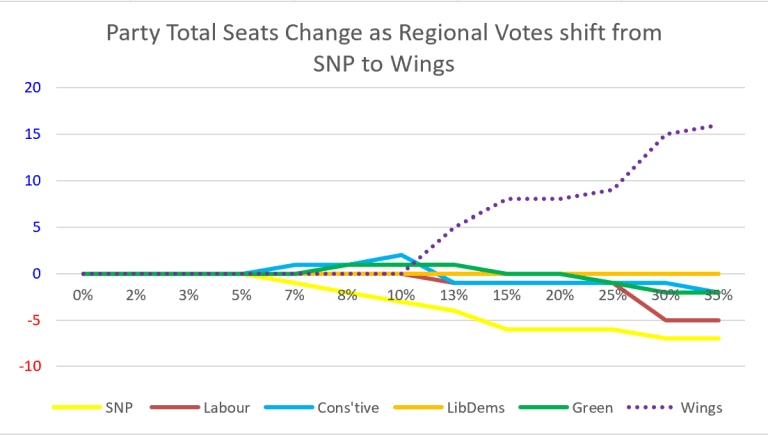 On first sight it looks bad, as we’re now dropping more SNP seats (7) than we were before. But the Wings increase (16) is also more. So the good news is that yes, with enough of a list-vote swing to Wings – around one in five SNP voters – we’d actually get the pro-indy majority back even if the SNP had a bad night. 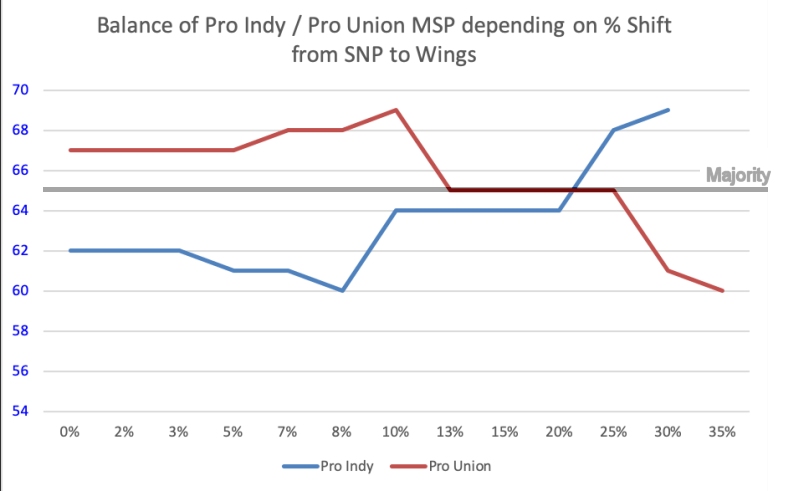 The most sobering aspect of all this analysis is that the AMS system used in the Parliament works very hard to not give ANY party a majority, by using a two-stage seat-assignment system with a heavy penalty to any party that’s “too popular” at constituency level and therefore is disproportionately favoured by FPTP.

The multiplicity of Unionist parties versus a single major pro-indy party actually gives Unionism a serious advantage in how regional votes are assigned, by applying fewer/smaller divisors to their vote. A strong second pro-indy party balancing that our could be the difference between holding onto Holyrood’s pro-indy majority or not.

You’ve done very well to get this far, so here’s one last chart, covering the range of possibilities we’ve examined in detail in this piece. 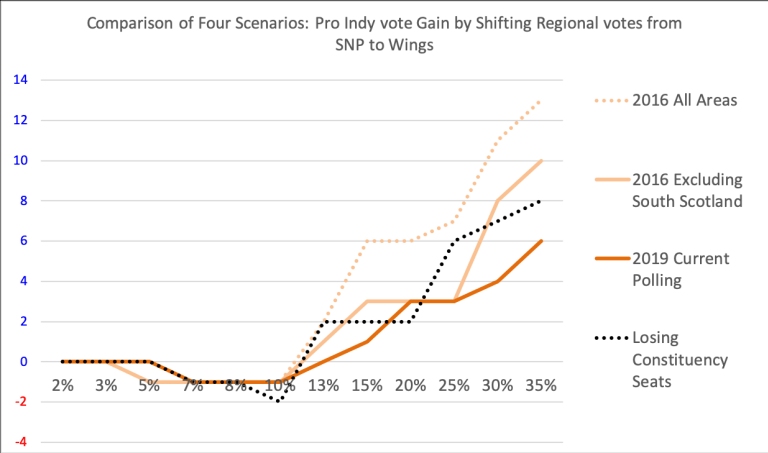 As you can see, it demonstrates that a Wings party would in any currently-plausible circumstances pose no risk whatsoever to the Yes majority, and might well produce some significant or even critical gains. But I’m sure that certain other rather sensitive commentators will as we speak be frantically searching for permutations where it could do damage, in order to justify their increasingly-heated opposition.

The documents are below. I invite them to make their case.

One thought on “Flying with Wings”