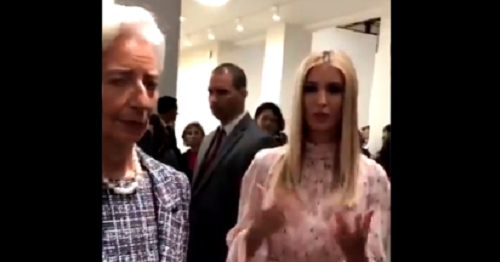 There’s been no word from the White House as to why America’s Would-be Crown Princess would go with her father to the G-20 Summit in Osaka, Japan on the taxpayers’ dime.

But there she is, in her prim and appropriately demure designer dresses, front and center with her dad in the press photo shoot of world leaders.

Apparently Trump was teaching other world leaders at the G20 about nepotism- this is a REAL photo of Ivanka Trump at G20 with world leaders. Reminder The GOP went nuts when the Obamas went on a family vacation! But bring your daughter to the G20 is fine pic.twitter.com/JinRRYBJ0e

At the table on the US side for Trump’s first bilateral meeting of the G20 (left to right):

It’s a cliché at this point, but imagine how the Republicans would howl if President Hillary Clinton had Chelsea this visible among the world leaders.

Is she there as a handler/caretaker in Melania’s absence? Trump does look particularly out of it in the photo above.
Is she there to negotiate new international trademarks to enrich her family even more?
Or does she just want the legitimization by the world leaders as someone very important?

Look at her attempt to elbow way into a conversation with IMF Chair Christine Lagarde, exiting British PM Theresa May, French president Emmanuel Macron, and Canadian Prime Minister Justin Trudeau. She nods to points made by May and Macron about “social justice” then tries to interject, much like a child coming up to her parents’ friends at a party and trying to describe her elite status on Minecraft as if that elevates the child to the adults’ level. Lagarde then devastatingly just dismisses her from the conversation by rolling her eyes and turning her back to her as Ivanka is left with a frozen smile on her face. In diplomatic circles, that’s about as blatant as a slap across the face.

And most painfully, this video was first shared by a French diplomatic commission. The whole world sees this inexperienced, ill-prepared, joke of a shoe designer pretending that she has any business with world leaders. They see how the US has gone from the leader of the Western world to a literal joke.

Rep. Alexandria Ocasio-Cortez had the definitive response that was shared globally:

It may be shocking to some, but being someone’s daughter actually isn’t a career qualification.

It hurts our diplomatic standing when the President phones it in & the world moves on.

The US needs our President working the G20. Bringing a qualified diplomat couldn’t hurt either. https://t.co/KCZMXJ8FD9