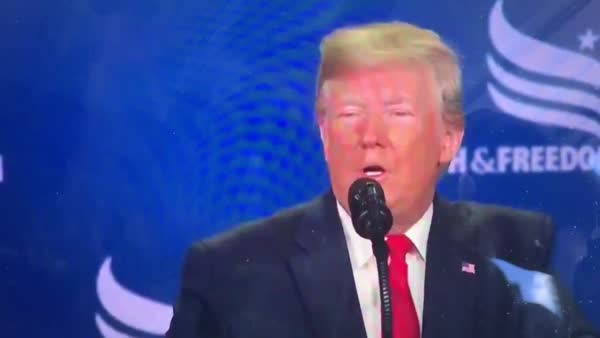 Maybe Meghan McCain has a point. This is a new low for the so-called president, and I didn’t think that was possible.

At the Faith and Freedom Coalition conference, the so-called president said “We needed 60 votes & we had 51, & sometimes we had a hard time with a couple. Fortunately, they’re gone now. They’ve gone on to greener pastures. Or perhaps far less green, but they’re gone. Very happy they’re gone.”

There was reportedly embarrassed laughter during this segment. He also praised “TiVo” as being a cool way to watch tv, declared victory in the War on Christmas, and blamed Obama for family separations.

And the big problem for Trump and Republicans is, he has no staff to stop him from doing this. Faith and Freedom is the easiest gig for a Republican. Say two words: “abortion” (bad!) and “Israel” (good!). You’re done.

If people walk away from a FAITH AND FREEDOM speech by a Republican president running for re-election feeling sick and stunned?