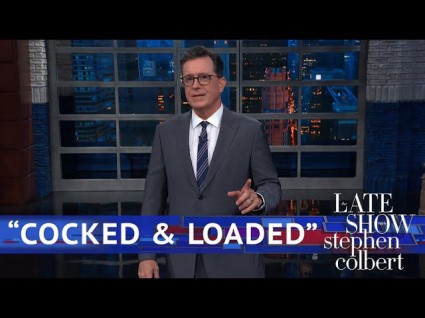 Via The Week, Stephen Colbert talks about Trump’s aborted attack on Iran:

On Thursday night, “we were poised to start a war with Iran, but Donald Trump did the right th— sorry, I’m just not used to saying that sort of thing,” Colbert said. “Trump made the correct moral— The point is, this is the first thing that Trump has ever ordered that he did not finish.” He deconstructed Trump’s explanation, from his belated question about Iranian casualties to his hilarious “cocked & loaded” malapropism.

Trump reportedly “likes the decisiveness of calling off the terrible command Donald Trump just gave,” he said, but Trump also postponed his planned mass deportation of immigrant families this weekend, though even this “shred of human decency has an expiration date.”