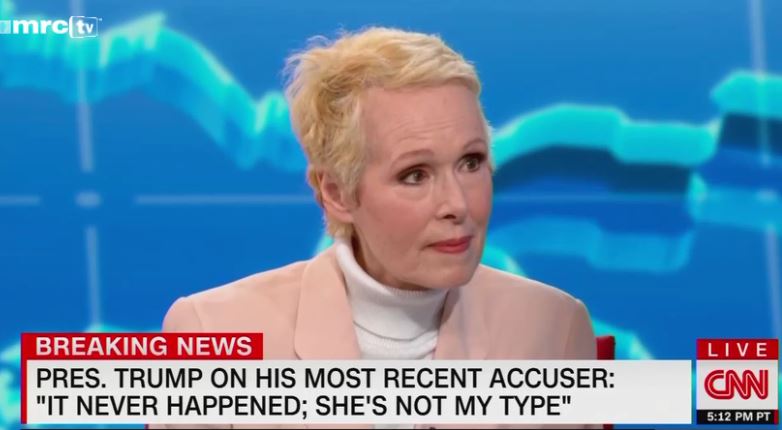 E. Jean Carroll, journalist and current advice columnist for Elle magazine, is out with a memoir, What Do We Need Men For?, featuring sexual assault allegations against President Donald Trump. Carroll accused Trump of assaulting her in a dressing room in Bergdorf-Goodman in New York City in the mid-1990s.

Initially many journalistic outlets held off reporting her claims, which caused anger in left-wing social media circles. On cue, the New York Times executive editor Dean Baquet has issued a groveling apology for not giving the thin allegations more intense play and promised to do better, as noted by the paper’s “Reader Center” writer Lara Takenaga: “Our Top Editor Revisits How We Handled E. Jean Carroll’s Allegations Against Trump –Dean Baquet, our executive editor, says ‘we were overly cautious’ in our handling of a prominent writer’s allegations against the president.”

The paper tried to assuage its left-wing, Trump-hating readership (click “expand,” emphasis mine):

After an article last week reported the advice columnist E. Jean Carroll’s rape allegations against President Trump, some readers accused The Times of downplaying the story.

Many have written to ask us why we didn’t give the allegations more attention on our website and in print. (The Times published an 800-word story on Friday evening, but did not promote the story on its home page until late Saturday morning and did not run a print story until Sunday.) Some questioned whether the lack of prominence showed too much deference to the president’s denials, or whether it even suggested misogyny or an unwillingness to believe a victim’s account.

The Reader Center took the concerns to The Times’s top editors and sat down with Dean Baquet, the executive editor.

He said the critics were right that The Times had underplayed the article, though he said it had not been because of deference to the president.

He pointed out that The Times had written some of the earliest stories about Mr. Trump’s alleged abuse of women, and that its coverage of Harvey Weinstein helped spark the #MeToo movement, but in this case, he said, “We were overly cautious.”

Since the Carroll story broke, editors have continued to discuss how it was handled, and Mr. Baquet said he had concluded that it should have been presented more prominently, with a headline on The Times’s home page.

In the case of Ms. Carroll’s allegations, which she revealed in her forthcoming memoir, “What Do We Need Men For?,” The Times did not find independent sources — people beyond the two friends Ms. Carroll cited in her book — who could verify her account at the time of the article’s publication, or any other additional corroboration.

Be assured that The Times wouldn’t response with such alacrity to conservative outcry about its coverage or lack thereof.

But now the paper risks being caught in a whipsaw, if Carroll’s credibility as an accuser suffers, or she keeps making bizarre comments like the one she made Monday night to CNN host Andersen Cooper, which only right-leaning outlets have noticed: “I think most people think of rape as being sexy. Think of the fantasies.”

As of early Tuesday afternoon, The Times has yet to acknowledge those bizarre comments.

The Times had a far different reaction to an old rape accusations against a president back in 1999, after Juanita Broaddrick came forward with her story of being raped by Bill Clinton. Reporters lamented that “smaller outlets on the Internet and cable television” are “overwhelming the slower and more sober judgments of mainstream news organizations.”