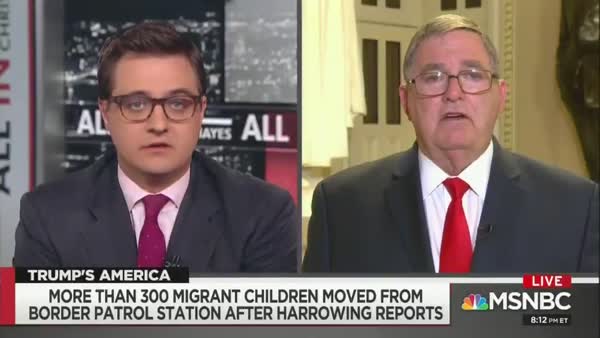 Donald Trump is seeking approval from his White Nationalist base. To do that, he and his DHS are promoting cruelty towards migrant children as (1) a deterrent against further immigration from the south and (2) a show for bigots to cheer him on. The cruelty is the point.

Rep. Michael Burgess of Texas is a “good soldier” in the Republican Party.

Chris Hayes wants to have someone on his show to represent the Republican argument, and this is the best he can do on a Monday.

But Congressman Burgess lost his cool, and went way over the top in his comments to Hayes.

His argument that the border facilities are fine is mind-boggling:

REP. MICHAEL BURGESS (R-TX): You know what? There’s not a lock on the door. Any child is free to leave at anytime, but they don’t. You know why? Because they are well taken care of.

Let’s not mince words. What is occurring with these kids at the border is a crime against humanity. And watching Rep. Michael Burgess of Texas dissemble on @chrislhayes shows how monstrous Republican lawmakers can be. Monstrous.

“There’s not a lock on the door, any child is free to leave at any time.”
Rep. Burgess on @allinwithchris

So any non-English-speaking 4-yr-old is really free to walk out the door into Middle-of-Nowhere, Texas at any time? Whether it’s a lie or the truth, preposterous. #inners

So, Rep. Michael Burgess is a good example of how Republicans can be counted on to defend the most reprehensible behavior simply because Republicans are doing it. This is where we are as a nation. #inners