We won’t defeat climate change, war and poverty by asking the likes of Mark Field to throw us a few crumbs from the table. 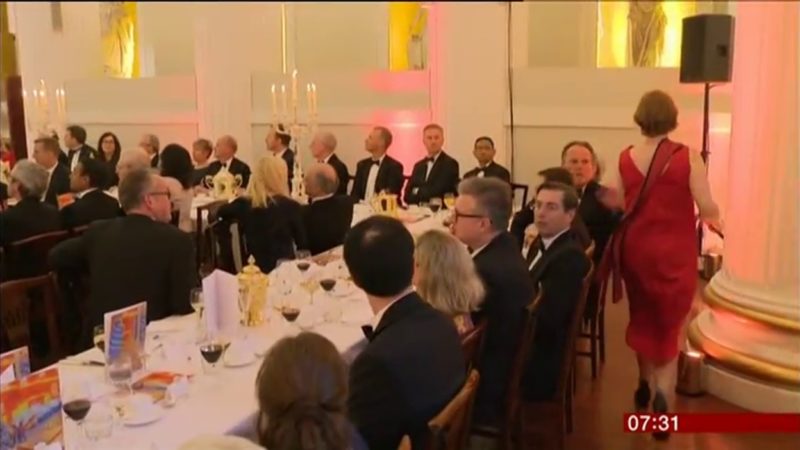 I woke up on Friday morning to the news that my former MP, Mark Field, had assaulted a nonviolent protester at the Mansion House.

I watched the footage of an upper class man, politically and physically powerful, grabbing a woman by the throat and slamming her against a pillar. He later claimed that Janet Barker, who was obviously demonstrating about climate change and carrying virtually nothing, “might have been armed”.

Field told Barker: “That’s what happens when people like you disturb our dinner”. Not the words of someone fearing assault, but the comment of a hyper-privileged man angry that the plebs had ruined his evening out. The austerity policies that Field supports have deprived some of the means to eat…but we mustn’t disturb his dinner.

By the end of Friday I had read and heard more justifications for naked aggression than I would want to read in a year, let alone a day. Some took to Twitter to blame the  protesters, saying they were responsible for the violence because they had engaged in direct action.

Our society’s distorted attitudes to violence mean that we confuse violence with conflict and peace with conformity. The protesters were engaged in conflict, not violence. Nonviolent conflict is not easy. It not only excludes physical attacks but rejects verbal abuse and personal hatred. It targets systems rather than individuals.

Those of us who engage in nonviolent direct action hope ultimately for reconciliation with others, but we will never be reconciled with the unjust structures of militarism, capitalism and racism. We seek to recognise our own faults, and our own complicity in the injustices we resist. It is all too easy to overlook that part, and I admit that I forget it far too often.

The violence of the powerful is the norm. It is the means by which conflict is swept under the carpet and the status quo made to appear natural and uncontroversial. The nonviolence of resisters is denounced as a threat to safety and public order.

People who speak about a problem are often portrayed, wrongly, as having caused the problem. You will be familiar with this process if you have ever raised a concern with your boss, only to be treated as if you are the problem.

Nonviolent activism draws attention to conflicts that already exist. As Martin Luther King put it: “Nonviolent direct action seeks to create such a crisis and foster such a tension that a community which has constantly refused to negotiate is forced to confront the issue. It seeks so to dramatise the issue that it can no longer be ignored.”

So nonviolent activism can at times be disruptive, uncomfortable and even illegal. At other times, it includes entirely lawful demonstrations and election campaigns. Either way, it involves conflict, not violence. It is condemned by those who cannot distinguish the two, or who think that morality lies in order rather than in justice.

A friend of mine recently surprised a police officer who told him not to walk down a particular street. When he politely but firmly challenged the policeman, the officer pointed out that my friend was wearing a pacifist badge. “Yes,” he replied, “And pacifists don’t let ourselves be pushed around.”

At the Peace Pledge Union we emphasise that pacifism is not about avoiding conflict. To be a pacifist is to be in conflict with dominant values and those who hold the most power in the world.

Sometimes people tell me that they “don’t believe in activism”. Were it not for activism, such people would have no right to vote, free healthcare, sick pay or religious liberty. Their children would be working 12-hour shifts in factories. We have our rights  because our ancestors struggled for them, often in the face of violence from the rich and powerful.

Progress comes from below, not above. It comes through means that match with the ends we seek. We will not defeat poverty, war and climate change through violence. Nor will we do so by asking the likes of Mark Field to throw us a few crumbs from the table. We need to disturb their dinners.

Symon Hill is Campaigns Manager of the Peace Pledge Union. He also teaches history for the Workers’ Educational Association.