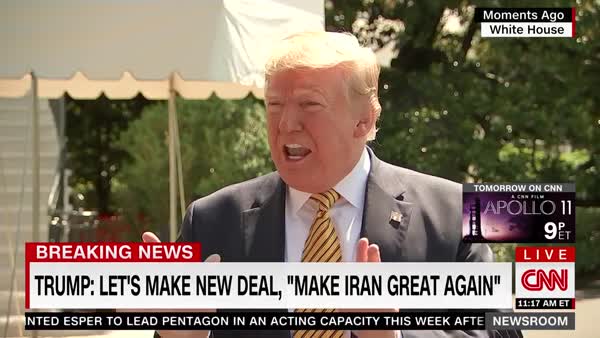 During a press pull before Trump left to go to Camp David, discussing the Iran conflict, he made a remarkably imbecilic —even for him — statement about Iran.

Trump said proudlythat Iran is being hit hard by the sanctions, and claimed, “All I want is no nuclear weapons.” Then he rambled on that the JCPA (Joint Comprehensive Plan of Action) was a nuclear treaty with Iran, which it was not. It was an agreement to which Congress was then able to attach stipulations.

Trump said he reneged on it because Congress didn’t approve it, but the agreement did not need Congressional approval. Trump also claimed there was no way to verify Iran was complying, which is a LIE, and said Iran could have nuclear weapons in five years, which it won’t.

Then came the kicker. Trump said, “But if Iran wants to become a wealthy nation again, become a prosperous nation, we’ll call it ‘Let’s make Iran great again,’ does that make sense? Make Iran great again. It’s okay with me, but they’re never going to do it if they think in five or six years they’re going to have a nuclear weapon. I know too much about nuclear, a lot about nuclear, and let me just tell you, they’re not going to have a nuclear weapon.”

FFS. Trump knows a lot about nuclear? Is it as much as he knows about winning?