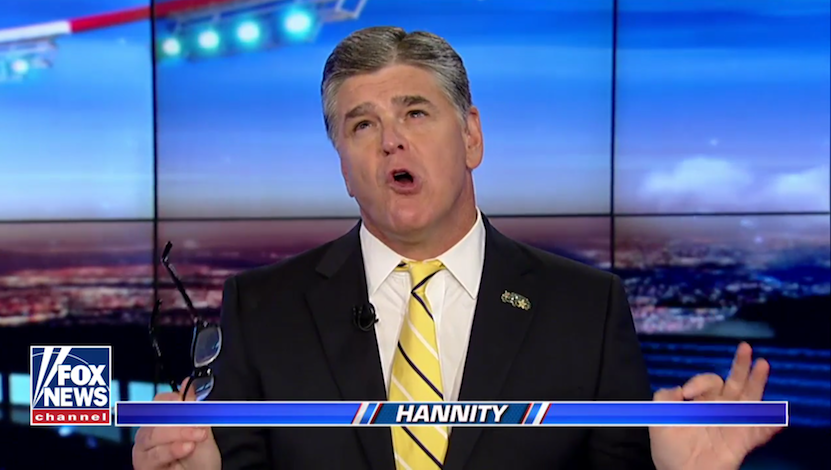 Like some overgrown character from West Side Story come to life – and to broadcasting – bullyboy Sean Hannity announced on the air he wants to meet CNN’s Jim Acosta “privately in a mutually agreeable schoolyard, alone.”

Acosta has a new book out, called, “The Enemy of the People: A Dangerous Time to Tell the Truth in America.” Apparently, Acosta wants to go on both Sean Hannity’s and Tucker Carlson’s show as part of his book tour but also because the two loudmouths have made disgusting attacks on him. For example, Carlson laughed heartily when his guest suggested an immigrant do “one of the jobs that Americans won’t do” and “drag Jim Acosta out of [the White House briefing room] and kick him to the sidewalk.” Hannity gave his explicit approval to a mob’s frightening harassment of Acosta at a Trump rally.

And let’s not forget that Bill O’Reilly once “joked” about how much he’d love to strangle Acosta.

But, apparently, Hannity and Carlson are afraid to take part in a discussion about what they dish out. Yesterday, Acosta ripped the two hate mongers. From Mediaite:

Today, Hannity responded with just the kind of class you’d expect, which is to say none at all. Just yesterday, The Daily Beast noted Hannity’s juvenile preening about his fighting and firearm skills. Today, Hannity sounded like some 60-year-old high school greaser as he seemed to completely miss Acosta’s metaphor and talked eagerly about meeting Acosta in an actual schoolyard. Media Matters caught the tough talk on Hannity’s radio show:

HANNITY: Jim Acosta is begging to be on this radio show and TV show. And, my answer is no, go sell your garbage fake news on your lowest rated cable network. I’m not subjecting my audience to your lies and conspiracy theories and the hoaxes and your arrogant, egotistical demeanor and rudeness towards the president of the country. Sell it on fake news CNN. Then he says, “You don’t have the courage to meet me in the schoolyard.” I said, “I’d be glad to meet you in a schoolyard, tell me where and when, especially I’m free the week of the Fourth of July. I’m available.”

Stop bothering my staff. I don’t peddle lies like you do, go sell it on the lowest rated cable network in America. You don’t deserve to be on the #1 show.

…I will gladly meet him, but I have some conditions. I’ll meet him privately in a mutually agreeable schoolyard alone. As he requested. My only condition is this meeting will have nothing to do with his failing book, his failing career, or his failing network.

I hate to break it to you, Seanie-Pooh, but your brand is all about peddling lies. Where’s your apology for smearing murder victim Seth Rich with lies? For promoting birtherism lies, and then lying about it? For sucking up to the liar-in-chief so completely that even he mocks you? How about the fake Uranium One scandal you clung to after your own network debunked it? And you lie every day and night when you pretend (because even you must know better) that there is nothing between Donald Trump and Russia that anyone should be concerned about. That’s not counting the fact that we still don’t know why Michael Cohen claimed you as a client.

Oh, I could go on and on about your phony-baloney sanctimony, but I won’t.

Instead, I’ll just suggest that Acosta start reminding everyone that it’s been more than 10 years since “tough-guy” Hannity promised to be waterboarded and would do so to raise money for the troops.

Listen to Hannity lie about caring for the truth below, from the June 19 2019 The Sean Hannity Show, via Media Matters.