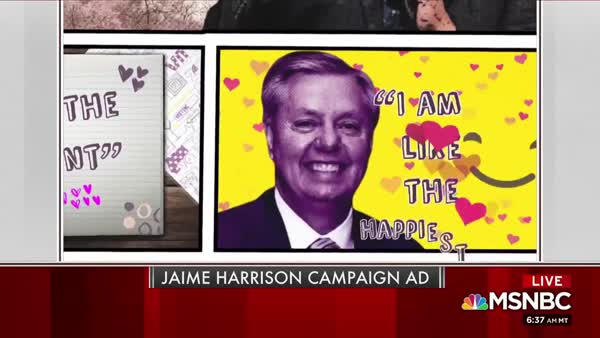 Jaime Harrison, the South Carolinian Democrat who’s running against Lindsey Graham for Senate, unveiled his new campaign ad, and it’s a good one. It uses Lindsey’s own words against him, and the closing line is especially effective.

HARRISON: Here’s a guy who would say anything to stay in the office. Lindsey Graham can’t lead us in any direction because he traded his moral compass for political gain.

“Jaime, I’m dead serious, you can use all of Lindsey Graham’s quotes to not only attack the president of the United States but Lindsey, you’re right,” Scarborough said.

“He said the president is unfit, Donald Trump is unfit to be president. Said if Republicans nominated him, they would be destroyed and deserved it. It’s on and on. Nobody said harsher things about Donald Trump than Lindsey Graham.

“It’s going to be fun,” Harrison said. “I want Lindsey Graham 1.0 to debate Lindsey Graham 2.0, and people will see the hypocrisy. He epitomizes why people don’t like politics anymore.”

“Charlie, if there’s one name, one face, one person that epitomizes the Republican party’s complete capitulation to Donald Trump, it would be Lindsey,” Scarborough said. “I have known Lindsey since ’94. I like him personally. It’s hard not to like Lindsey personally, but to hear what he said during the campaign and then see him flip-flop and attack anybody who says anything bad about the president of the United States? That’s, like, rich, even by Lindsey’s standards.”