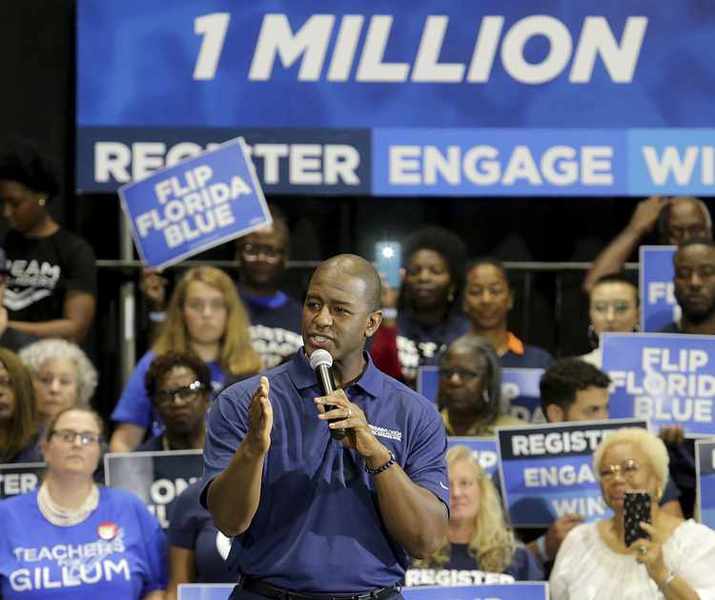 In 2016, Donald Trump pulled off an underdog win largely because of his freewheeling style and in spite of his undisciplined campaign apparatus.

Three years later, President Trump is still his shoot-from-the-hip self but his campaign is billing itself as a well-oiled machine, flush with cash and rounded out with a dedicated team of seasoned and committed professionals.

After a raucous prime-time re-election launch in Orlando Tuesday night, the Trump campaign, backed by the GOP’s extensive infrastructure, will now begin trying to prove its mettle as it tackles the more arduous behind-the-scenes brass tacks of finding and registering new voters and turning them out on Election Day.

After ditching several of his pollsters over the weekend when leaked polls showed him lagging against top Democratic contenders in several battleground states, Trump faces other obvious hurdles and setbacks. His uncanny ability to drive news cycles has the side effect of cementing divisions and leaving few voters without hardened opinions of him.

In the make-or-break swing state of Florida, for example, voters are evenly divided with exactly 48% approving and 48% disapproving of the president’s job performance, according to the latest figures from Morning Consult. And those numbers have been relatively static, hovering in the same range since June 2017.

As voters begin to focus on the 2020 contest and whether to give Trump four more years in the Oval Office, both sides say they are laser-focused on voter registration efforts and turnout.

The pro-Trump group America First Policies launched a voter registration drive Tuesday among those lined up outside of the 20,000-seat Amway Center in Orlando, which was filled to capacity for the kickoff rally.

“There are millions of patriotic Americans who believe in the America First movement but aren’t registered to vote,” said Brian Walsh, the group’s president. “Returning power to the people requires an active, engaged citizenry.”

Walsh said his organization plans to spend $20 million on voter registration efforts in Florida, Pennsylvania, North Carolina and Georgia – all battleground states Trump must win to secure a second term.

The big prize is Florida where roughly 4.96 million voters are registered Democrats and 4.7 million are registered Republicans. The state also has an estimated 9 million eligible voters who are unregistered, and groups on the right and left are targeting them with a vengeance this year.

Democrats are determined to reverse their slipping Obama-era registration advantage. In 2008, Florida Democrats held a 700,000-voter registration lead over Republicans but saw that dwindle to roughly 260,000 during the 2018 midterms.

And even that advantage was soft, allowing Ron DeSantis to win the governor’s race and Gov. Rick Scott to oust incumbent Sen. Bill Nelson when Democrats failed to turn out liberal-leaning Latino voters.

“It is hard to say whether that alone would have made the difference, though I feel very confident in saying I believe the Dems would have won the governor’s race and U.S. Senate in 2018 if we had the voter registration advantage of the Obama years,” Steve Schale, a Democratic campaign strategist who directed Barack Obama’s first Sunshine State campaign, wrote in a recent blog post. “I am glad to see the party taking registration seriously this cycle.”

Defeated gubernatorial candidate Andrew Gillum earlier this year announced a goal of registering 1 million voters in an effort to turn that red tide blue in the 2020 presidential contest. Gillum (pictured) will rely on a number of left-wing advocacy groups to help him in the effort, along with millions of dollars left unspent from his campaign.

Additionally, the Florida Democratic Party has plans to spend $2.8 million to register 200,000 new voters before the presidential primary and says it already has 90 field organizers operating throughout the state.

The state party also is spending an additional $2 million on outreach and advertising to “voters of color” and recently launched “Democracia al Dia,” a weekly Spanish-language radio program in South Florida that aims to promote “Democratic issues,” the DNC said.

David Bergstein, the DNC’s director of battleground state communications, told RealClearPolitics that Democrats are working hard to build out the Florida’s field organization earlier than ever and will make the party’s health care policy differences with Trump a centerpiece of those efforts.

“Winning Florida is about mobilization and also about persuasion,” he said. “We’re doing the work now to put the infrastructure in place and share the facts about Donald Trump’s toxic health care policy and his efforts to gut coverage of preexisting conditions and give [tax] handouts to his rich friends.”

Dismissing Obamacare as a “disaster,” Trump in recent days has tried to move health care to the front burner, promising over the weekend that his administration will unveil “something terrific” in a month to overhaul the nation’s health care system.

While Trump remains unpopular among many Hispanic voters because of his immigration rhetoric, he is taking a lead from DeSantis and Scott, who performed well in heavily Cuban and Venezuelan Florida precincts. Trump has made repeated overtures to these constituencies with speeches in the state and through his tough stances against leftist regimes in Latin America.

Trump Campaign Manager Brad Parscale has argued that the Latino vote is not monolithic in Florida and says the campaign plans to have well-known leaders of these communities speaking out regularly on the president’s behalf.

As both sides try to build up their registration ranks, they are also already working to train and deploy thousands of volunteers and neighborhood organizers to help mobilize voters and get them to the polls on Election Day.

Chris Carr, a regional director for the joint Republican National Committee and Trump campaign, penned a memo on Monday noting that 4,400 supporters in all 50 states will be trained by the end of this week. He also said there had been 717 “MAGA meet-ups” so far across 50 states and three U.S. territories.

The DNC last week launched an effort to recruit and train young people to ensure that the eventual Democratic nominee has the support of “homegrown” field organizers in seven battleground states – Arizona, Florida, Georgia, Michigan, North Carolina, Pennsylvania and Wisconsin.

The program will have a special focus on recruiting young people “from communities of color” with the goal of training 300 organizers this summer and 1,000 overall.