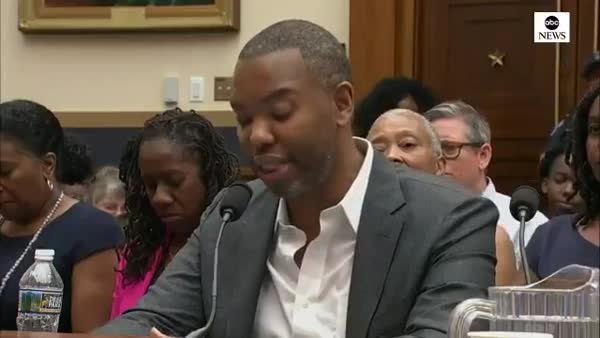 On Tuesday Mitch McConnell of Kentucky white-splained that the US has done what it can to make up for slavery.

Full @SenateMajLdr McConnell quote on why he opposes reparations—he cites civil rights legislation and the election of Barack Obama, among other things, when discussing how the U.S. has dealt with “our original sin of slavery.” pic.twitter.com/LiShqyRHZz

On Wednesday, the House Judiciary Subcommittee on the Constitution, Civil Rights, and Civil Liberties held a hearing on H.R. 40, the Commission to Study and Develop Reparation Proposals for African-Americans Act. Among those testifying was author Ta-Nehisi Coates, who directed his remarks straight at Mitch McConnell:

TA-NEHISI COATES: It is tempting to divorce this modern campaign of terror, of plunder, from enslavement, but the logic of enslavement, of white supremacy, respects no such borders and the guard of bondage was lustful and begat many heirs. Coup d-états and convict leasing. Vagrancy laws and debt peonage. Redlining and racist G.I. bills. Poll taxes and state-sponsored terrorism. We grant that Mr. McConnell was not alive for Appomattox. But he was alive for the electrocution of George Stinney. He was alive for the blinding of Isaac Woodard. He was alive to witness kleptocracy in his native Alabama and a regime premised on electoral theft. Majority Leader McConnell cited civil-rights legislation yesterday, as well he should, because he was alive to witness the harassment, jailing, and betrayal of those responsible for that legislation by a government sworn to protect them. He was alive for the redlining of Chicago and the looting of black homeowners of some $4 billion. Victims of that plunder are very much alive today. I am sure they’d love a word with the majority leader.

His full remarks are here, and the video of his full statement is below: