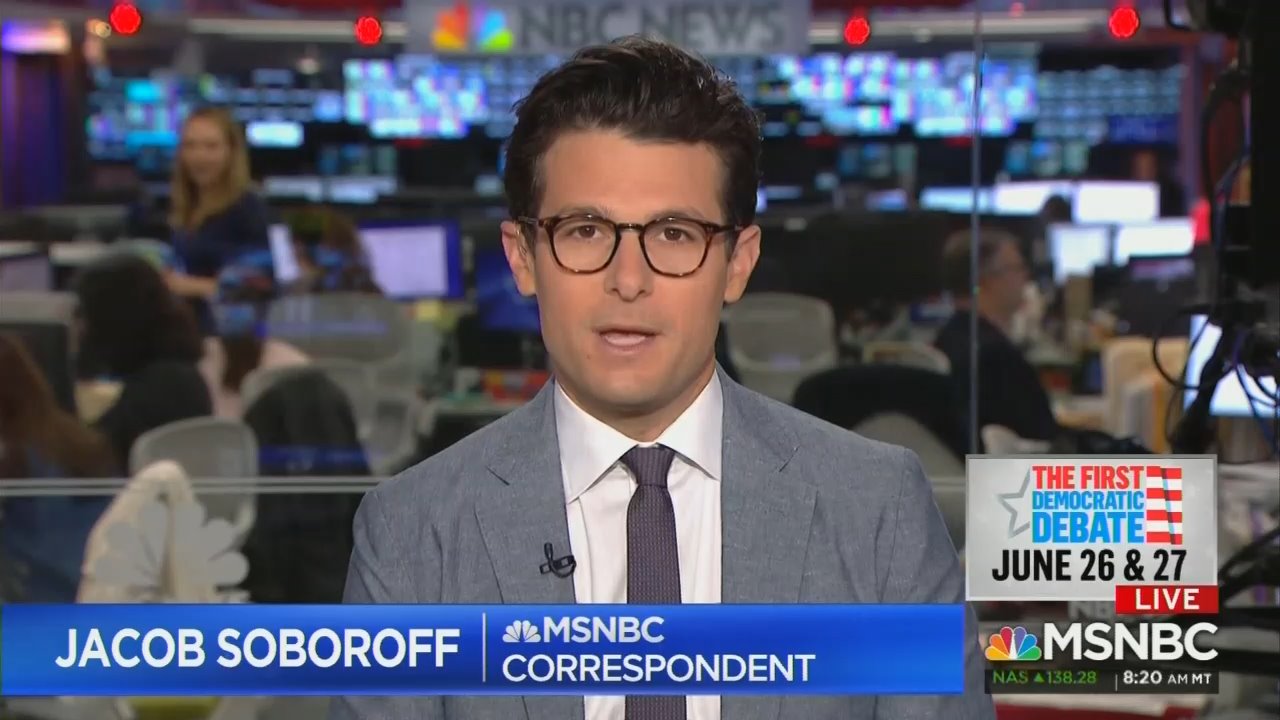 MSNBC’s Jacob Soboroff overreacted to President Trump’s tweet proclaiming that “ICE will begin the process of removing the millions of illegal aliens who have illicitly found their way into the United States.” According to Soboroff, a desire to invoke fear and cruelty motivated the President’s announcement of this “migrant roundup.”

Throughout the segment, the panel acted as if the President was specifically targeting Dreamers and parents of U.S. citizens in these deportations despite the fact that his tweet did not specifically say that he would be targeting those groups.

Soboroff appeared to have a hard time distinguishing between illegal immigrants brought to the United States as children and children born in the United States to illegal immigrant parents. Soboroff noted that “millions of undocumented people that are living in this country have American children before saying “they’re either dreamers or even younger than the dreamer classified kids.” For the record, the Dreamers were brought to the country as children; since they were not born here, they are not American citizens.

Maybe Soboroff’s “slip up” was an intentional effort to lump all of the illegal immigrants together in an attempt to confuse the audience. Nowhere in this segment did Jackson, Soboroff, or the other guest, former Deputy Assistant Attorney General Elliot Williams mention that aprroximately 80 percent of Central American migrants seeking asylum have their claims rejected.

Since it makes perfect sense to deport these people, it should have come as no surprise that they left out that important piece of information. After all, it does not exactly advance the “Trump is mean” narrative that Jackson coaxed Soboroff into talking about by asking him if he saw the impending deportations of millions of illegal immigrants as “potentially leading toward family separations.”

A transcript of the relevant portion of Tuesday’s edition of MSNBC Live With Hallie Jackson is below. Click “expand” to read more.

HALLIE JACKSON: So President Trump’s out announcing this round up of thousands of undocumented parents and kids tweeting, as you have seen, that I.C.E. will start removing millions of “illegal aliens,” in his words, who are currently in the U.S; removing them as fast as they came in, he says. But here’s the thing. Based on our reporting, the President may be talking about something that’s been in the works for a while; and that several sources tell us is probably an exaggeration. Remember, Immigrations and Customs Enforcement already arrests migrants inside this country but deportation numbers aren’t as high partly because of overcrowded detention centers. The Washington Post reports the President and his senior immigration adviser, Stephen Miller, have been pushing Homeland Security officials to arrest and remove thousands of migrant families but officials told the Post the operation was not imminent. I’m joined now by MSNBC’s Jacob Soboroff and by Elliot Williams, former Assistant Director of ICE and former Deputy Assistant Attorney General. Thanks to the both of you. Jacob, let me start with you. Why announce the raids now? And if they’re carried out, do you see them potentially leading toward family separations?

JACOB SOBOROFF: Well, yes is the simple answer, Hallie. You can definitely separate families by doing interior removals particularly because many of the millions of undocumented people that are living in this country have American children. They’re either dreamers or even younger than the dreamer classified kids. Is it possible? No, it isn’t operationally possible to deport millions of people…

JACKSON: The President may be trying to motivate his own homeland security officials, Elliott, but give us a context/fact check here on this one, as I know you are eager to do.

ELLIOT WILLIAMS: Well, okay, just like Jacob said, 400…I.C.E. has approved or removed about 400,000 people a year, right? When you start using the rhetoric of millions, you’re pulling in the families and the small business owners and frankly people who have been here for decades and decades and decades. Now, that’s a policy choice. And if that’s the policy choice they want to make, have at it but it’s just a continuation of the President’s immigration policies that go back all the way to the, to the Trump Tower press conference back in 2015 calling Mexicans rapists and so on. It’s a continuous through line that we have now seen for several years and it’s not changing.

JACKSON: Jacob, dive in a little deeper to what you were talking about regarding whether this is even feasible or like realistic on this front because when you look at the numbers, right, in 2018, I.C.E. reported deporting just about 256,000 immigrants and migrants. In 2012, under President Obama this was the all-time high, and even the all-time high, as you can see on the screen here, was close to 410,000. Millions, as you point out, would be a massive exponential jump from that.

SOBOROFF: It’s not going to happen. It can’t happen literally because of the humanitarian crisis that is occurring right now on the southern border; which many people say this administration has exacerbated by not letting people come into the country legally through ports of entry. The bed space just isn’t there to round up and put in I.C.E. detention all of the people that the President says he wants to put into those beds. If you can’t put them into the beds before you’re going to deport them, you’re just…it’s just not going to happen. You don’t have enough agents, you don’t have enough officers to go out into the field, Elliott knows this better than anyone. The President is doing this for one reason and one reason only, to send a shiver down the spine of the 11 million people that are in this country who are undocumented because he knows he’s not going to be able to do what he’s saying he’s going to do.

JACKSON: To that point, Jacob, and Elliott, I want to ask you about this, the Post reports that supporters of the plan so that includes Steven Miller, who we’ve talked about, who we know is the President’s top immigration adviser, the I.C.E. Deputy Director, others, have argued forcefully that “a dramatic and highly publicized operation of this type will send a message to families that are in defiance of deportation orders and could act as a deterrent.” You have experience.

JACKSON: Is this true in your experience?

WILLIAMS: Well, it is but here’s the thing. They tried to use separating families and ripping, as we learned yesterday, a 4-month-old away from its family as a deterrent for more people coming to the country. This is just a slightly more kosher version of it but what they’re trying to do is use the immigration process to deter people. This is far more about economic conditions in Guatemala than it is about a failure to enforce immigration law, or like the individual at the beginning of the show had said, you know, actually take care of the integrity of the system. This is not about integrity. This is about scaring people from coming to the country and using immigration as a hammer. And it’s just not…if it’s about integrity, I’m all for it. Let’s fix the system and then let’s figure out a way to work it out but this is really about the, the same kind of fear that has driven the Trump, the administration’s approach to immigration…banning Muslims from the country, as the President said on the campaign trail and it’s just a continuation of that going back to 2015.