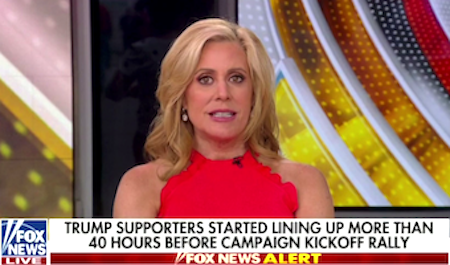 Never mind that Fox News’ own polling found that only 36% of registered voters would be pleased or enthusiastic if Donald Trump gets re-elected. Fox News did its best to make you think that most of America couldn’t be more thrilled about his 2020 campaign kickoff in Orlando tonight.

Of course, Outnumbered cohost Melissa Francis didn’t mention that Trump had lied when he falsely claimed, “Thousands of people are already lined up in Orlando” yesterday. But she did her best to make it appear true without actually having to lie, herself, by announcing, after a Fox News Alert, “Lines stretching around Amway Center in Orlando, Florida as President Trump is preparing to kick off his re-election campaign with a rally tonight.”

There’s no doubt there are very enthusiastic Trump supporters in Florida and elsewhere. But they do not and never have represented a majority of voters. But none of the four cohosts nor the show’s #OneLuckyGuy spoiled the happy talk with that reality.

Instead, Francis said that people had been lining up in Orlando “more than 40 hours before the rally kicks off” and that the campaign said it had received “more than a hundred thousand ticket requests for the arena which holds 20,000 people.”

B-roll footage of the supporters outside the area ran throughout the discussion. We also got some direct comments from the Dear Leader Faithful.

One supporter, dressed in an American flag shirt, talked about how excited he is to see Trump. “People were partying, there were trucks playing music. It was awesome, non-stop party. I loved it.” A pair of women dressed in similar blue vests with white stars, flag kerchiefs around their necks and white hats with similar adornments said they had arrived at 6:30 in the morning and were third, after an arrival at 2:30. A fourth attendee spoke about how “very, very unified” Trump supporters are. “We love him and we love each other and we accept each other and we come from all walks of life,” she said.

Francis excitedly regurgitated Trump’s tweet that “Republican enthusiasm is at an all time high” and “People have never seen anything like it.” It’s another Trump lie but why spoil the mood with truth?

When asked if Trump will win Florida, the show’s #OneLuckyGuy, Charles Hurt deflected, saying, “Trying to look at the polls today is sort of absurd” and Trump “is in a very, very good position to win.”

Also not mentioned? The huge Baby Trump balloon was also on hand as part of a counter-demonstration called the “Win with Love Rally.”

Republished with permission from Newshounds.us