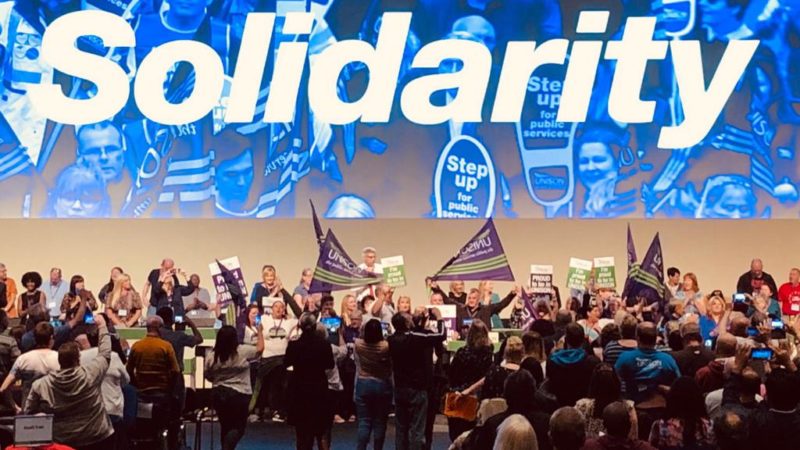 Below is the full text of the UNISON annual conference opening speech made by general secretary Dave Prentis.

Brexit has unleashed the stench of far right extremism, both on the streets and in workplaces across the country. It’s meant a rise in anger and distrust. Public service workers from Europe have had to suffer cheap jibes and racial slurs, and been told to go home. Attitudes we thought had faded long ago are now back with a vengeance, with new faces spouting age-old hatreds.

Sometimes the fight against bigotry, racism, Islamophobia and antisemitism can feel like an uphill struggle. But if we are bold and strong and stand in solidarity, we will win. But if we keep our heads down, keep it safe, the result is dire. It means narrow-minded nationalism and a no-deal Brexit.

UNISON has always opposed hate – in the past that’s meant tackling the BNP, UKIP, the EDL, and now the hateful violence of the Football Lads Alliance and toxic Tommy Robinson. A no-deal Brexit is looming on the horizon but that would jeopardise the Good Friday Agreement and peace in Northern Ireland. There must be no hard border across Ireland and no watering down of equality of citizenship.

The UK needs a grown-up relationship with Europe and that means getting a deal. No deal would be a bad deal for everyone and the worst of all worlds for public service workers. It would mean vulture capitalists from across the Atlantic waiting in the wings to destroy our public services.

The deadlock must be broken, but the politicians have failed so far. And if all else fails, the only option left must be to take the decision back to the people, where it belongs.

There’s a saying that all political careers end in failure. And for Theresa May, it was nothing but failure from start to finish. She is a Prime Minister who has achieved nothing in office, but who has done so much damage.

But if you think that’s bad, wait until you see what’s coming next. The Tory leadership contest – a cross between Britain’s got no talent, and I’m a nonentity, get me out of here. A rogues’ gallery of chancers and on the top of that list is the biggest chancer of all – Alexander Boris de Pfeffel Johnson.

This is a man who called a quarter of a million pounds a year from the Telegraph ‘chickenfeed’ and who now plans a tax cut for the richest in society, while the country’s care services are in meltdown. The damage he could cause doesn’t even bear thinking about.

The country needs a general election so the future of this country can be decided by the people, not the out of touch elite of the Conservative Party. A general election that will sweep away this terrible government, that will see the Labour Party enter Downing Street.

I have high hopes for the next Labour government but we’ll never get one while there’s division and distrust. Divided parties never win elections. Public service workers need a Labour government like never before.

A Labour government has the capacity to transform the country, the economy and society, and to embody our values, be a vehicle for our hopes and dreams. But I also have demands of Labour. All privatisation and all outsourcing must end immediately when they take power. And within a year all privatised services and people must be brought back in-house, and back where they belong.

This has been a great year for UNISON. For many years we’ve been the biggest public service union, but now we’re the biggest union in the UK and Ireland, and the fastest growing union in Western Europe.

In the last year we’ve been forced to take industrial action time and time again. It’s a big step for any member and a tough call for any branch. There’s been more strikes in our union than in every other union put together. And that’s despite the trade union act.

Also at Sirona, Staffordshire University, the University of Bradford, Bolton iFM, the Alternative Futures Group, the Environment Agency, Leigh Academy Trust, AQA, Sodexo, and many more. UNISON is proud of all them and what we all stand for. We’re Britain’s biggest and Britain’s best union.

View all articles by Dave Prentis